Everything was uncertain last April when Freddy’s Frozen Custard & Steakburgers was slated to open a new restaurant in Jackson, Tenn. Dining rooms were closed. Business was down everywhere because of the COVID-19 pandemic. It was only at the urging of the franchisee there that the restaurant opened at all.

It proved to be a good decision. Customers may have been avoiding the inside of restaurants, but they weren’t avoiding their drive-thrus. Diners lined up by the dozens outside of the location, and at one point, there were 129 cars waiting for one of the restaurant’s steakburgers.

“We’ve had situations where we had 50 to 60 cars, but 129 is off the charts,” Chief Operating Officer Scott Redler told Restaurant Business last year.

The drive-thru was a pandemic hero, proving to be one of the safest methods for getting food into the hands of consumers. Its availability in late March and April of last year proved vital for police officers and health care workers who still needed a bite to eat on their way to work.

When consumers sought a break from the monotony of the quarantine, they visited the drive-thru. The lanes fueled sales at fast-food chains all year long, in many cases more than replacing the business lost by the closed dining rooms.

The industry’s response has been unsurprising: They want to build more drive-thrus, and they want to upgrade the ones they have. The pandemic has unleashed a wave of innovation in the drive-thru unlike any seen in the decades since they first appeared on the American landscape. It has also ignited a real estate war that is widely expected to drive up prices and further push new, interesting models of what had been a lit menu board with a speaker and a window.

“Throughout the pandemic, where did guests turn? They turned to off-premise,” Del Taco CEO John Cappasola said. “QSR drive-thru was key, especially when you had dining rooms closing down. It just felt better for consumers.” 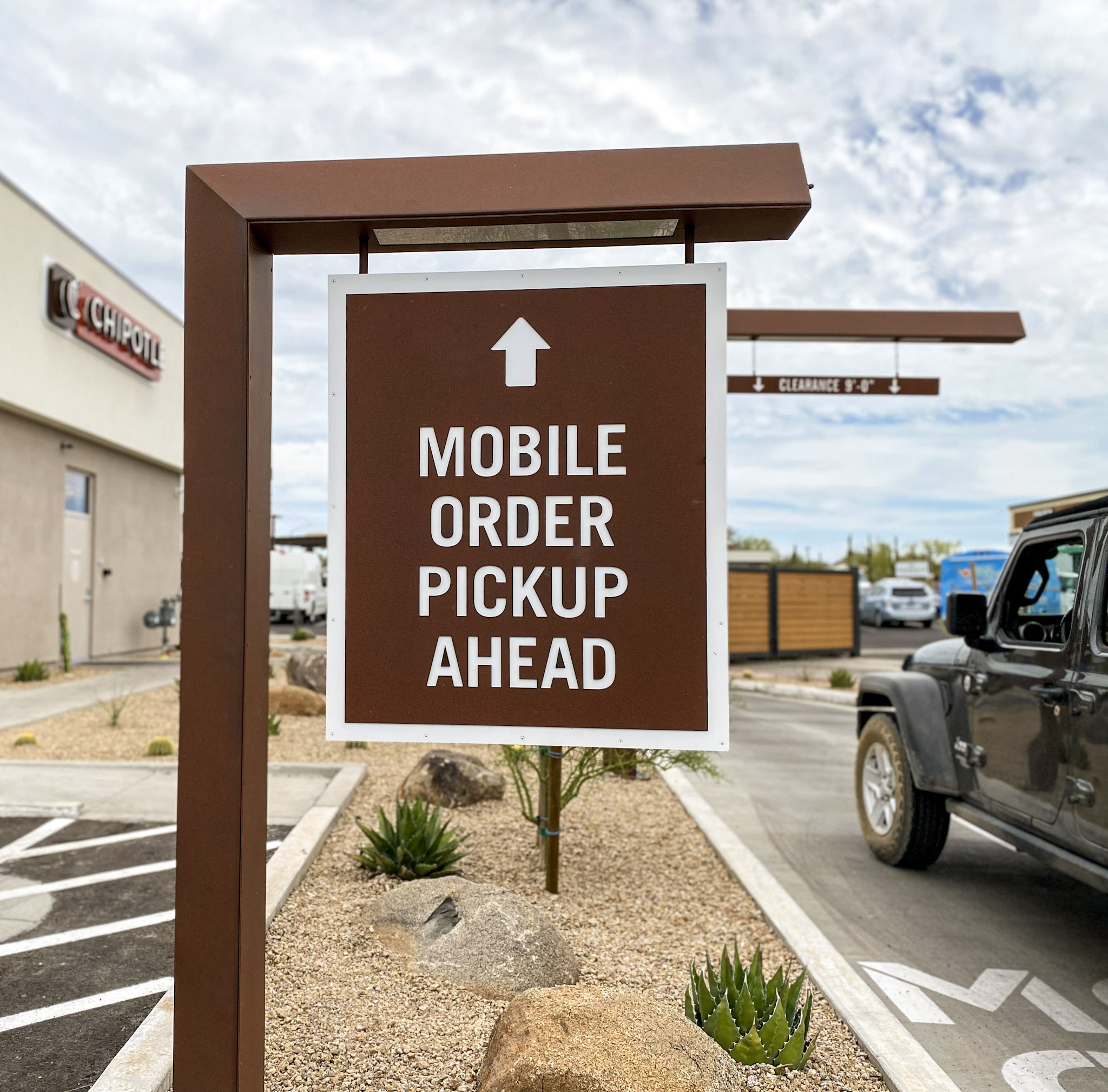 Drive-thrus have been around for about as long as the mass-produced automobile—the first one opened in Texas in 1921. Robert Peterson furthered the trend when he opened the first Jack in the Box 30 years later.

Companies built the restaurants around commuting patterns to make it easier for drive-thru customers to access the locations on their way to and from work. And in an era in which consumers have been busier than ever, the drive-thru itself proved popular. McDonald’s, for instance, generated 70% of its sales in the pre-pandemic era from that window.

At the same time, however, the lanes generated a backlash from local governments, neighborhoods and even other restaurant executives who objected to the very idea of a drive-thru. Many fast-casual chains, not all that willing to appear like their quick-service cousins—to the point that many abjectly refused to call themselves “fast food”—strenuously avoided the windows, even though they’d been found to increase per-unit sales.

Local government resistance had been growing, with planners citing the impact of so many idling cars on the environment along with disturbances to nearby neighborhoods. The City of Minneapolis famously decided to refuse any new drive-thrus in 2019. But it wasn’t the only municipality to voice objections. “We’ve run into it more and more,” Taco John’s CEO Jim Creel told the Restaurant Business podcast “A Deeper Dive” in July.

Yet there were also signs some of the resistance to drive-thrus within the restaurant industry itself had been waning. Panera Bread, which does a lot of its business in the morning, has been adding them for years. Fast-casual pizza chains like Blaze Pizza started adding them. And Chipotle Mexican Grill experimented with using a drive-thru lane for mobile orders, which it calls the Chipotlane. 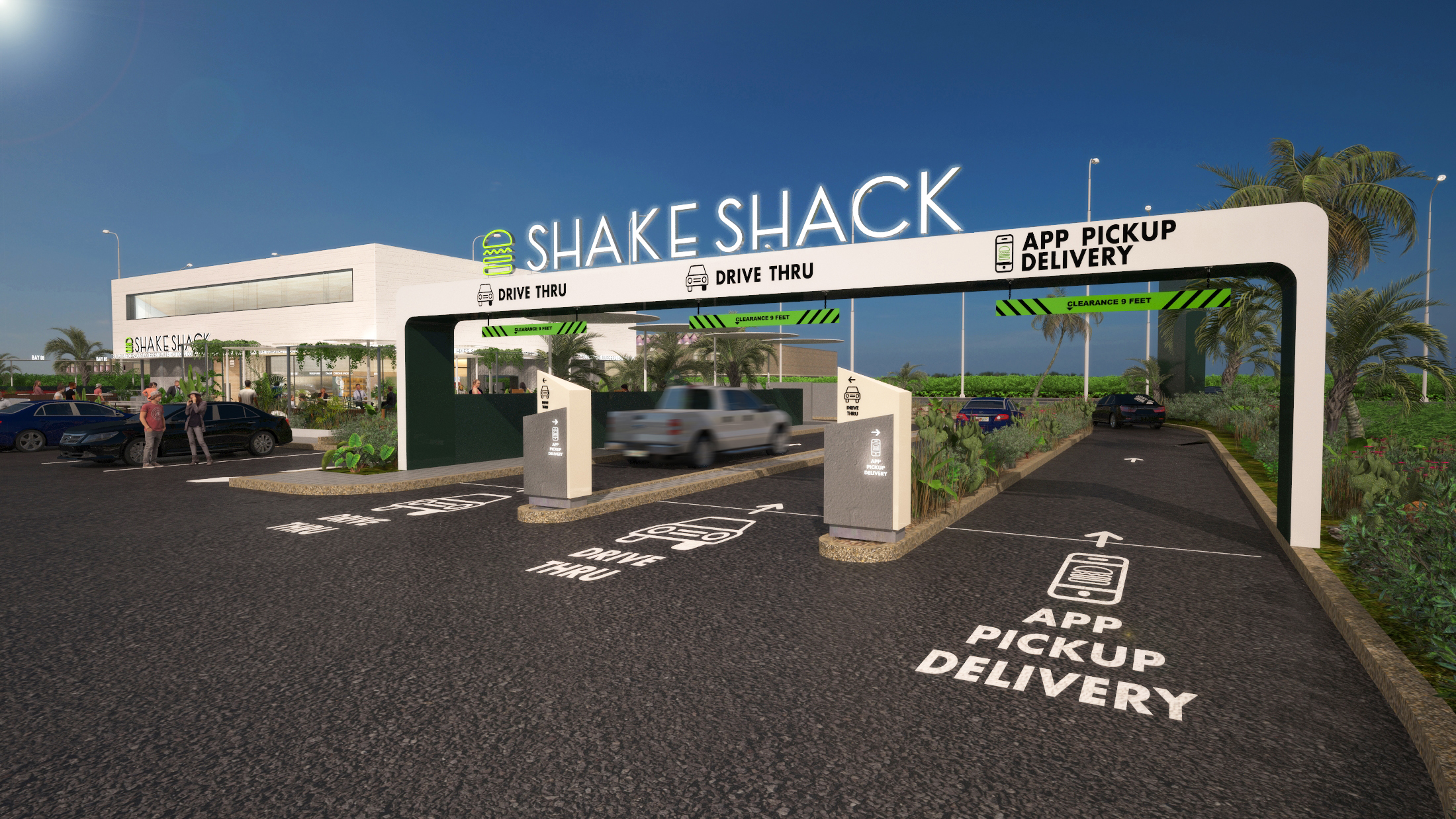 And then the pandemic hit

But nothing has shifted the momentum of the drive-thru quite like the pandemic. Drive-thrus were great big indications that a restaurant was open at a time when many restaurants were closed. Their perceived safety ensured customers wouldn’t avoid them out of fear of getting sick. And consumers had money to spend and weren’t spending it elsewhere.

While they didn’t perform quite as well as delivery-heavy concepts like pizza chains, fast-food concepts with drive-thrus performed admirably coming out of the pandemic and had largely recovered by the end of the year. Same-store sales at McDonald’s, for instance, rose 5.5% in the last three months of 2020. “We moved something like 300 million additional cars through our drive-thrus,” McDonald’s CEO Chris Kempczinski said in January. “And if you had asked me a few years ago, I was thinking we were pretty maxed out on the drive-thru.”

But it’s with chains not typically associated with drive-thrus where their pandemic relevance was demonstrated. Same-store sales at Starbucks declined 5% in the last three months of 2020. Its drive-thru sites saw increases—suggesting a significant gap in performance between those restaurants with the window and those without. The company is now shifting much of its development toward suburbs where drive-thrus are more common.

“When you look at the most productive model, it’s the drive-thru,” Roz Brewer, the now-former chief operating officer at the Seattle-based coffee giant, said in January.

At chains such as the California-based Wienerschitzel, the drive-thru would prove vital. “When John Gallardi in 1961 started the company, shortly after he added drive-thrus,” CEO Cindy Culpepper said last year. “He built an A-frame restaurant and put the drive-thru in the middle of the restaurant. Unbeknownst to us, we were preparing for an event like we have now.”

Before the pandemic hit, the drive-thru-only chain operator Checkers was in a financial workout, hoping to avoid bankruptcy. The pandemic helped spur a turnaround. Same-store sales rose 14% in the third quarter and 11% in the fourth quarter. The company finished the year having received a cash infusion from its owner. “We were ideally positioned to take advantage,” CEO Frances Allen said in January.

Lines at restaurants with drive-thrus have become commonplace. At the Freddy’s in Jackson, the restaurant sought the help of local police. In some other places, it’s led to legal action. In December, Mario Kiezi, the owner of a shopping center in Toledo, sued the Chick-fil-A next door because the restaurant’s long lines had stacked into the center’s parking lot.

The future of the restaurant industry is currently an empty lot next to a Chipotle Mexican Grill and across the street from a HyVee grocery store in suburban Minneapolis.

There, Taco Bell franchisee Border Foods will build a new two-story restaurant. That will enable the building to take up less space so more room can be devoted to its four drive-thru lanes—one traditional drive-thru and three additional pickup lanes. The kitchen will be on the second level to deliver food for customers to pick up on the ground floor. There will be no seats.

The new Taco Bell, when it is finally built, will be part of a generation of upgraded fast-food drive-thrus that arise out of quarantine. In the past few months, just about every major fast-food restaurant chain, and a few in other sectors, have announced new prototypes, all with upgraded drive-thrus—including multiple lanes, artificial intelligence-enabled menu boards and other upgrades.

The moves promise an era of major innovation for a service line that had largely remained the same for decades until relatively recently—when high-volume chains like Chick-fil-A, McDonald’s and Portillo’s looked to technology and other innovations to address drive-thru demand.

Some of the advances are complex. McDonald’s bought the technology company Dynamic Yield two years ago for $300 million—a technology that enables suggestive selling at the drive-thru. The improvements were added throughout the U.S. system just in time for the pandemic. The company is now eyeing automated order taking at the window and other advances.

“We’ve been refining the drive-thru for more than 45 years,” Mason Smoot, chief restaurant officer for McDonald’s USA, said in November. “We know better than anyone what drive-thru customers care about. It starts with speed of service.”

Many other chains are taking similar steps. Burger King has vowed to replace all of its menu boards electronic boards equipped with A.I. Double drive-thru lanes or even more have been proposed at chains like Del Taco, Taco Bell, KFC and others.

And drive-thru-only locations—which chains had generally shunned before the pandemic—are becoming more common. Wendy’s, McDonald’s, Burger King and Del Taco all have that option as part of new prototypes.

While these ideas were developed at a time when drive-thru business was at peak demand, many operators believe these strategies will remain vital going forward. “Convenience is not likely to go backward,” Cappasola said. “Usually, when consumers move toward adapting technology for convenience, it accelerates. It doesn’t go backward, typically.” 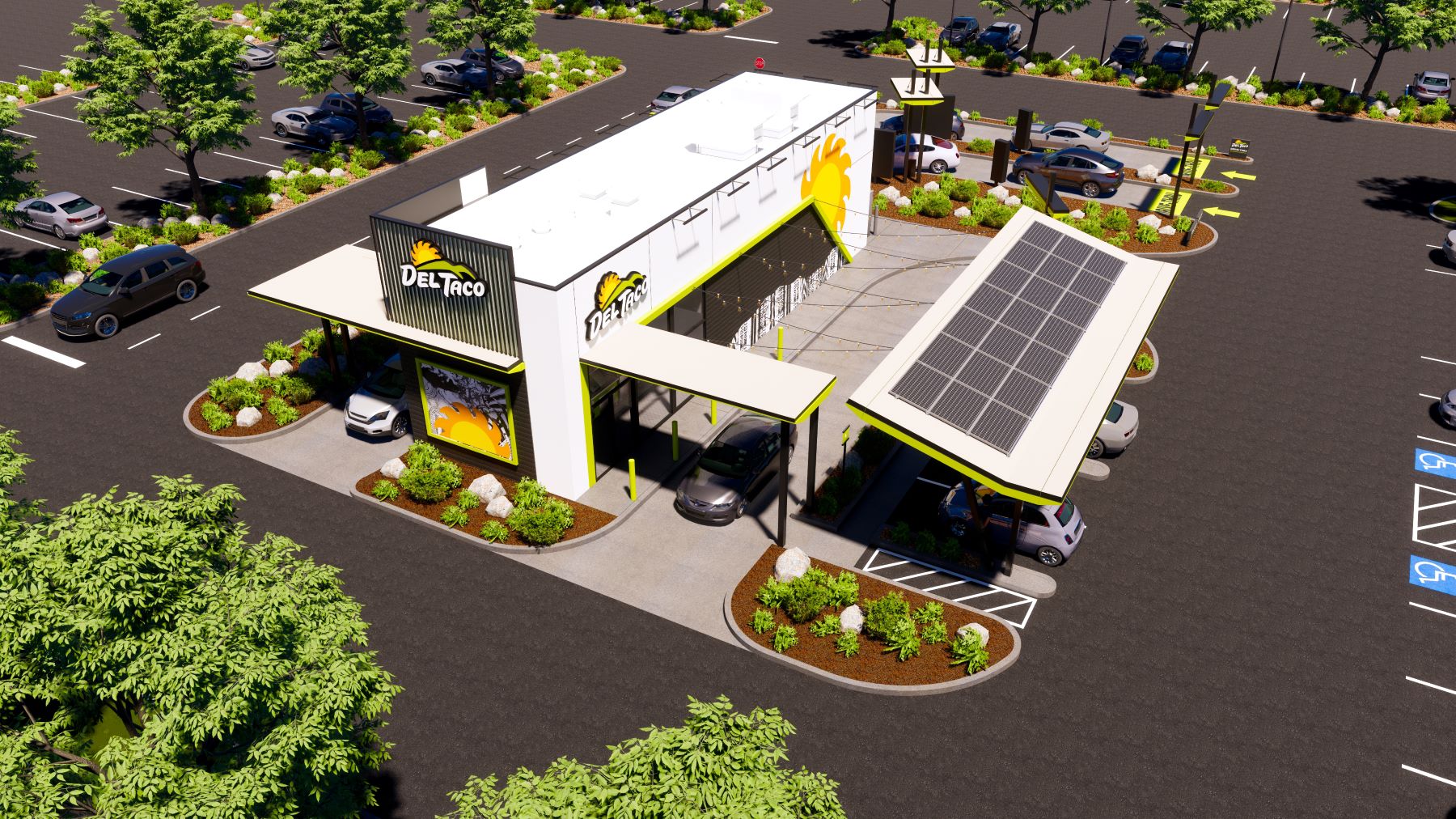 Del Taco’s prototype also provides it with numerous options based on available real estate—the model, in fact, is called “Fresh Flex.” The options take up less real estate and have flexible kitchens that give operators options for development.

That’s a vital consideration in the future. Unsurprisingly, the pandemic-fueled demand has only made drive-thrus more attractive. With more types of chains—including Shake Shack—building these units, real estate prices for drive-thru sites are expected to soar. And few locations are expected to come available.

“Those opportunities are going to be few and far between,” said Barry Wolfe, senior managing director of investments for Marcus & Millichap.

Indeed, the market was highlighted last year when Chipotle contacted sites even before they closed, offering to buy out their leases. Chipotle is aggressively developing restaurants with one of its mobile-order-focused Chipotlanes.

By developing prototypes that are flexible, operators could find more spots. But the prototypes may do something else: Assuage concerns by the aforementioned cities, worried about long lines. By having restaurants with more takeout options, such as curbside pickup or mobile order parking, perhaps the drive-thru won’t be as necessary.

“That’s part of the evolving landscape in the U.S.,” said Brian Cahoe, chief development officer for KFC U.S. “We’re trying to appease them by having less of a drive-thru stack. That’s what the convenience of skip-the-line parking, running in, grabbing it and leaving provides.”

UPDATE: This story has been changed to correct Scott Redler's title.