Zoes Kitchen has lifted the curtain on a new prototype that aims to get customers in and out faster while providing more reminders that its Mediterranean specialties are freshly made.

The new fast-casual format also features a menu sporting on-tap wine and made-to-order Moroccan sangria as well as a line of health-oriented all-natural drinks. Among the featured new options are pita sandwiches, bowls and salads made with baked rather than deep-fried falafel balls, a nod to health that will become a chainwide feature next month, Zoes said. 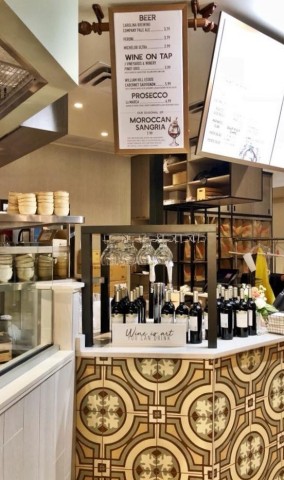 Key format changes include the addition of a pickup area for takeout orders. The dedicated space will also be used to assemble catering orders.

The floor plan makes the kitchen more visible so customers can watch their meal being prepared and catch the aroma of the ingredients, Zoes says. It also noted that tweaks were made in the kitchen to bolster efficiency and cut serving times, but did not disclose the particulars.

Takeout customers should be able to get out of the restaurant quicker because of the new dedicated pickup spot, the chain indicated. The to-go station “will allow guests to more conveniently find and pick up their online or call-in orders,” Zoes CEO Kevin Miles said in a statement.

Another key feature of the Raleigh, N.C., prototype is the patio. Miles described it as being “more integrated into the dining experience.”

The store opened today. “This will be a great testing ground for us as we look at rolling out new stores and remodeling existing stores in the future, as well as for new menu and beverage items,” Miles said.

The chain did not reveal how the cost of the new prototype compares with the price of earlier designs. Similarly, it did not quantify the expected impact on operating costs.

Zoes finished 2017 with about 235 restaurants, all but a handful company-operated. Around 100 of the units provide delivery.

Management attributed a 0.5% decline in same-store sales for the quarter ended Oct. 2 to hurricanes Harvey and Irma. The company announced last year that it intended to slow unit development during 2018 to focus on key strategic objectives, particularly changes in its menu.