Day 1
Bagels for breakfast. Mac and cheese for lunch. Another bagel for a snack in the afternoon. We go into dinner with me thinking primarily about getting protein in them. We do salmon, green beans and rice. They devour the rice and have seconds, taste the salmon and seem to like it—but act like they’re on Fear Factor—and gag on the green beans. 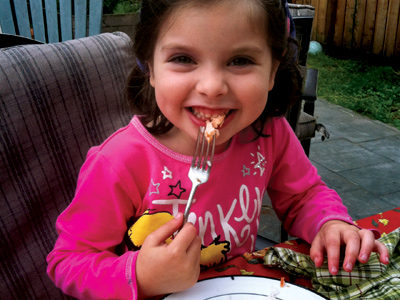 Insight: We don’t look for a balanced diet in each meal for the kids. We’d go crazy trying to do that. We look for balance across the day. Anything restaurants could do to make it easier to build a meal based on the kids need for more protein, more veggies, more dairy, whatever they might be lacking that day I would embrace.

Day 2
Felix was on a playdate around lunchtime. I gave Wren a couple of Trader Joe’s items: Apple/Carrot Crushers, which are squeezable packages of fruit/vegetable sauces. Great for getting veggies in. And Baked Cheese Crunchies, basically Cheetos with a healthy halo. For a snack later I gave her a Z Bar, the kid’s version of the Cliff Bar.

Insight: I don’t know that we feed our kids anything healthier than other parents, but we certainly buy products that make us think we do. As much as I hate to admit being affected by packaging, I am. I imagine it’s partly for myself and partly to advertise to others that I am doing the right thing for my kids.

Day 3
7:00 pm: This is usually how we end up eating out: Christine and I are both beat and we haven’t planned ahead well enough to have something easy to cook. We go to Laughing Planet, a local burrito chain. Kids get chips and salsa, mini cheese quesadillas and water.

Insight: We very rarely go out to eat just for pleasure. We do it because we can’t face the alternative at that moment.

Day 4
It’s Felix’s birthday today. Getting to choose what you eat is a big deal for the kids on their birthdays. Unsurprisingly Felix picks McDonald’s for lunch. His cousin William comes with us (Wren goes to her aunt’s house). William says he’d rather go to Burgerville (a local QSR). We hit both.

Red Robin for dinner, also Felix’s choice. Mac and cheese all the way around. Felix tells everybody he can before we go that they sing a special happy birthday song at Red Robin. He keeps asking the server when they’re going to sing him the song. They bring out a special sundae at the end of the meal and sing the song. Bliss.

Insight: Why do you like Red Robin, Felix? “They have good food. I usually get mac and cheese with fries. I like the video games they have in there. The activity things they have. I like looking at the picture on the wall of Spiderman. I like that it’s close to a McDonald’s.” It goes without saying that McDonald’s reigns supreme. I wish, like William, Felix preferred Burgerville, just because it meets our values better. The power of the toy in the Happy Meal that ties in with a popular movie or TV show is enormous. We haven’t touched on Chuck E. Cheese, but forget about it. His love for that place is off the charts and it’s because of one thing: he gets stuff.

Day 5
His birthday was yesterday, but his birthday party is today. Christine made a cake with Wren. She puts pureed beets in the chocolate cake batter. The flavor is completely hidden, but it gives the cake a nice, rich texture and another way of getting some veggies in their system.

Insight: I’m really surprised restaurants have not leveraged this trend. There are a number of cookbooks and plenty of websites that feature recipes where veggies are hidden in food for kids. We would be all over a restaurant that did this.

Day 6
Out of curiosity, I asked Felix to list all the restaurants he could name. I won’t go through them all, but what stood out were the places he knew about that we’d never been to and had never talked about. They watch TV, but it’s mainly stuff from Netflix, so they aren’t exposed to many commercials either. I asked how he knew about these places (they were Denny’s, Taco Bell, Pizza Hut and Jack in the Box) and he said he heard about them from friends.

Insight: It was alarming when Felix first went into kindergarten how much of popular culture he was suddenly exposed to through his peers. We no longer controlled the flow of information. He would come home declaring preferences and tastes for things he’d never seen before. Finding out about new toys, new movies and new places to eat comes from his friends. And it’s a commodity among them. The kid who has the new, cool thing to tell his friends about gets attention. Word of mouth marketing is an extremely powerful force in that age group.

Day 7
Like most days, for breakfast, lunch and dinner Felix and Wren were allowed to choose between milk or water to drink. Sometimes we let them have juice, but because of the cost and sugar content we keep it to a minimum.