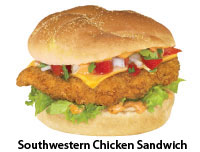 Ideation
The driving forces: portability and bolder flavor profiles. They also wanted to broaden their occasion base by adding chicken. The culinary team was given the charge to “break out of the Captain D’s mold.” In other words, no tarter sauce. The three sauces they developed “all deliver a big umami hit and complement both proteins,” says Peter Gibbons, VP of product development.

Discards
Honey Mustard (“a bilious combination with fish,” laughs Gibbons), Thai Peanut (too far out) and Lemon Dill (not bold enough, but saved for later). Also, ciabatta and brioche. “They married well with the proteins but were a bit of a stretch for our guests.” Plus, the chosen Kaiser roll was already in Captain D’s system.

Prototyping
Gibbons wrote formulas for the sauces and sent them off to suppliers. After getting samples from several of them, the sauces were all sent to one vendor to develop—a company Gibbons had worked with before. Aside from some tweaks to salt level, they were ready to go.

Rollout
One hundred and fifty guests sampled the sandwiches to solid reviews. New training was developed and new toasters were ordered. This summer, the sandwiches hit two markets as LTOs. At first, the chicken sold better than the cod, but several weeks in, sales flip-flopped. Spicy Bayou is the most popular style with the cod and Bacon Ranch with the chicken.