Soy sauce is both remarkably complex and extraordinarily simple: complex because it contains more than 300 individual flavor components and amino acids that give it a distinctive flavor and bouquet; and simple because it is made from just four ingredients—water, wheat, soybeans and salt—transformed through fermentation. 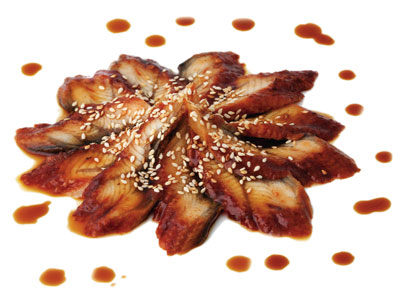 The production process begins with the selection of the finest soybeans and wheat. Next, a proprietary starter, or seed mold, is introduced and the mixture is allowed to mature. The resulting culture, or koji, is then transferred to fermentation tanks, where it is mixed with a brine solution to produce a mash called moromi.

Perhaps the most important ingredient in soy sauce is time. It takes six months for the full flavor, color and aroma to develop. Once fermentation is complete, the matured mash is pressed to extract the raw soy sauce, which is then refined, treated with heat and packaged.

Soy sauce offers the advantage of umami—the "fifth taste." Along with the traditional sweet, sour, salty and bitter taste sensations, it has been described as "savory" or "brothy." Umami is a taste that can't be created artificially.

The types of molecules responsible for umami vary from one food to another. When chefs pair two umami-rich foods, these molecules combine to produce more than the sum of their parts, creating "umami synergy"—the "two-plus-two-equals-wow!" effect you get when you pair soy sauce with beef, pork, chicken, seafood, mushrooms or tomatoes. In other words, soy sauce can be "instant umami."

After adding an umami-rich flavor enhancer like soy sauce, you'll perceive an improvement in the dish before you detect the enhancer. For example, just a few drops of soy sauce in, say, black bean chili or meatloaf can deepen the flavor without making the dish taste Asian.

What makes soy sauce different from other umami ingredients is its versatility. A chef wouldn't add a pinch of Parmesan cheese or chopped mushrooms to just anything. However, naturally brewed soy sauce, which contains more than 300 distinct flavor and aroma components, is easily incorporated.

The key to creating synergy between umami-rich ingredients and soy sauce is balance. In most cases—especially when working with non-Asian foods—you want the soy sauce flavor to remain in the background, so that you perceive its salty, sweet, meaty qualities without identifying a pronounced soy sauce taste. So go slowly at first, as you would with salt or pepper, seasoning to taste until you get the proportions right.

Start with these quick umami-enhancing ideas:

Chinese cooks have had 2,500 years to explore the nuances of soy sauce—they invented this fermented condiment that both preserved and flavored food. Later, the Japanese improved the recipe by adding wheat, which yields a more
delicate taste. Here's how this "master sauce" has been used in Asian kitchens.

Japan: For sushi, the dipping sauce is usually straight soy, but for sashimi, lower sodium ponzu is preferred. Ponzu is made with soy sauce, mirin (rice wine), sake, bonito flakes and konbu (giant kelp). Chefs make this sauce in quantity, strain it and age it for months.

Singapore: Soy sauce mixed with sesame oil is an essential dipping sauce for one of this island's signature dishes: Hainanese Chicken Rice, a poached chicken served with broth-cooked rice and many condiments.

Soy sauce in the American kitchen

Soy sauce can be the secret weapon that gives dishes greater depth and complexity. Aware of umami, culinarians are reaching for soy sauce when a dish needs salt...plus a little something. It's a two-for-one flavor enhancer.

Consider some of these possible uses for soy sauce in the American kitchen: