Although Puerto Rican cuisine shares similarities with that of other Latin and Caribbean countries, it boasts some unique characteristics. The island is a melting pot of Spanish, African and Amerindian cultures that blended together to create a cooking style called "cocina criolla." The style's roots date back to the indigenous Arawaks and Tainos, who were eating corn, tropical fruits and seafood when Columbus arrived in 1493. The Spanish added beef, pork, rice and wheat, and their African slaves contributed okra, pigeon peas and plantains. When Puerto Rico became a U. S. territory in 1898, American foods filtered in. 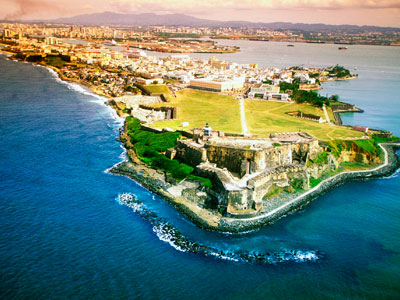 "Sweet-and-salty is Puerto Rico's main flavor profile," says Wilo Benet, a renowned San Juan chef and restaurateur. "There's not a single recipe in the traditional cuisine that's intended to be spicy—which is how Puerto Rican differs from other Caribbean cuisines." That said, a condiment called pique is often served on the side to spice things up if desired. But the "mother sauce" of Puerto Rican cooking is sofrito. It's a seasoning base dominated by yellow onions, green bell peppers, culantro and cumin. "This sofrito is green, not red as it is in the rest of the Caribbean," says Elizabeth Johnson-Kossick, chef-instructor and Latin cuisine specialist at the CIA's Center for Foods of the Americas in San Antonio, Texas. Another difference—seafood figures less prominently than pork, chicken or beef, she notes. Double starch—starchy vegetables incorporated into doughs, for example—appears in signatures like alcapurrias and pionones.

At his fine-dining restaurant Pikayo, chef Benet's mission is to refine technique and presentation without sacrificing authenticity. His pionones, for example, are lightened with a little cream cheese and made in miniature molds, and his mofongo starts with the traditional garlicky mash, but he purees the cooked green plantains in the food processor and adds bacon instead of pork cracklings "to keep the nice yellow color." It's served in saffron broth topped with jumbo shrimp. For the classic Bistec Encebollado, tenderloin stands in for top round, and contemporary items such as Mango Gazpacho with Coconut Rum and Foie Gras with Ripe Plantains, Micro Cilantro and Truffle Honey show up on the menu. But one of Benet's favorites remains flourless fried chicken, just the way his grandmother made it. The chicken is marinated in adobo, garlic, cumin, oregano and a little green sofrito, then fried in a skillet until the skin gets very crispy—no flour or breading is used for coating.

Mom-and-pop Puerto Rican restaurants serve down-home dishes such as arroz con pollo, pigeon pea rice, tostones and an island invention—the Tripleta. The last is a sandwich similar to the Cuban but with a uniquely American touch, explains Johnson-Kossick. "Canned potato sticks are layered on top of the ham—a fusion of American and island tastes," she says.