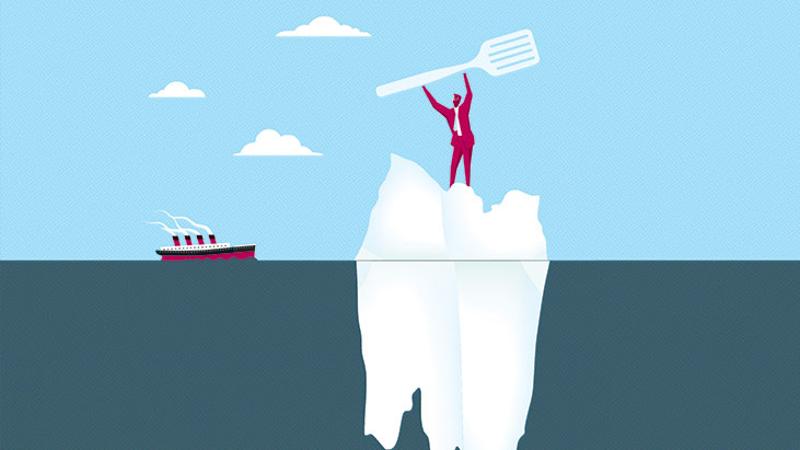 The hardest trends to spot are the ones that move at glacial speed but turn you into the Titanic if you miss them. And right now, there’s every reason to shout, “Iceberg, dead ahead!”

Recent developments attest to a slow-moving but fundamental shift in the way restaurants are run. Entrepreneurs and their innovations still push the industry forward, but there’s an undeniable professionalism coloring how the enterprises function as businesses. The artists in whites who hatched the operation are recruiting pros in suits to build an organization that’s as outstanding as the food or service.

A few days later, the Paul Martin’s restaurant group announced that oversight of the business would be shifted to a 30-year veteran of running restaurant companies, Brad Kaemmer, the group’s first-ever CEO. Paul Martin’s American Grill is a venture from concept creators Brian Bennett and Paul Fleming, the P.F. in P.F. Chang’s and the Fleming in the Fleming’s steakhouse chain. They’re turning over business matters now that the polished-casual upstart has opened its tenth store.

Sandwiched between those announcements was the appointment of a president for multiconcept Cameron Mitchell Restaurants, David Miller, who’ll be helping CEO and culinary school grad Cameron Mitchell manage the business.

That greater business sophistication also is evident in the operations of the 2016 Restaurant Leader of the Year, Greg Flynn of Flynn Restaurant Group. Flynn, one of the few franchisees ever selected for an industry honor of that stature, was chosen because he’s emblematic of the new, more professional restaurant licensee. His business is closing in on the $2-billion-in-annual-revenues mark, with coast-to-coast operations and a support center that employs 130 people. His is no mom-and-pop operation.

There’s even a hint of the industry’s MBA drift in the efforts by several big chains to recall the quainter days when their founders were still the ones running the show. KFC has brought back the Colonel three times in the last year, and Wendy’s is rechristening its burgers as Dave’s Single, Double and Triple, an homage to founder Dave Thomas.

What’s it mean for the industry? The business is growing up. Just look at the critical role technology plays in almost any operation today, or how essential real estate decisions have become. Having a killer idea for a concept no longer is enough to springboard a successful restaurant company, just as wizardry in the kitchen isn’t sufficient to forge a multiunit empire. Restaurants always had to be viable businesses, but the bar is being raised higher, at a head-turning speed.

Sadly, we may never again see the day when the CEO of a sizable restaurant company can trace his start to working the fry station at Unit No. 1. The real successes will be the innovators who enlist hard-nosed business people to nurture the organization while they work on the artier requirements for success.