Sure, employing drones in place of delivery drivers—still among the most dangerous jobs in America—may sound like a logical next step for foodservice in the Information Age. But despite a few publicity stunts, pizza companies have yet to petition the FAA. Still, everyday technology, such as cellphones, GPS and mobile apps, has been a boon for restaurants’ takeaway programs—and, equally important, may be contributing to safer deliveries. 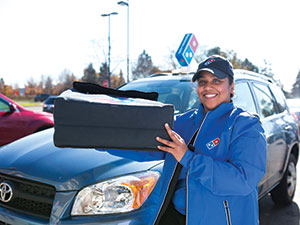 “Technology has certainly helped,” says Tim McIntyre, vice president of communications for Domino’s Pizza. “The best way for consumers to utilize an app is to fill in the information in advance and create a profile,” he says. Not only does it make ordering faster for the user, it gives the restaurant all the information it needs, including (most likely) a legitimate address.

“Technology [also] has reduced the cash part of our cash business,” McIntyre says. When customers pay for their orders within the app, it means drivers walk away from the delivery with a signed receipt in their pocket—not customers’ money, making them less of a target for would-be thieves. With almost 45 percent of Domino’s orders coming via digital platforms, “that kind of technology is really what’s making the most difference,” McIntyre says.

Moreover, the delivery segment is shrinking, and carryout is growing. “And we’ve been one of the beneficiaries of that,” McIntyre says. New prototypes with seating and open kitchens entice customers to come into the store. The app also reinforces carryout by storing past orders, making it easy for customers to place their order on the fly and pick up their pizza on their way home. Other tech initiatives, such as Domino’s Ford Sync function allowing easy, hands-free ordering from inside recent Ford-model vehicles, further push in-store pickups.

Even so, delivery drivers aren’t going away. Domino’s delivers more than 1 million pizzas a day—and
more this time of year when consumers hunker down at home to avoid the cold weather or settle in for a football game. And despite the precautions technology lends, new incidents of crime against food-delivery drivers are reported every day.

We asked Domino’s to share its best practices for avoiding delivery-driver robberies, and the company readily obliged, providing the four tips at right. “When it comes to driver safety, we don’t have any competition,” says McIntyre. “Because when somebody gets robbed or hurt, it’s a potential threat to everybody.”