The stars of the culinary world came out in force on Monday night, May 6, to attend the annual James Beard Awards ceremony and gala. Avery Fisher Hall at New York City’s Lincoln Center was filled with hundreds of top toques—many in the audience as nominees or presenters; others in their chefs’ coats cooking up tastes for the dine-around that follows the ceremony. 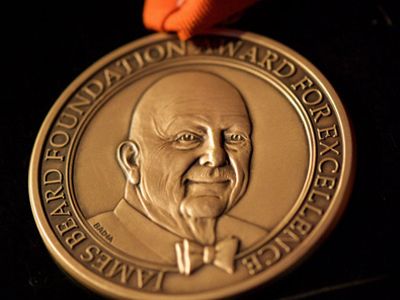 Emotions ran high as the winners took the stage, with raucous cheers accompanying the announcements and heartfelt tears the acceptance speeches. Predictably, many thanked their spouses, children and parents for the sacrifices they made to allow them to pursue their passion. But an equally loud shout-out went to industry peers and the winners’ staffs—the sous chefs, line cooks, servers, managers, expediters and all the behind-the-scenes people that drive a restaurant’s success. These humble acknowledgements were more prevalent than in years past.

A few other notable observations:

Patience pays off. There were several awardees who were nominated five, six or seven times and finally got their just rewards this year.

2013 is the year of the tie. The votes for one of the most prestigious awards—Outstanding Chef—resulted in a tie. Both Paul Kahan of Blackbird in Chicago and David Chang of Momofuku Noodle Bar in New York City shared the honor. Chang told Kahan he was always one of his heroes, and Kahan said “I can’t beat Chang, but a tie is okay.”

Here’s a complete list of all the James Beard Award winners announced at the May 6th gala:

Rising Star Chef of the Year
A chef age 30 or younger who displays an impressive talent and who is likely to have a significant impact on the industry in years to come. Danny Bowien
Mission Chinese Food
San Francisco and NYC