Among a seemingly endless list of food, beverage and hospitality jobs posted on Craigslist’s Denver site in early March, one stands out: “Lucky Pie LoDo Seeks Solid Human Beings.” The listing’s tone is clearly different from the other posts seeking the vague “server ... coffee knowledge” or just plain “experienced server.” Prospects who click through quickly understand that Lucky Pie Pizza and Taphouse is looking for more than just able bodies, it’s after people who will fit in with the trendy vibe at its Brooklyn-style pizza spot in Denver’s lower downtown historic district. It reads: “We think restaurants are one of the greatest inventions human beings have ever come up with, and we are passionate about people.” Hoping to weed out the misfits, the post asks applicants to answer a list of probing questions including, “What are you currently listening to on your playlist?” and  “What’s your favorite beer?” and “Describe kale,” in addition to the standard “How many hours a week are you interested in?”. All that’s missing is “Do you have a beard?” although candidates with facial hair who do their homework will consider Lucky Pie their nirvana, judging from photos of bearded hipster employees on its website. 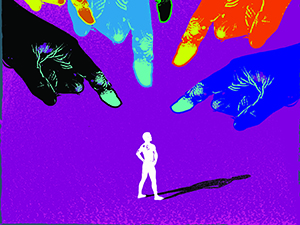 Job listings like these aren’t only about being clever and sounding fun, they may be the only way ads get noticed in an ever-growing, competitive restaurant market. The National Restaurant Association reports that job openings in the restaurants-and-accommodations sector rose to a six-year-high in January, according to figures from the Bureau of Labor Statistics. The 534,000 openings counted on the last day of January hit the highest level since December 2007.

With so many open positions and with big cities such as Denver boasting more than 200 new restaurant openings in 2013, according to the Denver Post, competition for top talent is only getting tougher.

The situation is similar in Washington, D.C. “The reality is the restaurant scene has grown exponentially in the last 10 years, way faster than the qualified labor force,” says David Moran, managing director of iconic Old Ebbitt Grill in D.C.

“A lot of the industry is blending,” he says. “Everyone is in the game now of ‘casual- fine dining,’ so I think a lot of the restaurateurs are looking for the same talent. We all want people to work for us who are passionate about the product they’re serving.”

Some positions are harder to staff than others, insiders say. In New York City and elsewhere, line cooks are in short supply, says Stephanie Berghoff, president and co-founder of Culintro, a group that hosts networking events and an online job board for restaurant professionals. “It’s really hard to fill entry-level positions. There’s a shortage out there,” she says, especially because many people who went to culinary school to be cooks aren’t willing to take a $35,000 salary at the end of the day.

“With management positions [particularly, general managers and assistant managers], you might get plenty of applicants,” but not necessarily as many qualified people, says Christine SanJuan, founder and president of CSJ People Solutions in Cumberland, R.I., which works with fast casual Boloco to provide general human resources and training. She suspects the cost of living in cities like D.C. is pushing good candidates out to the suburbs to live, and the commute becomes too prohibitive.

That shallow pool of talent has forced many operators, including Old Ebbit to be more aggressive in pursuing good people. “In the old days we would take out an ad in The Washington Post in the classifieds, but that’s neither economically worth it nor timely enough,” Moran says.

Moving the search online. Some operators, including Moran, say that Craigslist has become a go-to source for finding their best talent. When Old Ebbit was looking to bolster its frontline staff during the busy cherry-blossom season in the nation’s capitol, it put the call out on Craigslist. “We wound up getting over 50 replies in the first day,” Moran says. “That was really encouraging.”

Social media has worked particularly well for fast casual, SanJuan says, and it is a great tool for filling hourly positions. “Your hourly level is that millennial generation that’s very into social media,” she says. “So it is definitely a way you can try to talk about your brand to get some excitement and see if they’re interested.”

But she warns that social-media searches can be overwhelming. “If you’re looking for volume, it generates volume. [But] you get inundated with a lot of applicants who are nowhere near qualified, no matter how you position the job description.” And she worries about how all those unanswered applications are perceived. “It was ingrained in me early on at Boloco, that a potential applicant is a potential guest and needs to be treated as such.”

SanJuan also had success working with an independent recruiter to fill a GM position. “They charged a chunk of change, but they did a lot of front-end work to [understand] not just the job description but the company profile,” she says. “And they did a lot of work before they even presented [candidates] to the brand.”

Striking the right tone. Painting a clear picture of the kind of position and concept you’re hiring for goes a long way toward attracting appropriate candidates.

Despite the challenges of outreach, SanJuan says she did see interest from people who already knew about Boloco and were excited to get in on the ground floor of an up-and-coming fast casual. “That’s a risk that brings appeal—to be part of the growth in the beginning,” she says.

In the job description, it’s important to be true to the brand. As cleverly worded as Lucky Pie’s posting was, it would not fit the vibe at, say, Old Ebbitt—a flagship historic restaurant. Even on Craigslist, “our [wording] is pretty traditional,” Moran says.  “You have the ability to certainly represent yourself. If you’re running a cool hipster joint, you can tailor your language to that.”

The goal is matching the right employee to the right establishment, he says. “When it’s the right match, it’s a good thing for both parties.”

Stepped-up screening. No matter how they find applicants, both Boloco and Old Ebbitt Grill have made the process of screening candidates more intensive. “Ten years ago, we would interview everybody who applied,” says Moran. “Now we’re being smarter about how we’re using our time.”

One of the things Old Ebbitt and its sister restaurants in the Clyde’s Restaurant Group  have done recently that’s improved hiring is putting everyone through a series of two or three interviews with different managers. “We’ve seen that it’s really improved our retention and the quality of the hires,” he says.

It has improved managers’ interviewing skills too, Moran observes. “Afterwards we’re sharing how our interviews went. I know I’ve picked up some tips from some of my younger managers, and I’m pretty sure they’ve picked up some from me about what questions I’m asking.”

At Boloco, the recruiting process for managers can take four to six weeks, and may involve a phone interview, an in-person interview and panel interview with a couple of GMs or trainers; then prospects would come in and meet with some of the executives. SanJuan believes that whenever possible, it’s important for managerial candidates to meet with the CEO; even when it’s difficult, there are ways for that CEO to be involved. “Selecting great talent is still the No. 1 way to be successful in business.”

Always be hiring. Operators agree that the hiring process extends beyond filling a specific position. “Our real theme is never stop hiring,” says Moran. “You should always be looking for good people.”

Every day, Old Ebbitt Grill still gets people coming to the door and calling up to inquire about jobs. Even when there are no open positions, Moran’s team always looks at finding a place for someone really talented and really good. “If anything, it sharpens the skill set on those who are there already; they see qualified people coming in and think, ‘I’d better be on my game.’

The mixers Culintro hosts in New York City and San Francisco, have a similar mission—to connect chefs and sous chefs and get them interacting outside of the kitchen.  “There’s no science to finding the best applicants,” Berghoff says. Its about coming up with creative ways to meet people, whether it’s at an industry event, on social media or at the door of your restaurant.

Attracting great candidates isn’t just about salary and benefits. The job title also is important—and a creative one can be valuable for setting the mindset of the employee and the customer. “I do think those [titles] are appealing to people,”  says Moran. “And I wouldn’t be surprised to see more of that in an industry that is really about personality.” Here are a few notable ones:

Voice of the consumer, Chick-fil-A: Monitors brand and total business performance  in the eyes of the customer; provides customer insights that support innovation and R&D.

Guest experience captain, Buffalo Wild Wings: A new kind of server, emphasizing the chain’s focus on games; this part-timer helps guests find a game they want to watch on TV or learn how to play an electronic trivia game.

Chief Burger Officer, Red Robin: Not a real position at the company; a previous marketing campaign to find burger-loving fans.