Peanut butter and banana sandwiches? A marshmallow-cramming contest? A dress code of shorts and flip-flops? This is an industry conference? 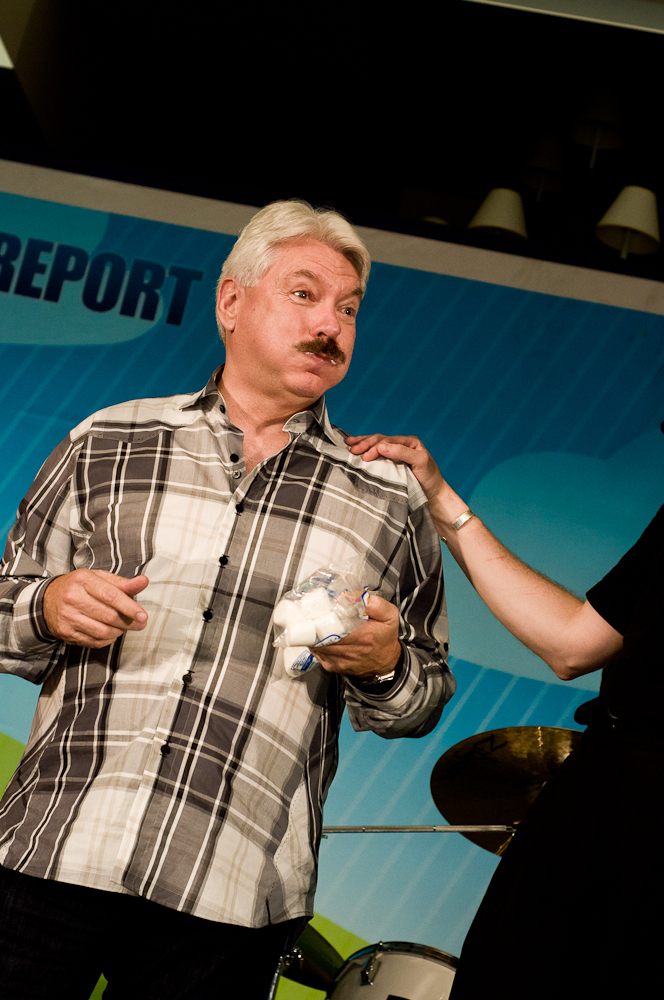 Most definitely, dude. And don’t even ask about the references to alligator insemination and hash.

Welcome to People Report’s Summer Camp, a get-together that brought together more than 200 restaurant executives characterized by one speaker as refugees from the Island of Misfit Toys. “You people are broken,” declared Jim Knight, senior director of training and development for Hard Rock International. His assessment brought uproarious applause and untold appreciative tweets.

Somber heads—deliciously rare at Summer Camp—might’ve described it as a confab of senior leaders from chains’ human resources and marketing departments. The stated purpose of the conference was bringing those disciplines together without any splash fights or timeouts.

As speaker after speaker stressed, the common ground for those often unintentionally silo’d departments is social media. At Taco Bell, for instance, “we’re at a demographic where our consumer and our employee are the same,” said Avery Block, whose official title at the chain is social engagement & brand champion.

Like others, Taco Bell is trying to align what it says to consumers via Facebook and Twitter with how it communicates through those channels to team members and potential hires. Done correctly, the employees can become brand ambassadors, or walking, talking extensions of the marketing department at a peer-to-peer level.

“I want people to have that 30-second elevator speech on what it means to work for Taco Bell, what my Taco bell means,” Block explained.

Getting there isn’t easy, she acknowledged. Taco Bell spent three months working on a social media policy for the whole organization, from the executive floor down to break rooms. Among the challenges was countering the tendency to pack employment policies with “no’s” and “don’t’s.”

There’s also the sheer inertia, suggested one of the collaborators on the policy, Yum! senior director of global diversity and inclusion James Fripp (also the drummer in the Summer Camp band.) He noted that it’s standard operating procedure for chains to prohibit customers and employees from shooting pictures or videos in dining rooms.

But “that’s how people live today,” said Fripp. “Are we limiting our talent by telling people they can’t do that?” To persons of a tender vintage, it’s senselessly prohibiting a routine function.

Summer Camp was set up to avert what host Joni Doolin has termed Death by PowerPoint. Speakers gave their presentations largely in the form of first-person stories, including several where a painful lesson was candidly recounted.

One of the more discussed sessions was The Leadership Hour, where three high-level executives recounted how they got to where they are and what they learned along the way. These clearly weren’t presentations prepared by their respective employer’s communications department. Kelli Velade, COO of Chili’s, spoke candidly about how she worked to temper an outward demeanor that masked the empathy and warmth she actually felt for teammates.

Jim Knight noted that he’d worked for a time at an alligator farm, where his duties included overseeing the insemination of the livestock. Mercifully, he didn’t provide details. But he did joke that he didn’t have hash like a fellow Leadership Hour participant reportedly did. It was pointed out to him that the fellow panelist had a hash tag.

The conference opened with a S’mores reception, and was followed the next night by a “Glee”-style talent contest. One of the tensest moments was a duel to see which of two participants could shove the most marshmallows into their mouth and still utter a nonsense phrase.

Co-host and Black Box Intelligence CEO Wally Doolin finished second with what was estimated at about nine marshmallows.