Group housing
In 2007, John Kregel, a pig farmer in Garnerville, Iowa, built group housing—also known as large pens—to accommodate 3,000 of his 9,000 sows; the other 6,000 remain in gestation stalls. All are the same breed of Newshen pigs. “We saw what was happening in Europe with the animal welfare movement, so we converted to stay ahead of the curve,” Kregel says. “The public perceives this as a more humane practice.” He feels the stalls are better for the pigs in winter but his sows are adapting well to the pens. 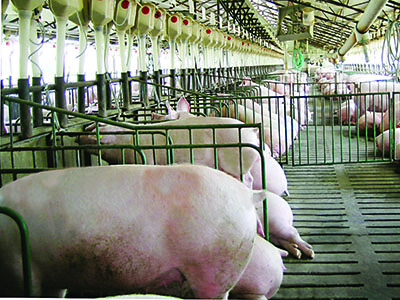 Gestation stalls
Chris Chinn and her husband raise 1,500 sows in gestation stalls on their farm in Missouri. “Animal welfare is a top priority,” she noted on the panel “The Food Dialogues: A Look Behind the Menu at Where Food Comes From,” during the 2013 Restaurant Leadership Conference. “We raise the pigs inside to keep them safe from predators and bad weather, [it’s] easier to monitor and [they are] more accustomed to human interaction. As a result, they have less stress.”

Pasture or free range
Pastured chickens eat about 20 percent of their diet from grass, bugs, weeds and seeds that they forage in fresh pasture, supplemented by 80 percent corn-soybean feed. Free-range chickens may be pasture-raised but that’s not always the case. USDA standards allow any poultry with access to the outside—even a small slab of concrete for just a few hours per day—to be labeled free range. The remaining time, they are kept in chicken houses. Before paying more for free-range chickens, make sure the supplier is following the stricter standards of pastured production.

Grass fed
According to the Cattlemen’s Beef Association, all cattle spend most of their lives grazing on pasture until they grow large enough for finishing. At about 12 to 16 months of age, the weaned calves are either sent to a feedlot to be finished on grain for four months and harvested, or they continue to graze and are marketed as grass-fed beef. Scott Stone raises 700 head of cattle for both markets at his family-owned Yolo Land and Cattle Company in California’s Sacramento Valley.

Feedlot
Producers who finish calves in feedlots have the option of using growth-promoting hormones. Tom Fanning operates a feedlot in northwestern Oklahoma, finishing up to 28,000 cattle at any one time on 700 acres. Fourteen employees look after the cows.