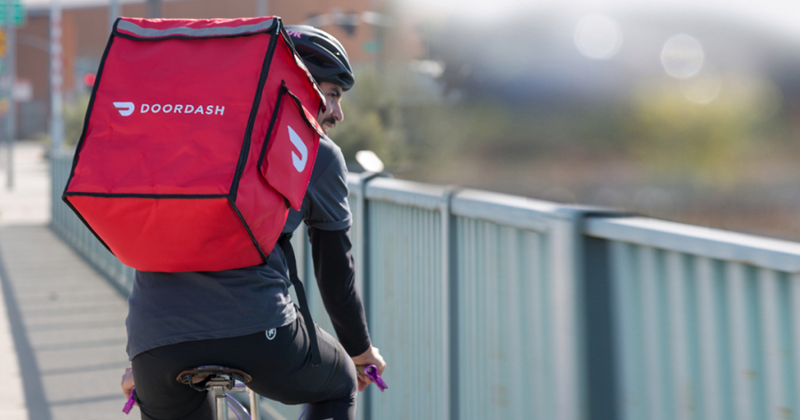 DoorDash released filing documents for its long-awaited IPO on Friday, giving the public a glimpse into its inner workings as it looks to drum up $100 million from investors. Here are six takeaways from the filing.

In a little under three years, DoorDash has gone from one of the smaller delivery players in the U.S. to the largest. In January 2018, it accounted for 17% of delivery sales, according to the filing. By October 2020, DoorDash claimed 50% of those sales.

Total orders also grew steadily each quarter since the start of 2019—and, not surprisingly, have skyrocketed since the pandemic began. But a look at its pre-pandemic growth is probably a better illustration of the trajectory it was on. The company fulfilled 50 million orders in Q1 2019; a year later, that number was 103 million, an increase of more than 100%.

DoorDash acknowledged the unprecedented effects the pandemic has had on its business, and cautioned that the massive growth would probably not continue.

“We expect the growth rates in revenue, total orders, and Marketplace GOV (gross order volume) to decline in future periods,” it said.

DoorDash has lost money every year since its founding in 2013, the filing said. That’s not unusual among third-party delivery companies, which have historically struggled to turn a profit in the challenging three-sided marketplace of consumers, restaurants and drivers.

In the nine months ending Sept. 30, 2020, DoorDash generated a net loss of $149 million on revenues of $1.9 billion. It lost far more ($532 million) in the year-ago period, on lower revenues ($587 million). Higher order volumes during the pandemic have made its service more efficient, but the company doesn’t think those volumes will continue.

In its filing, DoorDash warned it would likely continue to lose money as it invests in growth.

“We expect our costs will increase over time and our losses to continue as we expect to invest significant additional funds towards growing our business and operating as a public company,” the company said.

DoorDash sees a huge consumer market for its services, and has spent a lot of money driving people to its platform and getting them to continue using it.

The 18 million people on its platform as of September represent just 6% of the total U.S. population, the company said, and it’s aggressively pursuing the rest of that pie.

“We use the vast majority of our sales and marketing and promotions spend to bring new consumers to DoorDash and to encourage their repeat use of our platform,” it said. In the nine months ended Sept. 30, it spent $610 million on sales and marketing—about a third of its revenue over that time.

In addition to its 50% overall market share, DoorDash is capturing 58% of sales in suburban markets. It has chosen to focus on suburbs and smaller cities from the beginning, and those markets remain key to its growth plans.

“We believe that suburban markets and smaller metropolitan areas have experienced significantly higher growth compared to larger metropolitan markets because these smaller markets have been historically underserved by merchants and platforms that enable on-demand delivery,” it said in the filing.

Also, families tend to live in the suburbs, and families place larger orders that are more cost-effective for DoorDash. Less traffic and easier parking also makes them more efficient areas for drivers. Not to mention the suburbs are primed for growth as the pandemic has made them more enticing.

DoorDash and other gig companies scored a win on Election Day when voters in California passed a measure that will allow the companies to continue treating drivers as independent contractors rather than full-time employees.

But that measure, Proposition 22, still requires DoorDash to provide additional compensation and benefits to drivers, resulting in higher costs that it may have to pass along to restaurants or consumers, it said.

And the company warned that there’s still a chance it could be forced to reclassify its drivers under state or federal law.

“We could face further challenges to the classification of Dashers that utilize our platform as independent contractors as other states where we operate are considering adopting similar legislation or regulations,” it said.

DoorDash plans to expand its services beyond restaurant delivery, offering things like analytics, merchandising and payment processing for all kinds of businesses.

A key pillar of this plan appears to be its DashPass membership program. DashPass users pay $9.99 per month for unlimited free delivery.

Those members (and there are 5 million of them) have mostly used it to order from restaurants, but DoorDash sees the program becoming “a wallet for the physical world” that people can use at other local businesses—something along the lines of Apple Pay, perhaps.

Expanding beyond restaurants and delivery into the broader realm of e-commerce could allow DoorDash to reach more users and businesses and diversify its business model.