Launched in late 2011, the free Chefs Feed app for iPhone and iPad has quickly become a favorite with chefs and their fans, registering more than 100,000 users in less than a year. Chefs Feed is a dish guide, not a restaurant guide—chefs wax poetic about their favorite menu items found at restaurants in featured locales. Version 2, released this past October, looks to up the culinary experience even further, branching out to seven additional cities—six in the U.S. and across the Atlantic to London, for a total of 16 destinations. A new social media feature allows users to follow one another, as well as contributing chefs, with the intent of creating an online community where the common thread is finding good food. 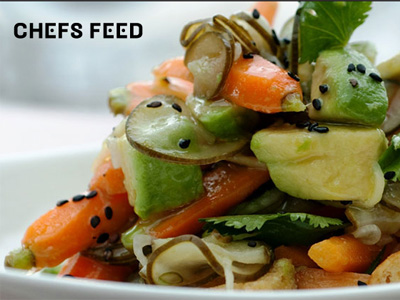 The Rivera brothers have yet to monetize the app, looking first to build “critical mass” before they accept sponsorships, explains Jared Rivera, who co-developed Chefs Feed with his brother Steve. “We look for a very focused audience,” he says. Chefs Feed doesn’t allow just anyone to add content—only the contributing chefs are allowed that privilege, and each of the contributing chefs has been recommended by a regional editor and/or personally vetted by Jared or Steve Rivera.

The app limits the number of contributing chefs, to maintain the “quality and integrity of the app,” says Jared.  “We are very discriminating; we don’t want to dilute the quality.”

The original version of Chefs Feed offered no tangible benefits’ for contributing chefs to participate, “we just went full steam ahead with a good—and overdue—idea, and the chefs started gravitating towards it,” says Steve.

“Our contributing chefs' profiles have become a form of expressing who they are through the food they like to eat, and they're constantly emailing/texting me at all hours asking things such as ‘can you please add the Lengua Tacos from Taqueria Vallarta to my profile?’ I get that text at 3:00 a.m. and then I dream about tacos for the rest of the morning,” adds Steve.

The new version lets chefs add dishes “on the fly,” directly from their smartphone, and also communicate whatever they find relevant in their culinary world, to other chefs or to consumers.  “That could be a verbal that they'll be running at their restaurant when service begins in an hour, or it could be something that they found at the market that they're going to be introducing with their new Spring menu,” explains Jared. “If used correctly, it should be a very valuable social marketing tool, because we're granting chefs access to our audience of over 100,000 people who are interested in hearing info straight from the chefs.”

Version 2 also lets all users create profiles to track and share dishes they’ve eaten, and build an itinerary for dishes they plan to eat. Users can follow friends and share their personal profiles with the friends that they follow, and search to see if their Facebook and Twitter friends are using Chefs Feed.

“Our ultimate goal,” says Jared, “is to bring people around a table together because of Chefs Feed.”

Food Community
The new Food Community app from Nommunity.com is designed to help consumers to find restaurants that cater to people with the six most common food preferences: gluten-free, organic, locally grown, kosher, vegan and vegetarian.

The free iPhone/iPad app is part of a new online community—Nommunity.com—created to encourage restaurants to offer healthier options, while educating readers about their food choices. Participants are able to share recipes, food stories and tips with like-minded people, as well as make reservations, place delivery and take-out orders, and even claim coupons for restaurants.

“Nommunity’s Food Community app covers the United States, so you can search for information on restaurants and retailers specializing in specific kinds of foods by simply enabling the ‘current location’ feature on your iPhone—so whether I’m at home in Dallas, on business in San Francisco or New York, or visiting friends in Tucson or Mobile, the app will show me the closest resources that match my needs,” says Zachary Wiles, CTO, Nommunity.com.

The amount of restaurants varies by location, says Wiles. “For example, you might find more kosher restaurants in New York than in Mobile, “ he explains. “But if it’s there, we’ll find it.  And if it’s new, and we don’t have it, you can easily let other community members know.  Or, if the restaurant has closed, or you have feedback about it, you can easily offer that feedback to the community, too.

A restaurant becomes part of the Food Community by providing information online that lets the site’s filtered search system find. “The community influences results by adding details, reporting problems, or telling us about a resource we didn’t find using a technological means,” says Wiles. “For instance, let’s say there is a family-run restaurant that has no online presence—they’d become part of our search database when a member shares information about them.”

Dish Tip
While not an app, dishtip.com is worth a mention, if for no other reason than to see how your restaurant and menu items are rated in cyberspace. Mining data from the web using the TipSense platform, dishtip.com lets users plug in a city, type of dish and cuisine, price point and type of establishment to come up with the best menu items—and venues that serve them—that meet the user’s criteria, displaying also its rating. Establishment types are sorted as restaurants, food services and table service. With the criteria as best dishes in Huntington, NY, for example, the site shows Shrimp and Grits from Swallow as being in the top 10%, complied from web mentions.

The site also has a tab for “The top 100 dishes across the USA,” allowing users to plug in the same parameters to find the ultimate chocolate chip cookie (Levain Bakery in New York) or strawberry croissants (Cream Pan in Tustin, California).