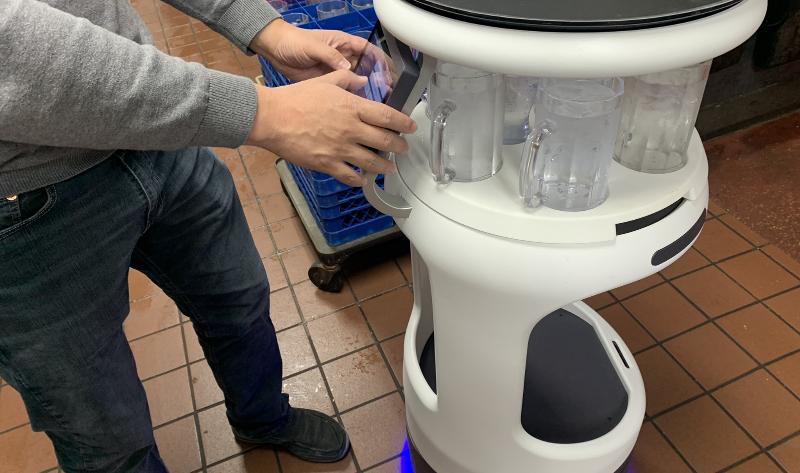 Rita can be programmed to perform a number of tasks using an iPhone-like interface. / Photograph courtesy of Chili's

Rita the robot can do a lot. She can help seat guests, bus tables and serve food. She can even sing “Happy Birthday.”

The question for Chili’s was, would her human co-workers actually use her?

After an 18-month test at 10 restaurants, the answer turned out to be yes. The bots’ “utilization rate” increased significantly over time, which indicated that employees saw value in the machine, said Wade Allen, SVP of innovation for Chili’s parent Brinker International.

That has led the chain to start rolling Rita into 51 additional locations in eight states over the next month. It’s possibly the largest test of such a robot by a U.S. restaurant chain, and is part of an overall increase in automation in the industry. Front-of-house robots like Rita have been perhaps the most visible examples of that adoption, with restaurants of all sizes starting to deploy them in an effort to support what are in many cases smaller staffs.

At Chili’s, the goal was to make workers’ jobs easier while also improving the guest experience, Allen said. Rita—named after the chain’s signature margaritas—is manufactured by Bear Robotics and has four main functions, as mentioned above. Chili’s staff can decide how they want to deploy her at any given time.

“In a world where hot and fast is as important to guests now than ever … what she does is she just really helps our team members to provide a better experience,” Allen said.

Rita can most often be found guiding Chili’s customers to their table, which allows the human host to stay at the front helping guests. She’s also frequently called on to run food, especially to large parties that require multiple trays, Allen said.

Employee feedback about the bot has been “overwhelmingly positive.”

“I think that at first, with any technology, they’re a little bit hesitant,” Allen said. “But what we’ve been told is she’s super simple to use.”

She’s also eased some of the physical burden of front-of-house work. Some workers have expressed “how much it saves their legs and how much more comfortable they now feel” not having to travel back and forth as often with heavy dishes, Allen said.

Their only complaint, he said, is that she can move a bit slow. But Chili’s is reluctant to speed her up: They don’t want her to accidentally spill something.

A slip-up like that would be unusual for the bot, which rarely makes mistakes. In fact, Rita has performed her tasks with more than 99% accuracy during her tenure at Chili’s. The most common problem is that a misplaced bag or chair can confuse the bot and cause her to return home mid-task, which Allen said happens about once a week.

He emphasized that Rita was never intended to replace human workers, noting that the vast majority of Chili’s locations have returned to pre-pandemic staffing levels.

“This is just like Presto on our tables today, or just like the iPads when you take an order at the table,” he said of Rita (Presto is the chain's tabletop ordering system.) “It’s about giving them a tool” to help do their jobs better.

Meanwhile, guests seem to like Rita, too. In addition to helping out around the restaurant, she dishes out a little attitude with a repertoire of jokes and snarky comments.

“It’s a fun element of coming back to a restaurant,” Allen said. “People enjoy that and they laugh about it and they don’t take it too seriously.”

The chain has worked to integrate Rita into its restaurants, starting with the margarita-inspired name and lively personality. It’s also weighing whether to update her look.

“We’re still deciding, is it a clean white, is it a red with some pizazz to it, what really does it come around to be?” Allen said.

Beyond greater satisfaction among workers and guests, Allen said it’s too early to say what kind of impact Rita might be having in other areas, like table turns, for instance. But with more bots starting soon, the chain should be able to get a better feel for other impacts, he said.

As for how Chili’s decided where to deploy the latest wave of Ritas, Allen said it’s a bit of a “secret sauce.” In some cases, the chain had identified restaurants where it thought the bots would be a hit with guests. Other sites were those struggling with staff turnover or guest sentiment, and Rita was seen as a way to improve it.

The rollout to the 51 additional restaurants is expected to be done by mid-May, the company said.