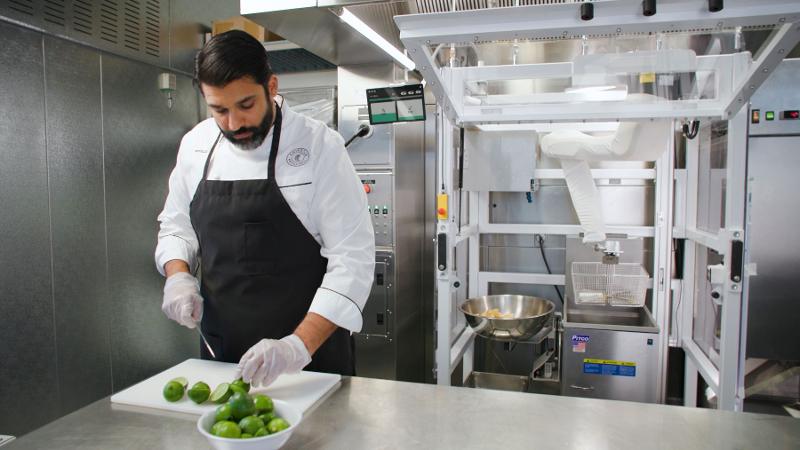 The robotic arm, which replicates Chipotle’s chip-cooking process, is a partnership with restaurant robotics company Miso Robotics. That’s the firm behind burger-flipping robot Flippy, as well as Sippy, a robotic beverage dispenser and sealer.

“Everyone loves finding a chip with a little more salt or an extra hint of lime,” Chipotle VP of Culinary Nevielle Panthaky said in a statement. “To ensure we didn’t lose the humanity behind our culinary experience, we trained Chippy extensively to ensure the output mirrored our current product, delivering some subtle variations in flavor that our guests expect.”

The robot is currently being tested at Chipotle’s Cultivate Center innovation lab in Irvine, Calif., but is slated to be “integrated into a Chipotle restaurant” in Southern California later this year, Chipotle said. The chain is evaluating Chippy’s performance using its “stage-gate process” to listen, test and learn from worker and customer feedback before deciding whether the robot has earned a spot in restaurants nationwide.

“When Chipotle challenged us to see if our technology could meet the brand’s high standards for culinary quality, we couldn’t wait to flex our engineering and design muscles,” Miso Robotics CEO Mike Bell said in a statement. “This partnership will allow us to move into new territory to help improve back-of-house functions and assist team members with their day-to-day responsibilities.”

Chippy the bot in action

Chipotle has long been innovative in its use of technology, becoming the first major chain to deploy order-ahead functionality at the drive-thru through its much-copied Chipotlanes.

Last month, White Castle said it would install Flippy in 100 of its restaurants, following an earlier rollout in 11 stores.

Miso used feedback from White Castle to develop Flippy 2, which has more functionality, including the ability to fill and empty a fry basket.

Restaurants around the country are eyeing robotics as a possible balm for ongoing labor shortages. Chipotle said the robot could help it redeploy workers into other areas.

“We are always exploring opportunities to enhance our employee and guest experience,” Chief Technology Officer Curt Garner said in a statement. “Our goal is to drive efficiencies through collaborative robotics that will enable Chipotle’s crew members to focus on other tasks in the restaurant.”