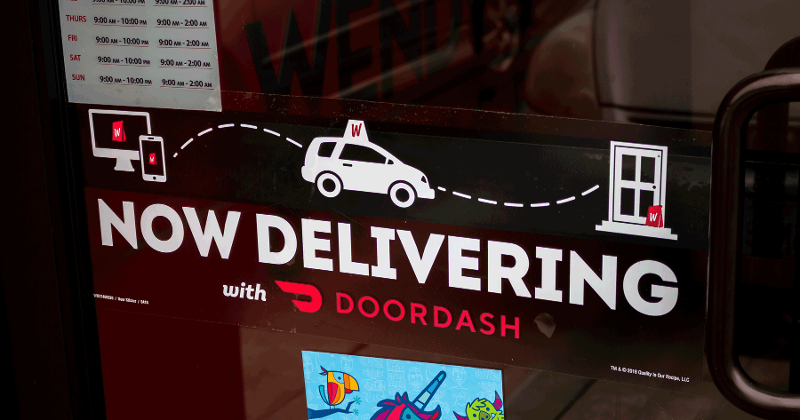 Third-party delivery company DoorDash made a soaring debut on the public market Wednesday, with share prices increasing by as much as 80% in morning trading, underscoring investor confidence in the future of the on-demand delivery business.

Shares opened at $183 and got as high as $195 before closing at more than $188, an increase of more than 80% from the final price of $102 on Tuesday night, which itself represented a big leap from the company’s initial range of $75 to $85. DoorDash raised $3.4 billion on 33 million shares with the initial public offering Tuesday, valuing the company at more than $38 billion.

The numbers indicate intense demand from investors who are bullish on the company’s prospects amid a year of massive growth for DoorDash and delivery in general. DoorDash’s revenue in the nine months ended Sept. 30 was nearly $2 billion, up from $587 million a year ago, and the company made a profit in the second quarter. It has been unprofitable every year since it was founded in 2013.

There is skepticism about the company’s ability to continue its recent growth post-pandemic. In a survey of 59 investors, Wall Street researcher Bernstein found that most thought DoorDash’s growth would decelerate in 2021.

“Most anticipate growth in the 10% to 25% range, though some do anticipate another year of high double-digit growth (50% to 100%), while others think volumes could be flat-to-down in 2021,” the researcher said.

In a prospectus filed with the Securities and Exchange Commission, DoorDash itself said it expects growth rates to decline.

DoorDash is the largest third-party food delivery company in the U.S., accounting for more than 50% of sales in October. It reported a global network of more than 390,000 restaurants, 18 million consumers and 1 million drivers.