The burgeoning world of mobile has been on a slow collision course with the restaurant industry. But it may be time to speed things up. The National Restaurant Association’s 2012 Restaurant Industry Forecast found that a third of consumers would use mobile payments if offered. 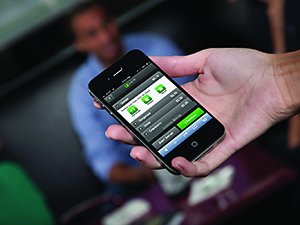 Some operators are seeing this first-hand. They already have joined up with services such as Tabbedout, Square Wallet, LevelUp and NCR’s Mobile Pay that turn payment control over to the diner’s own phone. Choosing a provider is a matter of finding a technology you are comfortable with and that works with your current systems. We asked operators to tell us what influenced their decisions.

Doug Ferriman, CEO of Crazy Dough’s Pizza, a Boston-based 7-unit fast-casual pizza chain, stumbled across LevelUp at a local pub a little over a year ago when he saw a woman paying her tab with her phone. “I thought it was very innovative and futuristic in terms of payment,” he says.

For diners, using LevelUp (accepted at more than 5,000 businesses) is as simple as downloading an app for iOS or Android, linking a debit or credit card to it, and scanning a QR code generated on the phone with a reader device at the restaurant to pay. The cashier types in the amount, the transaction is done and the customer instantly gets an email receipt. Users also can preset tip amounts to automatically add a gratuity.

It wasn’t just the forward-looking payment system that sold Ferriman, it was the integrated customer rewards program. One successful promotion offered a free slice of pizza to people  who paid with LevelUp. “We tracked 50 new customers that day,” says Melissa Ferriman, director of sales and marketing.

LevelUp charges merchants a 2 percent payment processing fee. Loyalty campaigns run using the system have a 25 percent pay-for-performance fee that kicks in only when offers are redeemed.

For Jay Kazlow, vice president of operations at Dantanna’s upscale sports restaurants in Atlanta, the choice to adopt a mobile payment system stemmed from concern about credit card safety. Paying at the table means the cards never leave the owner’s grasp.

Finding a system that integrated with the restaurant’s existing NCR Aloha POS was a top priority for Kazlow. When he learned about the new Mobile Pay option built for Aloha, he jumped at the chance to be an early adopter.

Besides settling the bill, Mobile Pay users (who pay via credit card or PayPal) can reorder items, alert a server and provide feedback. Restaurant operators pay a monthly fee for the service.

Kazlow says he’s seeing slow but steady adoption among customers. “It’s nothing compared to the amount of people who throw down plastic every day, but it’s more than I thought,” he says. He expects the numbers to grow as diners get familiar with the option. “One of the biggest complaints is not being able to get your check. This takes that away. You get your check immediately,” says Kazlow.

Famous Five Dining operates five Famous Dave’s barbecue restaurants in Tennessee. There, diners can pay with their phones by downloading the Tabbedout app. Tabbedout integrates with Famous Five’s Micros POS, which made it easy to get started and train employees. “The challenging part has been getting our customers aware of it and convinced that it’s worth trying,” says Chief Financial Officer Laurel Renegar. “If I didn’t think this is where we are headed, I wouldn’t have invested the time and energy into it.” Renegar’s company is trying the system though a test-drive with Tabbedout.

They all are onto an idea that is gaining momentum. Says Ferriman, “It’s not just a fad or trend. It’s going to become a societal pattern, especially for the younger generation that is coming up now.”