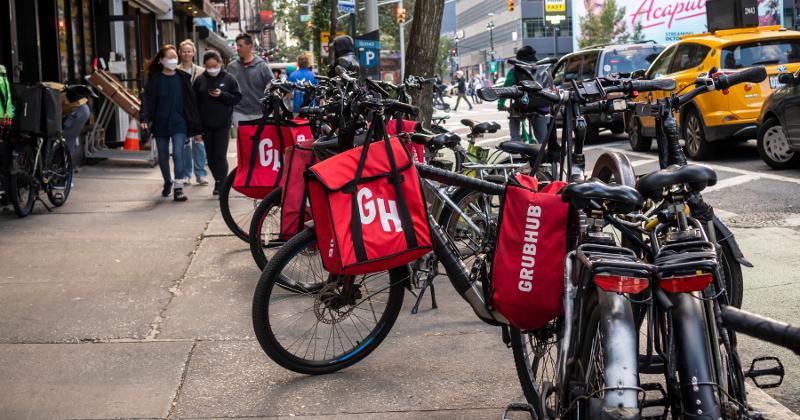 Grubhub's expansion push in 2018 led to problems and prompted a lawsuit from investors. / Photograph: Shutterstock

Third-party delivery provider Grubhub agreed to pay $42 million to settle a proposed class-action lawsuit that claimed the company misled investors about its performance.

The suit, filed in 2019 in U.S. District Court in Illinois, is related to a pivotal expansion push made by Grubhub in 2018 as it raced to keep up with competitors. The investors allege that the strategy shift hurt order volumes but that the company tried to conceal the problem, artificially boosting its stock price.

Grubhub denied the allegations, but a judge in 2021 struck down its motion to dismiss the suit. According to a motion filed Oct. 7, the two parties began a mediation process in April and ultimately agreed to settle, citing in part the high costs associated with dragging out the fight.

“We are satisfied that we reached a settlement to put this matter to rest,” Grubhub said in an emailed statement.

According to the initial complaint:

Grubhub in 2018 started moving into more than 200 new markets because it was losing share of existing turf. At the time, there was a key difference between Grubhub’s business model and that of the companies it was chasing: Grubhub formed an agreement with each restaurant on its marketplace, while fellow providers like DoorDash and Uber Eats added restaurants without formal consent. This allowed them to quickly build up their restaurant selection.

As Grubhub entered new markets, it struggled to add enough restaurants to attract quality customers. So in early 2019, it began adding restaurants without agreements, refinancing debt to help fund the new approach.

All the while, the company told investors the expansion was going well and blamed declining metrics on outside factors like the timing of holidays.

But after two consecutive quarters of slowing order growth, the company revealed on Oct. 28, 2019, that customers in new markets were ordering less frequently. It also disclosed for the first time that it had been adding non-partner restaurants to the platform. Its stock price fell 43%, to $33 from $58.

The class proposed by the plaintiffs would include all purchasers of Grubhub common stock from April 25, 2019, to Oct. 28, 2019.

The settlement is the latest lowlight in what has been a difficult five years for the company.

Founded in 2004 in Chicago as an online marketplace for local restaurants, Grubhub went public in 2014. By 2018, its stock was trading at an all-time high of around $120 per share.

But it was also feeling pressure from logistics companies like Uber Eats, Postmates and DoorDash, which had sophisticated delivery technology and wider selection. By 2019, DoorDash had edged out Grubhub as the U.S. market share leader. Grubhub continued to lose ground during the pandemic in part because of its presence in large cities rather than suburbs, where delivery exploded.

As of this past May, Grubhub accounted for 13% of all U.S. delivery sales, according to data from Bloomberg Second Measure. DoorDash made up 59% and Uber Eats/Postmates stood at 27%.

Last year, Grubhub was acquired by Amsterdam-based Just Eat Takeaway (JET) for $7.3 billion. But its value has taken a hit as orders have declined and sales have stagnated, and JET has been looking at selling the company.

UPDATE: This story has been updated to include a statement from Grubhub.