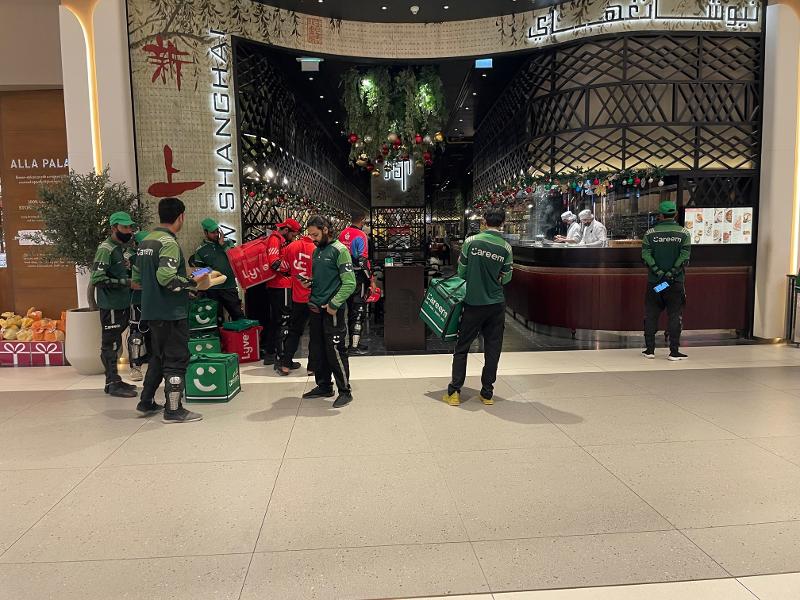 Delivery drivers wait outside a restaurant in the Dubai Mall. Technology plays a substantial role in international operations. / Photo by Jonathan Maze.

Korhan Kurdoglu, the CEO of Turkey-based TAB Food Investments, or TFI, minces no words about the importance of technology in his business. “You can’t live without it,” he said at the Global Restaurant Leadership Conference in Dubai this week. “It’s a must have.”

Of course, he would say this. TFI operates Burger King restaurants in China, where consumers no longer use cash. One cannot exactly operate a cashless business without some technological assistance.

But the comment in many respects reflects the sheer importance of technology to the operation of restaurants outside the U.S. For as much as domestic operators are playing a game of one-upmanship with things like digital loyalty programs and artificial intelligence, such ideas are a necessity elsewhere in the world.

Several brand operators who spoke at the conference described themselves as digital-first organizations. Fyodor Ovchinnikov, the founder and CEO of the Russian pizza chain Dodo Pizza, said his company was as much an IT company as it was a pizza provider.

Outside the conference, evidence of the importance of technology was everywhere, particularly the ever-present supply of bikes operated by one of a handful of third-party aggregators in the country.

To be sure, there are some limitations. The aggregators in Dubai are difficult to work with and the companies themselves are not profitable—Zomato, one such aggregator, was shut down this week in the UAE, for instance. There are also limits to what operators in some countries can do, such as with customer relationship management (CRM) programs that take customer data for marketing purposes.

But this shift in the use of technology has been swift and important. “We saw a very strong evolution in industry technology,” said Alessandro Preda, CEO of the European operator QSRP. Sixty percent of his company’s sales now come through digital channels, including delivery, kiosks, web and mobile ordering. The company has 7 million “registered customers” and 1.5 terabytes of data on them.

He also noted that the company is working on CRM to target customers using that data, though Preda acknowledged limitations in the European market, where the government limits such use. But Preda also said his company was working in another area: crowdsourcing, to develop products and offers based on what customers want.

His company built its own point-of-sale system in Turkey and has been able to use that in China, too. It also built technology to help with its supply chain, a key benefit given consistent supply chain issues since the pandemic.

Kurdoglu also believes that artificial intelligence will be the next big thing, though much of that innovation will come out of China. “Today, 50% of A.I. innovation is coming from China,” he said.

That, he believes, will play a major role in restaurant operations in the future. “Decisions will have to come from machine learning,” Kurdoglu said.