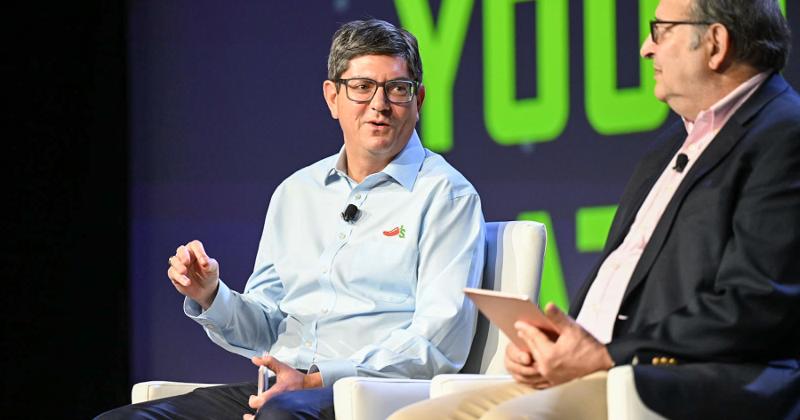 When it comes to technology, Kevin Hochman wants Brinker International to play by the 80/20 rule.

That means 80% of its attention will be on tools that can help the business in the near-term and the rest on things that might make an impact years from now.

The company, which owns Chili’s and Maggiano’s, is putting an emphasis on what Hochman called “practical tech,” like computer tablets and new grills. A test of robots that can seat guests, on the other hand, has been put on hold, and Hochman downplayed other splashy innovations like drone delivery and in-car ordering.

“We’re always gonna be about what’s next in the industry,” he said during the FSTEC conference in Dallas on Wednesday, “but not what’s five years from now.”

The back-to-basics approach comes as Chili’s grapples with some real business challenges. Sales in its most recent quarter rose just 0.3% year over year, and operating margins fell nearly 7 points, to 10.3%. It has also struggled with employee turnover.

As such, the chain is looking to simplify operations, an area Hochman believes tech can help. Take its new clamshell grills. With existing equipment, staff have to monitor a burger patty’s temperature and know when to flip it, all while juggling other back-of-house tasks.

“In clamshell world, you just hit a button and the burger’s right,” Hochman said. It takes just 2.5 minutes to cook a patty medium-well, which means the customer gets their food faster, too.

It’s also looking to digitize processes typically done with pen and paper, like daily line checks and inventory. Outfitting employees with tablets to complete those tasks “could save literally years of labor in our restaurants,” Hochman said.

The top of the company’s tech wish list is filled with similarly pragmatic items, like demand forecasting and an “online ordering governor” that can help pace the flow of orders into the kitchen.

Hochman also emphasized the need for a  solution to spotty wifi: “Anything that can allow us to have more stability in every restaurant would be really helpful,” he said, noting that internet connectivity was an issue at many of the restaurants he visited after becoming CEO in June.

Moderation should not be mistaken as a resistance to more cutting-edge technology. A visit to FSTEC’s trade show floor had Hochman buzzing about the prospect of using AI voice bots to answer the phone, for instance.

“That’s one of our challenges,” he said. “Our team members don’t have time to take phone orders, but we need them to because that’s sales.” He said he planned to bring the technology up at a meeting next week.

And he appeared open to other innovations, including the idea of allowing guests to pick their own seats like they would on an airline (“You know how many thousands of labor hours and millions of dollars we spend on hosts every year?”) and installing electric-car charging stations in restaurant parking lots.

He also revealed that Chili’s is testing a robotic arm to work the fryer station, but indicated that full-scale adoption could be a long way off.

“We haven’t been able to crack the code on that,” he said. “I think some of this physical stuff is a lot harder and takes a lot more time, and we may never get there.”