When a chef as innovative as David Chang begins raving about Taco Bell’s new mobile app, it’s clear that the digital era of restaurants has “arrived.” “The coolest thing ever is the Taco Bell app,” the chef-owner of New York City-based Momofuku said during a session at this year’s South by Southwest conference in Austin, Texas. “You walk in. No line. Sit down, and I have what you want—boom, it’s right there.” Chang’s words underline the growing interest in the concept of frictionless service—when transactions at restaurants, between ordering, paying and receiving a meal, happen with less human interaction to slow down the process. While that means a shift in the traditional relationship between guest and server, the enviable growth in sales at fast casuals, where the approach is prevalent, suggests that it’s a service model customers are embracing, as well. 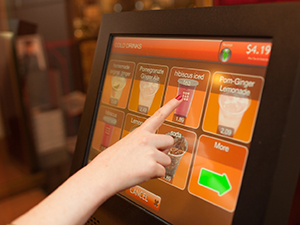 The term I use is “Uber-esque,” says Gary Price, president of Dallas-based Corner Bakery Cafe, referring to the mobile-app-driven, ride-sharing service. “That’s how you provide hospitality in the digital world.” Yet if a frictionless experience—like hopping in and out of an Uber car without having to stop to hand cash to the driver—is the goal, does getting there mean that restaurants have to give up certain service touch points that consumers have come to expect?

Not necessarily, says Alex Susskind, associate professor of food and beverage management at Cornell School of Hotel Administration in Ithaca, N.Y. “The long view is that as long as restaurants provide hospitality consistently, the technology should help that experience,” he says.

One way this tech-driven style can improve service is by freeing up employees to be more observant of customer needs. If employees do not have to be behind a register, they can work on the floor, helping customers operate self-ordering equipment, delivering food to the tables, offering drink refills or checking in if a diner doesn’t seem to be enjoying his meal. “The object is for  service staff to be present, regardless of the technology,” Susskind says.

At Corner Bakery, whether a customer calls ahead or puts in an order online, providing quick service is a top priority, says Price. When employees are freed up from a register, they pass out samples of warm cookie bites to customers waiting for to-go orders and check on guest satisfaction for dine-in customers. If a customer isn’t happy with an order, “it gives our managers the ability to rectify that on the spot and win over the guest,” Price says.

Last fall at the Cornell Hospitality Research Summit, a conference on future service-industry trends, Susskind presented a study that examined consumer reactions to self-ordering tablets at full-service restaurants. The research found that more than 70 percent of participants said using tablets improved their experience. Much of the satisfaction came from convenience and being in control. “When they are ready to leave, they want to leave,” Susskind says. “You swipe a credit card, press a button and leave. It’s a step that the customers can take in their own hands.”

Vapiano, a fast-casual concept based in Hamburg, Germany, with nine U.S. locations, aims to deliver this same sense of control through its chip-card program. Every customer gets a card to scan at various stations in the restaurant, from pasta to salads to beverages. Rather than placing an order with an employee at a register, diners communicate directly with the cooks preparing the food. Customers then can get up to order more food and drinks during the course of their visit. The card tracks the order, and the guest pays only once—when presenting the card to a cashier on the way out of the restaurant. (The same card system is used in all 32 countries in which Vapiano operates.)

“[The guest is] in control,” says Carlos Politano, CEO of Vapiano USA. “You sit anywhere you wish, you can get up and pay at the register when you want. If you want to go to the bar and have a cold beer or a glass of wine, you have the flexibility of using the technology to not wait for anyone.” At night, if guests prefer to stay seated, they can order drinks from servers on the floor who carry handheld devices to swipe customers’ cards. Politano says Vapiano’s service style appeals especially for working lunches, when people from the same office may arrive at different times. “I can walk in, I know Joe is coming, but I want to order a pasta. It might take 8 minutes, so I’ll order it and wait for him,” Politano explains.

Kiosks are the “control” mechanism of choice at Chicago-based Wow Bao. Geoff Alexander, managing partner of Wow Bao and executive vice president of Chicago-based Lettuce Entertain You Enterprises, was won over by the technology after using a kiosk allowed him to skip the line at the polling station during the 2008 presidential election. “It was so intuitive that it was like, ‘Why aren’t we doing this?’” he says.

But simply putting control in customers’ hands doesn’t ensure a smooth transaction—particularly when technology is involved. When the kiosks first were installed in Wow Bao locations in 2009, Alexander stationed an employee nearby to help with ordering and bring customers up to speed. Volume tripled at one location, and it became necessary to move the employee to the back of the house to help fill orders.

Today, kiosks are in five of Wow Bao’s seven units. And while customers still have the option of reciting their order to a staff person at a counter, the vast majority of customers use the kiosks, Alexander says.  It is common for there to be a line 12-deep at the kiosks while the register line is nearly empty, he adds. The reason? Again, it comes down to convenience and control. The machines can remember a customer’s previous order, making it easy to purchase the same meal. There also are separate screens for vegetarian or gluten-free customers. “It allows the consumer to have control,” Alexander says. “If they want extra this or that, they don’t have to worry that someone is going to mess up their order. From our standpoint, the control is in the customer’s hand.”

More fast-casual chains are warming to kiosks. Since launching its high-profile, high-tech initiative Panera 2.0, St. Louis-based Panera Bread Co. is experimenting with offering a mix of digital-ordering platforms, including kiosks. To increase kiosk usage, some stores place a sign promoting free cookies with each kiosk order. The chain plans to convert up to 300 more restaurants to its Panera 2.0 system this year.

When a customer downloads a restaurant app to a smartphone, it’s another opportunity for an operator to strengthen its relationship with the customer—even one who never interacts with a server. “It’s my logo in their pocket,” says Brian Reyelt, director of marketing for Tasty Burger, a four-unit operation in Boston.

Yet mobile apps aren’t always strong sales generators, a possible indication that seeking out and downloading a restaurant-specific app may be more trouble than it’s worth for some consumers. At many restaurants, orders still are done largely over the phone or via desktop computers. At Corner Bakery, 35 percent of catering orders are made digitally, and nearly all come from desktop computers. In addition to offering in-store ordering on kiosks, Wow Bao allows guests to order ahead online through its website and app. Still, it finds smartphones are the least-used device for placing orders digitally. “It’s rare that you’re ordering from the phone,” says Alexander. “If you’re in the office, you’ll be at a desktop.”

Integrating loyalty programs into apps may be the way to entice more consumers to buy into using them—plus they’re another hospitality touch point. That’s one of the reasons that Corner Bakery is redesigning its app (which it will roll out nationwide later this year) to incorporate its loyalty program. At Tasty Burger, which already has an app with an integrated loyalty program, half of the orders are made online, and of those orders, most come from mobile devices, Reyelt says. If a customer dines at Tasty Burger frequently, Reyelt sometimes offers a more personal form of thanks than sending a coupon to their phone. When he notices a client has spent a lot of money in a month, “I can reach out and say, ‘Hey, have lunch on me,’” he explains.

What’s clear is that digital-ordering systems aren’t going away. In fact, utilization of digital platforms continues to grow, especially among millennials. According to a survey commissioned last fall by the National Restaurant Association, 53 percent of millennials are more likely to use restaurant-technology options now than two years ago, compared with 26 percent of baby boomers. And during a February earnings call, Panera CEO Ron Shaich said that while only 8 percent of company sales currently come from digital orders, he anticipates that this will grow to 30 to 50 percent in the future.

Still, as technology proliferates, operators must continue to find new ways to deliver service to customers who expect no less in restaurants. The same NRA survey found that half of respondents simply prefer to interact with people when going out to eat—the opposite of frictionless. “Things change, but the basic notion of what a restaurant provides has not changed in 300 years,” says Susskind. “It should be about the customer feeling good about the experience, whether that’s picking up a burger at a drive-thru or sitting down at a five-star restaurant.”

A few of the new phrases infiltrating the everyday lexicon of restaurants: