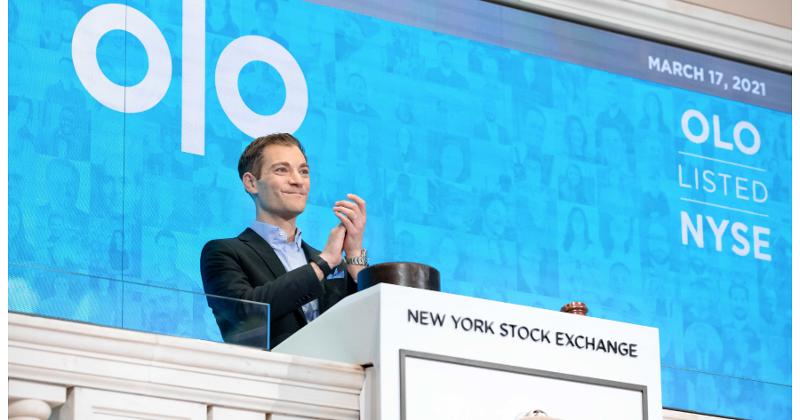 Its stock price took off when markets opened, and shares were trading at more than $30 by midday, an increase of about 22%. On Tuesday, the New York-based company landed on a share price of $25 for its 18 million shares, a big jump from its initial range of $16 to $18, which was later upped to $20-$22.

Olo is coming off a year of massive growth fueled by the pandemic, and the larger-than-expected debut suggests investors believe that growth will continue. It surpassed 1 billion transactions in 2020 amid a steep rise in digital orders, generating 94% revenue growth and net income of $3.1 million, according to a prospectus filed with the SEC.

Olo, which stands for “online ordering,” was founded in 2005 by Noah Glass as a service enabling customers to order food via text message. It has grown into one of the leading e-commerce providers for chains, offering online ordering, delivery integration, personalization and other software-based services to more than 64,000 restaurants across 400 brands including Five Guys, Wingstop, Shake Shack and Chili’s. It also integrates with more than 100 other tech platforms.

The company said proceeds from the offering will go toward “general corporate purposes” as well as potential acquisitions. Its growth strategy includes adding more large and/or fast-growing restaurant chains to its platform, getting more existing customers to use other Olo products and launching new products.

“We believe there is an incredible opportunity to add more restaurant customers, sales volume, and product offerings. That’s our not-so-secret formula,” Glass wrote in a letter included in the filing.

The company will be listed on the New York Stock Exchange under the symbol OLO. Goldman Sachs and J.P. Morgan Markets are the joint lead bookrunners for the offering.