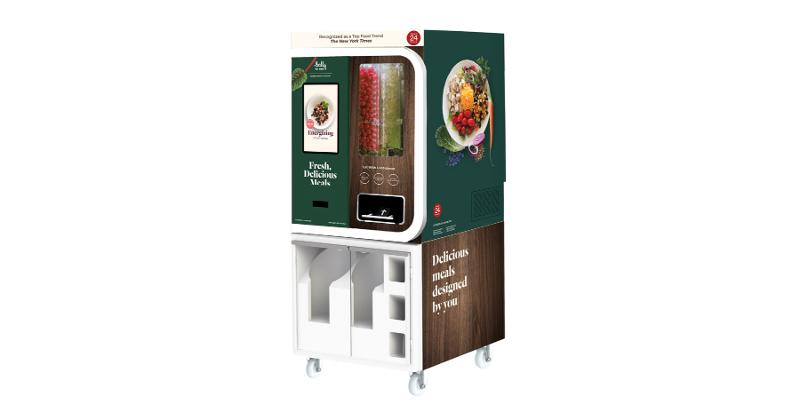 Sally was invented in 2014 and praised for its innovation. / Photograph courtesy of Chowbotics

Washington University in St. Louis was a big fan of Sally the salad robot.

The school installed four of the 3-foot-by-3-foot kiosks on its campus in the fall of 2020. It was looking for a way to replace its salad bars while they were shuttered due to COVID-19.

The bots, made by a company called Chowbotics, fit the bill and then some, serving up fresh salads 24/7 with zero human interaction required. They were an immediate hit, especially late at night.

“We loved it,” said Andrew Watling, Wash U’s associate director of dining. “We were one of their flagship campuses they really used to highlight the success of the program.”

In February 2021, Chowbotics was acquired by DoorDash. The third-party delivery giant had plans to expand Sally beyond hospitals and universities to restaurants.

The deal didn’t initially change much for existing customers like Wash U. But it was ultimately the beginning of the end for Sally: 18 months later, the company announced it was shutting down Chowbotics after the bots failed to meet expectations.

“At DoorDash, we create an environment to build new products and set high standards to determine when to scale, continue, or cut back investments,” the company said at the time. It declined to comment further for this story.

Soon after, the Sallys at Wash U and hundreds of other locations were removed. The sudden ending came as a surprise to operators, some of whom are still struggling to find a replacement for the beloved bots.

“It’s definitely disappointing that that program was ended,” Watling said. “I felt like, at least for us, and I think a lot of other people, it was doing well.”

“People appreciated the quality of the salad, the experience, the ability that they could prepare the dish how they wanted.” —Kevin Steffes, Carle Health

Chowbotics was founded in 2014 by serial inventor and entrepreneur Deepak Sekar. He claimed Sally was the first commercially available fresh-food-making robot. Its selling points were customization and round-the-clock service, and its technology was cutting edge: The National Restaurant Association Show praised Sally’s “sophisticated robotics” and precise portions when it named Chowbotics a Kitchen Innovation Award winner in 2019.

Sally could dispense made-to-order salads and other bowl meals from up to 22 ingredients. Customers ordered on a touchscreen, paid and were on their way with a fresh salad in just a few minutes.

The bots reportedly cost $30,000 and could be programmed by each operator with their own ingredients and menus. Wash U even used Sally to offer a special selection of reheatable meals during Ramadan.

Its success seemed to be more than just a pandemic phenomenon. Carle Health in Urbana, Ill., bought two Sallys last October as alternatives to a self-service salad bar. At their peak, the bots were selling as many as 150 salads a day.

“We struggled to keep that robot stocked when we first implemented them,” said Kevin Steffes, director of food services at the hospital system.

Sales fell by about half after the hospital opened a new retail area, he said, but the bots remained popular with a core group of regular customers.

“People appreciated the quality of the salad, the experience, the ability that they could prepare the dish how they wanted,” Steffes said. And the foodservice director liked them because it allowed him to repurpose labor.

“There’s a lot of product that I think is just not quite ready for mainstream use.” —Andrew Watling, Washington University in St. Louis

The loss of Sally has left a void that has proven difficult to fill. There are other food robots out there, but none are quite like Sally, operators said.

“It’s been a headache for me trying to replace it,” Watling said. “I haven’t been able to find one that does salads.”

Robotic food kiosks have proliferated in recent years, serving everything from pizza and smoothies to burgers and ramen. All have their eye on the nontraditional venues like airports, campuses and hospitals where Sally took hold. But few if any have had the same success.

“There’s a lot of product that I think is just not quite ready for mainstream use,” Watling said. Sally “was a very ready-to-go product. It had already kind of figured out some of the things that it needed.”

And the way DoorDash abruptly pulled the plug has made operators wary about investing in unproven technology.

“I think robotics are a tougher sell for me now with senior leadership,” Steffes said. “I would really have to do a lot of due diligence to make sure it’s the right thing for us at this point in time.”

For Watling, it was a reminder of how operators can be at the mercy of their suppliers. “It will change how we think about bringing in partnerships like that that don’t leave us with a lot of autonomy,” he said.

Wash U ultimately replaced Sally with three Farmer’s Fridge machines, which sell pre-packaged salads. They’re not a perfect substitute, Watling said, but the food is high-quality and they offer the late-night option students want.

Carle has also looked into Farmer’s Fridge, but it’s not available in Urbana yet. It’s considering expanding the hours of its staffed salad bars or investing in a smart fridge.

“We had to rethink what that whole process looks like and haven’t really landed on a permanent solution,” Steffes said.