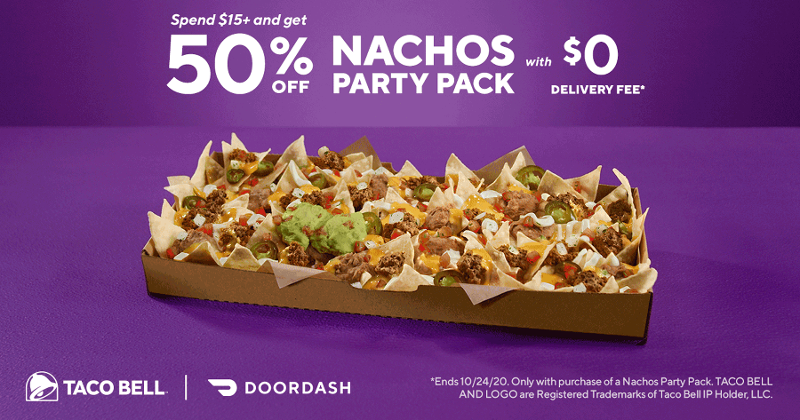 Taco Bell will now be available via DoorDash at more than 5,500 U.S. locations, or 75% of the chain, the companies announced Wednesday.

It is the second Yum Brands concept in two months to make a big shift to DoorDash after the end of Yum’s exclusive deal with Grubhub. That fell apart in June after Yum sued Grubhub, alleging the service had attempted to end their relationship without warning. Last month, Yum concept KFC announced a DoorDash partnership at 3,000 units.

“We’re excited to team up with DoorDash to give our fans the ability to satisfy their cravings for Taco Bell more easily,” said Nikki Lawson, Taco Bell’s chief global brand officer, in a statement. “Growing delivery has always been a priority for the brand, and through this partnership, we're thrilled to give fans exclusive offers that are sure to spice up any celebration.”

The Irvine, Calif.-based fast-food chain has recently focused on boosting its drive-thru and pickup capabilities. It has seen a surge of drive-thru customers amid the pandemic, and in August announced a new drive-thru-centric prototype called Taco Bell Go Mobile. The DoorDash deal offers yet another channel for a Taco Bell customer who appears to be increasingly mobile.

“This partnership has been a long time in the making and we’re excited to offer Taco Bell fans across the country another way to get their favorite tacos, burritos and quesadillas to their doorsteps,” said Toby Espinosa, VP of business development for DoorDash, in a statement.

To promote the partnership, DoorDash users can get 50% off Taco Bell’s Nachos Party Pack, and free delivery when they spend $15 or more, through Oct. 24.

A lot more restaurants are paying their rent