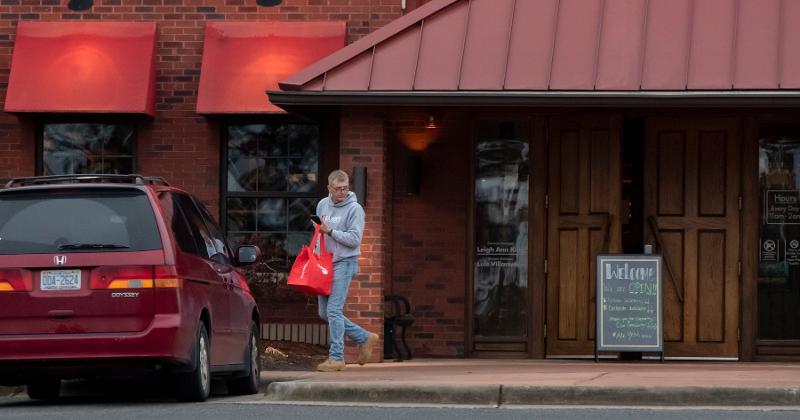 Restaurants don't seem worried about any potential negative effects of delivery fee caps, despite a recent report from DoorDash that the limits are hurting its volumes—and restaurants' sales.

The temporary caps in dozens of municipalities have prompted the delivery company to raise prices for consumers by $1 or $2. That led to volume declines in March in some markets, like Philadelphia (-7%) and Westchester County, N.Y. (-4%).

"For the most part, restaurants make more money when they have customers coming in to eat at their restaurants versus ordering takeout, and we have been told by our members that business has been steadily improving," said Melissa Fleischut, president and CEO of the New York State Restaurant Association, in an email.

The 20% fee cap in Westchester County began in October, "and there was no evidence that this cap resulted in fewer deliveries," she said.

Restaurants in Philadelphia "are completely in favor of the fee cap," said Ben Fileccia, director of operations and strategy for the Pennsylvania Restaurant and Lodging Association. "It’s really helped them survive this past year. Philly is one of the most mitigated cities in the country as far as indoor dining and even outdoor dining."

Fileccia said restaurants would like the temporary 15% cap "to continue for perpetuity." And he said he had no problem with consumers bearing more of the costs of delivery.

"If the customer wants the convenience of having food delivered, they should pay for that."

Fleischut said she hopes to work with the delivery companies on a "sensical fee structure."

"By supporting legislation to help reduce fees on restaurants during the worst year ever, it was never our intention for DoorDash to simply shift costs from restaurants to consumers," she said.

The disagreement could pose a real challenge for DoorDash, which said it lost $36 million in Q4 as a result of the caps as well as extra costs associated with Proposition 22 in California. There has already been buzz about making fee caps permanent in New York City and elsewhere.

Toast upgraded its ordering and payment platform. The restaurant tech provider has added two new features—pre-authorization and group ordering—to its Order & Pay product that allows guests to order and pay from their smartphones.

With pre-authorization, a guest can authorize their credit card on their smartphone to open a tab and start ordering. The information is shared with the restaurant's larger Toast system, so staff can seamlessly switch from guest-led to server-led ordering if necessary.

Group ordering allows multiple guests to add items to a single order from their smartphones. The order is sent to the kitchen on one ticket with individuals' names attached to each item.

Uber is eyeing weed delivery. The company will "take a look" at delivering cannabis once it's federally legal to do so, CEO Dara Khosrowshahi told CNBC last week. Recreational weed is legal in 16 states, but delivering it is allowed in only six. There are efforts at the federal level to make weed legal nationwide.

It wouldn't be a surprise to see Uber get into delivering weed—it already delivers alcohol, groceries, convenience items and other goods, in addition to restaurant food. But it also wouldn't be the first delivery provider to do it. The small company Waitr is developing its own marijuana delivery marketplace.

A drone company is launching lunch delivery. Deuce Drone will  deliver meals from the Legacy Village retail center in Mobile, Ala., to the BB&T Financial Centre office complex less than a mile away. Tenants of the building can order and pay for lunch on the Deuce Drone website and it will be brought to them by one of Deuce's "unmanned aerial systems."

Legacy Village restaurants include Jimmy John's, Panera Bread, Blaze Pizza and other national chains. The drones will be able to carry between 5 and 10 pounds of food per flight. Mobile-based Deuce said the test will allow it to generate revenue while also fine-tuning its service.

Some ghost kitchens are shedding the shadowy image.

Automats are making a comeback, with some high-tech twists.

A pay-at-table startup called Sunday launched with a $24 million seed round.