Imagine if the course of food trends was reversed and home kitchens suddenly became the source of the best and most interesting culinary ideas. In that alternate reality, restaurants would be the followers, not the innovators, hoping to catch up with customers who were routinely more inventive and advanced. 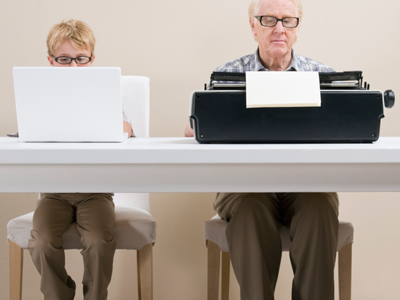 Cue Rod Serling, because that’s exactly the Twilight Zone restaurants have entered with technology, according to speakers at the recent FSTEC conference. As a number of them explained, youngsters coming into restaurants as customers or employees are typically lugging more sophisticated devices than the technology they encounter inside.

And “anytime consumers have better technology in their hands than we do in our restaurants, that’s a potential that we not only have to address, but that could potentially harm us,” observed Don Zimmerman, the chief technology officer for Wendy’s.

Employees accustomed to intuitive and user-friendly devices find themselves grappling with systems that are much harder to navigate, noted Kelly Maddern, the newly appointed CIO of Burger King.

Then there’s the disconnect between the fixed technology stations typical of restaurants and the mobility that’s second nature to youngsters with smart phones or tablets affixed to their hands.

Customers can also feel they’ve hit a time warp with some of the technology they encounter, like faded, static menu boards that bear little resemblance to the dazzling information screens they routinely see elsewhere.

Sometimes it’s what they don’t find in a restaurant, like free WiFi service. If you don’t offer it, and “if customers have a choice of going into an establishment across the street that does have WiFi, you have to be very careful, because we see that becoming more important,” said David Matthews, chief information officer for the National Restaurant Association.

“For them, technology is second nature,” remarked Maddern.

Rob Grimes, the tech consultant who emceed FSTEC, recounted how an unnamed restaurant chain wanted employees to use their own phones for work purposes, the way delivery drivers use their own cars. He suggested the set-up could be the model for the future. Instead of teaching crewmembers how to use a POS system, he suggested, chains would merely download an ordering and sales app to a new hire’s phone.

A panel being moderated by Grimes disagreed—to a point. Matthews suggested that tablets could supplant the clunky hardware component of today’s POS set-ups. That way, he explained, restaurateurs would only have to focus on selecting the right software.

Indeed, the hardware component of tomorrow’s POS systems will be largely irrelevant, said BK’s Maddern. “We have to continue to look at the software side,” she said, with the search focused on what’s easy to deploy and “easy to use, so your employees can use it.”

“What’s driving that is a consumer-driven mentality,” the familiarity and ease of going down to the local RadioShack and buying a tablet for $599, observed Joe Finizio, president of a trade group called the Retail Solution Providers Association that promotes secure credit-card commerce.

“This ‘consumerization’ of technology is something we see as a stealth issue right now,” observed the NRA’s Matthews. “When your customers are bringing better technology to the workplace than the restaurant has, that’s a problem for us.”

FSTEC is a shopping and idea-sharing event for the tech specialists of the restaurant business.