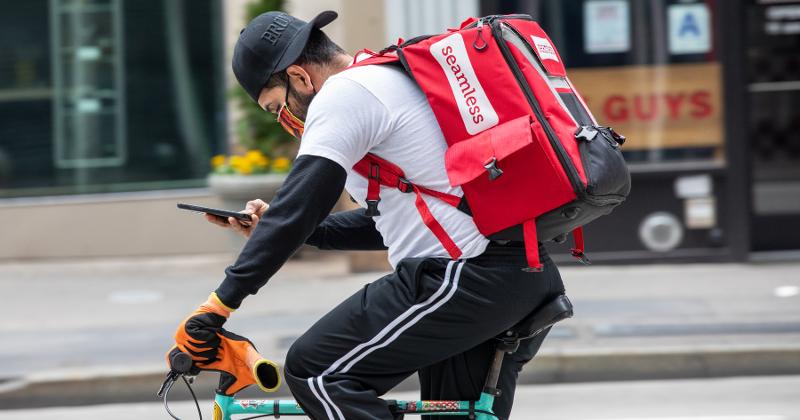 Third-party delivery companies just got a big endorsement in their battle against fee caps in New York City.

The U.S. Chamber of Commerce, the country’s largest business lobbyist, filed an amicus brief last week in support of the companies in their lawsuit against the city, saying the permanent caps will ultimately hurt the restaurants they’re intended to help.

In August, New York officials approved a permanent limit of 15% on the delivery fees companies like DoorDash, Uber Eats and Grubhub are allowed to charge restaurants. They also capped all other fees at 5%. The limits are an extension of a temporary cap put in place earlier in the pandemic to help restaurants.

The three companies responded with a lawsuit in September arguing that the cap was unconstitutional and “driven by naked animosity toward third-party platforms.”

In an amicus brief filed March 29, the Chamber of Commerce backed the delivery companies’ claims, saying that “there has long been a consensus among economists that price caps have harmful, counterproductive effects.”

In this case, it said, the caps will force delivery companies to raise prices for consumers and also cut back their services, depressing demand and ultimately impacting restaurants’ sales.

“The Ordinance will harm, rather than help, the very restaurants that the City purports to be protecting, while harming other market participants in the process,” it wrote.

Supporters of the fee caps say they’re needed to level the playing field for local restaurants against the big, well-funded delivery companies.

“The U.S. Chamber of Commerce delivered a horrible message that they support billion dollar 3rd Party Delivery Companies at the expense of struggling independent restaurants in NYC by joining their effort to try and overturn the essential fee cap law,” said Andrew Rigie, executive director of the New York City Hospitality Alliance, in a tweet last week.

Temporary fee caps became widespread during the pandemic as governments sought to help restaurants that had come to rely heavily on delivery to survive. Before the caps, delivery fees were typically around 30% or more.

Many of those limits have since expired, though a few cities, including New York, Chicago and San Francisco, have enacted legislation to make them permanent.