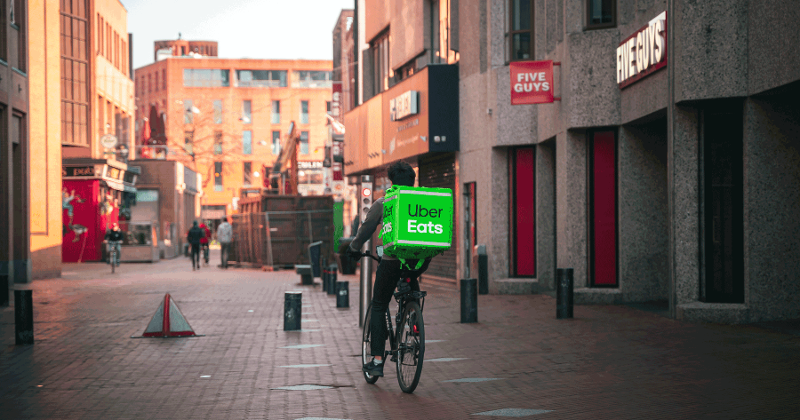 California gig workers including DoorDash, Uber Eats and Postmates drivers could be reclassified as full-time employees if a measure on Tuesday’s ballot fails, which could have a big impact on restaurants that use the services.

The measure, called Proposition 22, would allow those drivers to continue working as contractors.

Gig companies like Uber and DoorDash have spent millions to promote Prop 22, and the race will likely come down to the wire on Election Day.

If the measure passes, ride-share and delivery drivers would continue to operate as contractors, with some added benefits such as healthcare subsidies. If it fails, those drivers could have to be reclassified as employees, with all the associated wage protections and benefits.

That’s because of an existing California law known as AB 5, which went into effect Jan. 1. It required companies that use independent contractors to reclassify them as employees. Gig companies Uber and Lyft have refused to comply with the law and took the dispute to court. Earlier this month, a California appeals court ruled the companies must comply with AB 5 if Prop 22 fails. (The companies could choose to appeal the ruling.)

Gig companies have poured money into Prop 22, making it the most expensive ballot initiative in California history. Supporters have contributed more than $189 million to the campaign, including $51.2 million from Uber and $47.5 million from DoorDash, according to Ballotpedia. Opponents, which include labor unions, have contributed about $18 million.

Polls suggest the results will be close. A poll released Monday by UC Berkeley’s Institute of Governmental Studies found that 46% of voters were in favor of Prop 22, 42% opposed it, and 12% were undecided. It needs more than 50% of the vote to pass.

What it could mean for restaurants

Backers of Prop 22 said that switching drivers from contractors to full-time employees will force the companies to reduce their number of drivers, resulting in longer wait times and higher delivery costs.

They cite a Berkeley Research Group study, funded by pro-Prop 22 group Yes on 22, that found average wait times for food and grocery delivery could double, and the cost of the service could increase from 35.2% to 100% in some markets.

“Given that there would be higher prices and longer wait times, I think that starts a downward spiral of fewer people using these types of services,” said Geoff Vetter, spokesman for Yes on 22.

That could hurt restaurants for whom third-party delivery has become an important channel, especially during the pandemic. But it could also encourage consumers to get their food other ways, such as curbside pickup, drive-thru or old-fashioned takeout—a dynamic some chains, such as Chipotle, are already pushing.

“There’s a tipping point for the customer,” said André Vener, partner with Pasadena-based hot dog chain Dog Haus. “We’re already at the point where we have to mark up food for delivery.”

If Prop 22 fails, and the price of delivery goes up even further, “I think it’s gonna then really drive people back to the old way of at least picking that curbside delivery or coming to the restaurant to pick up.”

Dog Haus is working to improve its curbside capabilities as well as its app and other technology to help build those non-delivery channels, he said. And it’s making itself a preferred customer for delivery companies by offering a selection of virtual brands, which have boosted ticket sizes.

Those who support making drivers employees said it would make those workers more reliable, improving the delivery experience for all parties.

“I think this will actually have a positive impact on restaurants,” said California Assemblywoman Lorena Gonzalez, a Democrat who authored AB 5. “If these delivery companies employed their drivers, the horror stories we so often hear would be lessened because you’d have a more reliable workforce.”

Gonzalez said it could also push restaurants to move away from third-party delivery and find innovative ways to provide the service, such as banding together to form delivery co-ops.

That’s not something Dog Haus is considering, Vener said, but the chain is looking into using scooters for self-delivery, in addition to investing in other off-premise channels.

And what if Prop 22 passes and drivers continue working as contractors? Vetter said restaurants would see something “similar to business as usual,” while Gonzalez said it robs drivers of rights they’re entitled to, and would make the gig companies harder to regulate.

Regardless of what happens Tuesday, Vener said the delivery business model will eventually need to change, and restaurants should get out ahead of whatever that looks like.

“We have to be proactive and expect for change to happen in the next six months, one year to two years, so might as well start moving in that direction,” he said.