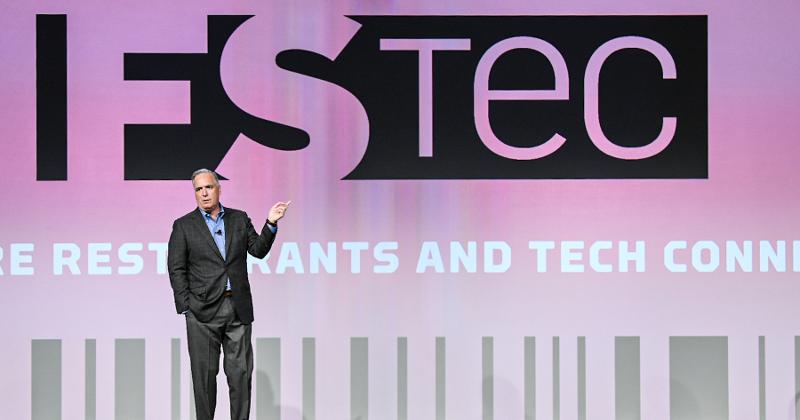 Bring together more than 1,200 leaders in restaurant technology and you’re sure to hear nonstop speculation about which advances will next disrupt the business. Here are some of the predictions that caught our attention at FSTEC, a three-day conference focused on the digital transformation of restaurants. FSTEC is presented by Winsight, the parent company of Restaurant Business.

Two years ago, the notion of using a facial scan to identify and charge a restaurant customer seemed the stuff of science fiction. At that this year’s conference, several operators acknowledged they’re investigating it, though at most in extremely limited tests. None would predict when the capability might hit the mainstream, but several noted the proof provided by Amazon Go that the needed technology can work in high-volume situations. And there was a prediction that POS systems will eventually be rendered obsolete by the combination of instant recognition and cashless payments. Yet cashless payments were mentioned far less as The Next Big Thing than they were at FSTEC 2018.

A number of exhibitors showcased ways of replacing humans with technology that can analyze fluid situations and provide seemingly thoughtful responses, often in voice form. The systems were touted as ways of providing enhanced service without additional labor, such as politely responding to the information-type phone calls (“Do you offer gluten-free options?” “Do you provide parking?”) that tend to distract the staff during the height of premeal prep. Fewer mentions were made of equipment that learns from experience just as humans do, but Focus Brands CIO Michael Verdesca cited that machine learning as a game changer lying in the not-so-distant future.

A fellow traveler of artificial intelligence and machine learning, technology that can read and respond to verbal commands is already being used for rapid reordering; consumers can state their favorite order into a so-called smart speaker in their homes. But presenters at FSTEC suggested that voice recognition is being adapted for a host of other uses, such as providing prep instructions upon request for kitchen workers who can’t leave their posts to study a recipe card or call up how-to information on a computer screen. “We are so far out from being 100% automated” on voice recognition, said Sterling Douglass, CEO of Chowly and a participant in several presentations at FSTEC. Human backup is still needed at this stage of the game, even for rapid reordering, he stressed. But “when you have human backup, you can get a 50% reduction on your costs.”

The production facilities may be aptly named, judging from how frequently they were mentioned during FSTEC. The concepts seemed dead and buried after high-profile early adopters such as Munchery and Sprig failed to make it. But the idea of building faceless kitchens in less-expensive and often remote areas to provide meals exclusively for delivery was much-discussed during the conference, suggesting a resurgence of the notion. The difference this time around was the expectation that the kitchens would produce food sold by established brands, not unknown upstarts.

Echoing the buzz outside FSTEC’s conference rooms, presenters and attendees noted that the traditional third-party delivery setup is undergoing rapid changes. No longer is it a matter of agreeing to pay a 20% to 30% commission, take it or leave it, and forgoing any claim on the customer information that’s gathered by the likes of Grubhub or Postmates. Commissions are coming down, said Focus’ Verdesca, and discussions are being opened about sharing the all-important customer data that’s captured through the third parties’ platforms. Indeed, said Douglass, some services are crunching the data to help their restaurant partners rewrite their menus specifically for delivery. “People who do menu optimization, they can double their execution rates,” he said. “They’re literally doubling their business.”

He also offered firsthand proof that operators can now cherry-pick what functions they get from the third parties. Chowly announced during FSTEC that its system now allows restaurants to field delivery orders via their own apps and websites and then have the food delivered through DoorDash.

FSTEC was held Sept. 8-10 at the Hilton Anatole in Dallas. Next year’s conference is scheduled for Oct. 25-27 in the same location.