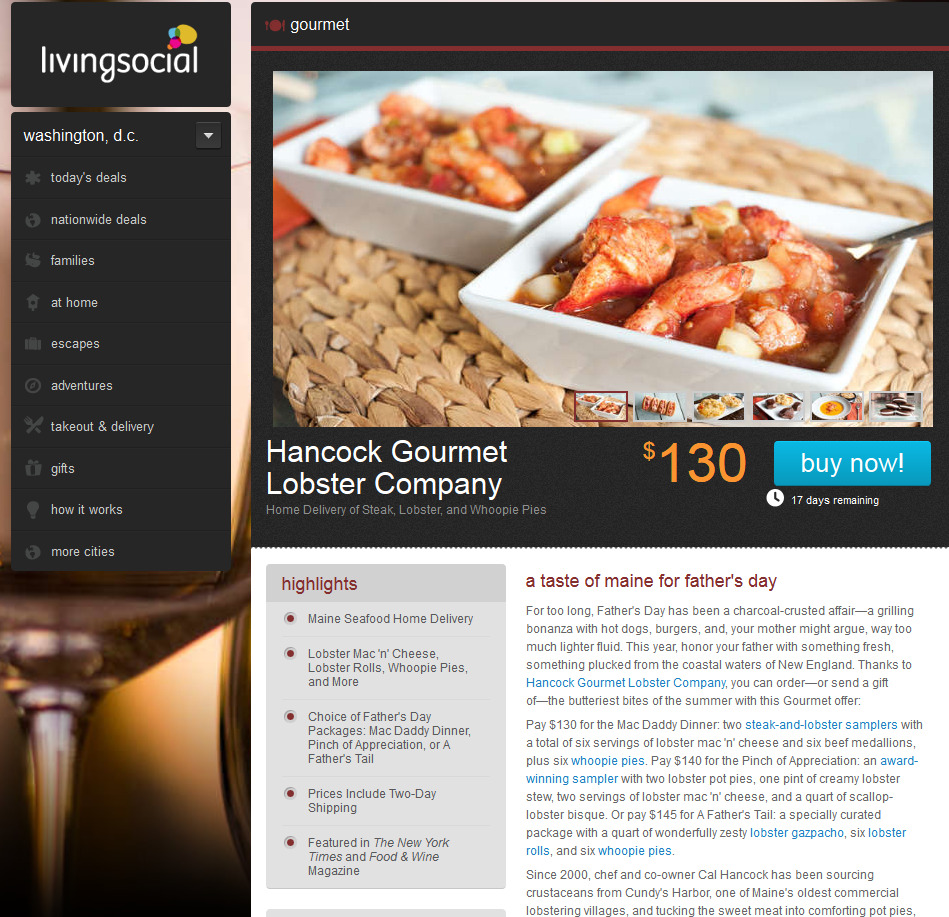 Using an e-commerce model that mirrors other LivingSocial programs, Gourmet participants purchase deals online during a selected time period. These food fans, however, are not necessarily bargain hunting, but instead are on the lookout for unique culinary experiences with top chefs or access to special packages constructed by epicurean markets.

Gourmet offerings, while providing “value” to the member, don’t come cheap: prices start at $100 and go from there, depending on the experience offered.

The number of guests for restaurant events varies with the individual experience. For example, a New Year's Eve event at ChurchKey in Washington, D.C. had a cap of 150, while a sushi-making class at Nombe in San Francisco had a ceiling of 18.

“We're seeing a great number of offers sell out, including Little Owl in NY, ChurchKey in D.C. and iNG in Chicago, among others,” says Olvey.

For chefs and restaurateurs, Gourmet hand delivers affluent, upscale customers longing for that ultimate one-of-a-kind food experience. It also lets them demonstrate their creative chops to an appreciative audience.

In New York, members were able to take part in a traveling dinner party hosted by Chef David Burke, and created by his director of marketing & branding, Joel Erlich. For $295, guests were treated first to a food fest at Fishtail by David Burke, which included a sampling of raw oysters, lobster dumplings and sea urchin push-up pops, followed by pastrami-spiced salmon with cranberry-mustard vinaigrette and cracker-crusted crab cakes with tomato marmalade and cumin-citrus glaze.

Chef Burke then led the group to the David Burke Townhouse, the chef’s flagship restaurant just down the street. This was no ordinary dining experience, however. Guests were at Burke’s side in the kitchen as he sliced veal and shaved black truffles; they then all sat down together in a private room to dine.

“For restaurateurs, one of the best uses of technology is the opportunity to connect with customers,” acknowledges Olvey.

The online to offline experience also delivers for high-end food suppliers. “LivingSocial Gourment gives us exposure in a different way—and to different cities—than we had before; that is the biggest benefit,” says Cal Hancock, owner of Hancock Lobster. “As much as you try to market online to as many people as you can, there are so many people you don’t get to.”

The food purveyor has seen a 15-20% uptick in website visits since the shop started participating in Gourmet’s events.

Cal Hancock first met up with some of LivingSocial’s reps at the 2011 International Fancy Food Show in D.C., where the lobster shop won several awards for its delectable culinary fare.

“What enticed me about Gourmet was that it was specific to food—and to good food at that; some of the other organizations that are similar to LivingSocial are all over the map,” says Hancock. “We started out with offers in Philadelphia and D.C. in December; and then in January offered it to four more cities.”

There’s always a danger that folks will wait for the promotions to buy, admits Hancock. “The assumption is when you do this, you are going to get a deal. But if someone is entertaining, and they need something for a party, it doesn’t matter if there is a deal or not,” she says.

Along with the increased exposure, Hancock is reveling in the phone conversations she has with customers.

“We get a lot of positive comments about the food and that they plan to order from us again,” says Hancock. “We find that the Gourmet members are really excited about trying something different.”