As the economy goes, so goes catering. And with the nation’s economic horizon brightening, consumers and restaurant operators are, once again, spending more on off-premise dining. 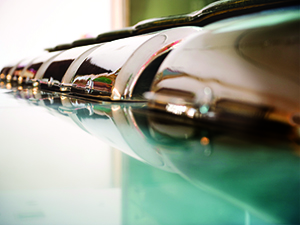 But as the segment grows—driven largely by gains in full service’s and fast casual’s catering arms—a nagging problem continues to pester: With concepts so clearly defined by their in-store branding, how can operations maintain brand integrity when customers aren’t in the restaurant. Turns out, operators are tackling the issue with new creativity.

Now, with the recession subsiding, catering is back across the board. According to Catersource—a media, conference and trade show company—2013 catering sales beat a projected 5 percent increase by 1 to 2 percent. Projections for 2014, showing overall sales of $47.5 billion, represent another 5 percent increase. Restaurants account for about $20 billion of that.

“We are forecasting positive growth moving forward,” Wilson concurs. She says restaurants are stealing market share from other catering options because they are focusing more on the business of it than in years past. “There were a lot of segments and operators that were, to an extent, inadvertently in catering, garnering business just based on consumer request,” she says. “They didn’t have a dedicated focus. That has shifted quite a bit. As more operators have eyed competitors and others with success in the business, they see this is a tremendous opportunity to grow revenue.” She adds, “This is healthy for the industry, because a lot of restaurants are taking share from grocery stores and independent caterers.”

Carl Sacks, director of consulting services at Catersource, agrees. “The restaurant companies that are doing well are the ones that have developed a catering infrastructure, catering managers, catering sales people. The ones that try to add it on to someone’s other responsibilities are unlikely to be as successful.” Concepts like Stephen Starr Restaurants and Fig & Olive in full service and Boloco and The Counter in fast casual are investing in dedicated catering infrustructures and finding rewards.

One of the industry’s advantages over other catering sources is the strength of its brands. Customers come to a restaurant and get to know it. As Sacks points out, independent caterers often surpass restaurants in market knowledge and dedicated sales teams, and they often have deeper relationships with local event planners. But operators have the advantage of a ready-built brand showcase: their restaurants. “One area where restaurants have the advantage is being able to bring event planners to their restaurants,” he says. “Independent caterers have to construct an entertainment venue to show what they can do.”

Philadelphia-based Stephen Starr Restaurants began catering in Philadelphia in 2007 with a five-person staff. It has since expanded into New York City and Miami and employs eight times as many people. “We have seen significant and sustained growth,” says Morgan Bedore, vice president of sales, creative development and marketing at the multiconcept, full-service operator.

It competes with independent caterers by leveraging its stores for marketing. “We host a lot of events for our best catering clients,” says Bedore. “We do cocktail classes, cooking demos. It keeps us fresh in their mind.”

Fig & Olive, a full-service chain with four restaurants in New York and two in southern California, hosted 500 event planners and other guests at its Hollywood restaurant last year to celebrate the launch of its off-site catering program.

But restaurants’ unique marketing opportunity also is their biggest challenge: how to maintain that in-store vibe outside the restaurant. Bedore says Starr’s 32 restaurants—in Philadelphia, New York, New Jersey, Miami and D.C.—focus on a “five sense, immersive” experience for diners, where every touch point—design, service, cuisine—reflects the brand. Its catering challenge, she says, is “how do we translate that to special events.”

Bedore says the first step in maintaining brand integrity off-site is understanding the client’s expectations, but then—just as important—understanding the venue. She says that some of Starr Events’ early mistakes centered around a lack of understanding of their mission and the venue. “Sometimes we didn’t ask the right person the right question,” she says. “Now we make sure we know who the key people are and what they need from us: what the marketing person needs; what the CFO needs; what security needs. That’s our starting point.”

Once the catering staff scopes out the venue—the proximity of the kitchen to the service area, how big the space is, what equipment already is on-site, what restrictions exist for power, flame and ventilation—then they decide what they can prepare that meets in-restaurant quality standards. For Starr Events, that means everything is prepared a la minute.

Next, serving staff is trained to the specifications of the venue. “We have consistent training across all our restaurants. We’re communicating the brand the same to everybody; communicating the food descriptions the same. Executive chefs are trained to prepare edamame dumplings the same. And then there is training specific to venues,” says Bedore.

Fig & Olive’s had been hosting high-profile events at its Hollywood restaurant, including a party for President Obama and an Emmy party for Fox. They began getting calls about off-site catering and had been doing small events before launching their dedicated off-site program last year.

Fig & Olive has built a reputation around design and cuisine. Off-site, they have found a great branding device in exhibition stations: you not only get the great food you would get at the restaurant, you get to see it prepared. “We keep everything clean and simple, just like in the restaurant,” says Samantha Heart, director of special events for California.

“One of the most popular [options] is our paella station,” says Heart. “We use one of those enormous paella pans, and it starts with just that huge pan with olive oil in the bottom. Then they slowly add the rice, the mussels, the shrimp. It’s incredible to watch.”

Technomic projects off-site catering for the fast-casual sector will increase 20 percent in the next two years, far outpacing all others. Fast-casual operators have the same demands of maintaining brand integrity off-site as full service, but they work with a smaller pallet of touch points than full-service caterers. To overcome this, many concepts are turning attention to the operations side of the catering business. As more chains are developing dedicated catering arms, they also are centralizing sales. Since sales is one of the most important ways a brand is conveyed, keeping it in as few hands as possible cuts down on the chance of mixed messages.

Twenty-two-unit burrito chain Boloco launched its catering service in July 2011. It now accounts for 5 percent of total sales. Its centralized sales operation is run from a call center at corporate headquarters in Boston.

“The relationship is captured here,” says Erin Childs, director of catering. “It’s important to me to manage any issues that might come through and to communicate with clients live as we need to limit errors.” If there is a problem in delivery to the event, the delivery person reaches out to the call center, and the call center staff communicates with the client. The call center also follows up with every client after an event. Accuracy reports are produced, showing how well the event was handled and later used in training.

Packaging also is a key touch point in fast-casual catering, and chains are leveraging it to maintain brand integrity in different ways.

Sustainability is important to Boloco’s brand. So all of its catering packaging can be recycled or composted.

At Chipotle, which launched its dedicated catering service last year, the challenge was “how to prepare food for catering and serve it in a way that replicates the restaurant experience,” says communications director Chris Arnold. The solution was packaging.

“We ended up with chafing dishes that can be set up anywhere and mimic a Chipotle service line,” explains Arnold. “The food is precooked in our restaurant, and the chafing dishes hold the food hot, much as we do on the service line in our restaurants.” Chipotle also is offering Burritos By the Box, “which allows us to accommodate catering requests for smaller parties,” says Arnold.

At 43-unit The Counter, the brand is built around build-your-own burgers and fresh ingredients, both a big part of its message. To extend that better-burger branding off-premise, the chain’s staff came up with ways to ensure food prepared in stores maintained its quality off-site.

The Counter had been doing catering piecemeal at its locations, but began a full program at its northern California locations last year. Catering sales have risen 600 percent in that time, says John Moraski, head of corporate business development.

At its Silicon Valley location—which has seen booming business as more tech companies follow Google’s lead of supplying free, on-site lunch to employees—food often is delivered in two waves: the first delivery sets up cold items and prepares warming stations for the hot items. The hot items then are taken off the grill at a Counter location and transferred directly into heated aluminum trays. Those trays are placed in plastic tubs with heating pads and the tubs are sealed. At the venue, the burgers are arranged at the warming stations, which already are set up. Burgers are cooked to medium and arrive medium well.

“When we open the trays on site, all the steam comes out. It makes a great presentation,” says Moraski. He says future plans include adding a catering marketing manager at each location and centralizing sales.

Technomic’s Wilson says the opportunities are large for fast-casual catering, but as more operators focus their attention off-site, growing an individual brand will become more difficult. And, she points out, retail will not watch its market share dwindle for long. Trendsetting grocery chain Publix, for example, just began testing a full catering program in two markets.