We noticed a significant leak in our household budget recently. It had nothing to do with sneaky bank fees or identity theft. The source of our financial geyser? My oldest son who, soon after his 10th birthday last December, emancipated himself from the children’s menu, declaring himself an adult, at least for the purposes of lunch and dinner. Overnight, the dinner check doubled for our family of four at the casual restaurant down the street. Now, instead of an under-$10 kids’ meal that includes food, a beverage and even dessert, we suddenly are paying for an additional full-size and full-price appetizer, entree, drink and dessert. This was not in the parenting books. 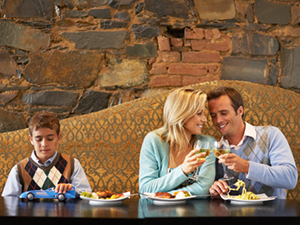 My search for transitional menus with portions larger than kid-size but smaller than full portions (and at a price point in between) has come up short—and that’s a problem. My son orders all the courses because we do, and because the kids’ combos he grew up eating trained him well. Still, he never quite finishes it all, and I can’t help but to look at his leftover food as money on the table.

And yet, big-kids’ menus are practically urban legends these days. Of course, McDonald’s has its Mighty Kids meal for “in-be-tweens” that it’s had for more than a decade, but like the awkward kid in the dodgeball draft, it largely stands alone. Burger King dropped its Big Kids Meal years ago for the one-size-fits-all-kids approach that most QSRs seem to have, and last summer Taco Bell boasted about ditching its kids’ menu entirely, calling sales of kids’ meals insignificant and not part of its long-term strategy.

Sure, my boy could cobble together a junior-size meal from items on restaurants’ value menus or from appetizers, but it’s interesting that the industry that invests so many years and so many dollars ($4.6 billion a year at QSRs alone, at last count) engaging young children abandons them in the middle of the adult menu by the time they hit 10 or 12.

Hopes for a big-kid-menu revolution any time soon are slim, understandably, given that restaurant visits by families with kids have declined. But there may be a solution in a trend that Restaurant Business reported on in a previous issue: tiered menus. What Denny’s and Red Robin have done for adult menus—grouping items by price rather than menu part so guests can mix-and-match meals based on how much they want to eat and spend—Applebee’s is applying to kids’ menus, with big kids in mind. In January, the Kansas City, Mo.-based chain overhauled its kids’ menu, making it customizable with two tiers of kids’ entrees—“Really Hungry” (traditional faves such as mac and cheese and chicken tenders) and “Really, Really Hungry” (larger, heartier portions such as a 4-ounce sirloin, fried shrimp or a pair of burgers)—plus one side and a drink. Friendly’s has a similar offering on its Lil’ Scoop and Big Scoop kids’ menus, which it also beefed up in January. Many of the items deliver on parents’ overwhelming demand for healthier options, and the restaurants play up the customization aspect, which should be a slam dunk for independent-minded tweens. Best of all, the items clock in at under $6 for food and drink versus the more than $9 for an adult burger alone.