On a recent visit to a new Red Robin location in our area, our party of three kids and two adults was ushered through a doorway to a spacious corner booth. After we’d ordered, and the kids were hovering intently over a cellphone playing some game, I glanced up and noticed a colorful, whimsical piece of art on the wall. It was a pop-art-style piece ... made out of crayons. Above my head was another work of an American flag constructed out of red, white and blue baseballs (that I’d seen before in other locations). I scanned the room for other artwork, and noted to myself that there sure seemed to be a lot of parties with children in this part of the restaurant. 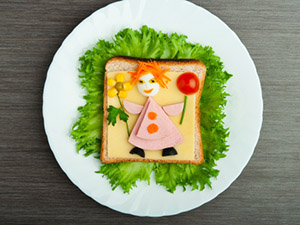 At first, I had that feeling that you get, as a parent, when you board an airplane and realize that they’ve banished you to the section with all the screaming babies and runny-nose scamps. But that was quickly replaced with a sense of discovery as I realized this was different. While news of Red Robin’s plans for new prototypes was floated a year ago, it was an entirely different thing to experience it, wearing my parent “hat,” with my kids.

Instead of being sentenced to a dark corner near the kitchen while childless groups enjoyed the views near the windows, we were treated to a whole section of the restaurant reserved for families with children. It had its own windows, and its own “family” bathroom (genius). And because it was bright and spacious (I could barely hear the other guests because the seating was well spread out) and had a whimsical yet subtle decor, it was easy to see the thought and care that went into the setup. I wasn’t afraid of disturbing other guests when my son laughed a little too loud; the bar was all the way across the dining room separated by a partition, and the “adults only” part of the floor was completely out of sight.

Our hostess at the restaurant never needed to say, “We’re going to seat you in our kids-only zone” for us to understand it. By not saying that, in fact, I was impressed by the feeling that they just “get me.” They get parents, and that would make me come back again.

I confirmed my assumption when I ran into an executive from Red Robin at a reception during the NRA Show last month. She verified that the zones I observed were, indeed, part of the company’s plan to connect with families while building is adults-only audience at the same time.

It’s a refreshing departure from all of the accounts of restaurants instituting bans on kids or those weighing them (looking at you, Alinea). Even the restaurant in Alberta, Canada that offers a $5 “well-behaved kids” discount has it all wrong.

Assuming children will misbehave and disturb others is starting from the wrong place. I’m not naive enough to think it doesn’t happen. I’ve been in the adults-only party, of course, eyeing “those parents” whose children clearly have never been out in public, much less to a restaurant. Parents have the main responsibility of controlling their brood—or finding a babysitter or another destination if the situation is not a good fit for the kids. And parents who don’t, should not be put off, or at least not surprised, if a manager politely asks them to sit in a quieter corner or leave their stroller at the entrance.

But all children aren’t bad and shouldn’t blindly be treated as such, just as all twenty-something-year-old college students aren’t hard partiers and therefore aren’t banished.

A desire for kids in restaurants to be treated fairly doesn’t mean “family friendly” approach isn’t appreciated. Just the opposite. It makes sense to find ways for families and childless diners to coexist in your restaurant. According to NPD group, families represent $83.7 billion or 20 percent of total restaurant sales. Their visits have dropped across all segments and dayparts, especially in full service, but the economy isn’t solely to blame. Other factors include the restaurant environment, NPD says.”Operators ... need to keep in mind that kids are also an important audience since they have considerable influence on restaurant selections,” Bonnie Riggs, NPD foodservice industry analyst, said in a news release.

Perhaps the best example is one, like Red Robin, that acknowledges that both the kids and the adults—parents or not—deserve to have a good experience and sets about serving all customers, at the expense of none.

For the rebuttal to the kids-in-restaurants debate read, "Keep kids away," by Associate Editor Sara Rush.