When The New York Times published an article back in August about a Starbucks employee’s daily struggle to plan her life around an unpredictable work schedule, the coffee giant took immediate action, changing its companywide scheduling practices, among other things. Now the pressure on operators to offer more schedule certainty for workers has shifted from newspapers to politicians. 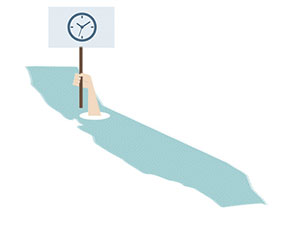 A new mandate, dubbed the Retail Workers Bill of Rights, was passed by the San Francisco Board of Supervisors late last year, requiring operators with 20 or more workers and at least 20 locations to lock in servers’ schedules weeks in advance. Though the legislation is local, its scope could have implications for national chains beyond the West Coast. And it has the potential to turn traditional scheduling, based on the ebb and flow of traffic, on its head. No more sending servers or cooks home on a slow night—not without penalties. Here are the key provisions:

Thus far, San Francisco Mayor Edwin Lee has not signed the bill into law. And the International Franchise Association has come out against the mandate, expressing that it unfairly puts “locally owned franchised businesses at a competitive disadvantage” by not applying the law across the board.

Others argue that it doesn’t take the nature of restaurants into account. “The mandate fails to take into consideration the rapidly changing business environment of restaurants during peak seasons or hours, where changes to schedules are necessary and unavoidable,” says Janna Haynes, communications and public relations manager at the California Restaurant Association. “Weather alone has a significant impact on the ebb and flow of customers and cannot be predicted two weeks in advance … This ordinance has made it more challenging and costlier to run a successful business.”

A statewide version of the law already has been proposed in the California legislature and other jurisdictions are reportedly studying it.