A week full of big ideas. Howard Schultz tells D.C. he’d like a double half cap economy with extra foam and less partisanship. A D.C. restaurant puts a contract out on its customers. Chipotle scores twice with big branding ideas. And the power of Twitter shines through. 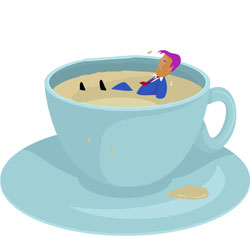 Idea #1: Cut off the spigot. Starbucks CEO Howard Schultz is placing his order with D.C.—get serious about the economy or get no more money from him. And he’s recruiting other CEOs to join him. "I am asking that all of us forgo political contributions until the Congress and the President return to Washington and deliver a fiscally, disciplined long term debt and deficit plan to the American people," Schultz wrote in a letter that was passed to members of the NYSE and Nasdaq. Could Shultz bring new life to the nascent Coffee Party?

Idea #2: Customers are heathens. And must be kept in line with a two-page contract. Want a reservation at RJ Cooper’s new D.C. restaurant Rogue 24? Gotta sign the contract, which stipulates among other things, no cellphones, no photos, a strict (and expensive) cancellation policy, and you’ve got to list any allergies. If you don’t return the contract within three days of making your reservation? No soup for you!

Idea #3: Throw a festival. Cool marketing strategy: Chipotle is throwing a music, food and “ideas” festival in Chicago in October. Dubbed “Cultivate” the one-day party will be a big branding opportunity for the burrito chain. “We’re bringing together farmers, chefs, thought leaders, artisans and musicians on a journey that not only celebrates wholesome food, but that also champions the like-minded people who share our vision to create a better food supply and a more sustainable future,” says Chipotle CEO and founder Steve Ells.

Idea #4: Post ingredients—and respond to tweets. Keeping with Chipotle, a small tweet-troversy erupted recently when a vegetarian Chipotle customer posted his shock at learning—after eating there for years—that the chain’s pinto beans were made with bacon. And just to show why Chipotle is so hot these days: within two hours the tweeter got a call from Steve Ells telling him new menu boards would be installed informing customers that the beans are made with bacon.

Idea #5: Continue to respond to tweets. Peter Shankman is a social media entrepreneur. He has started a number of tech companies, including, most recently, Haro, a service that connects reporters and bloggers with sources via social media. Last week Shankman had a really busy day of traveling. Joking he tweeted, “Hey @Mortons - can you meet me at newark airport with a porterhouse when I land in two hours? K, thanks. :).” Morton’s saw a big pr opportunity and jumped at it. When Shankman landed, the Morton’s 25 miles away was waiting for him with a full meal on the house.