The industry was cool on the idea front this week. But there were still standouts. San Francisco had the no-brainer idea of banning nudity in restaurants. A South Carolina Chik-fil-A fought crime with chicken. And a couple of Domino’s Pizza managers had a really bad idea in Florida. 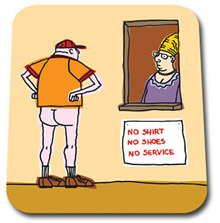 Idea #1: No more butts in seats. We consider ourselves pretty libertarian at the Week in Ideas. But we have to applaud San Francisco Board of Supervisors for taking away a freedom within the city. From now on, no public nudity at restaurants.

Idea #2: Free chicken for a cow. Thieves in Anderson, S.C., stole a topiary of a cow from in front of  a local Chik-fil-A. Pulling out the big guns, the store has offered a year of free chicken for the cow’s return.

Idea #3: Take competition too far. Two managers of a Domino's Pizza restaurant in Lake City, Florida, have been charged with burning down a local Papa John's. Why? One of the men admitted to police that he believed with his competitor out of the way, he would sell more pizza. As we’ve said before, we just report the ideas, we’ve never said they are good ideas.