As an entrant into the booming fast-casual segment, LYFE Kitchen brings some serious culinary cred to the table, but it’s also rapidly becoming a standard-bearer for a whole new definition of “health food.” 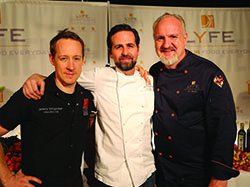 The fact that the menu is also the result of an unusual collaboration between three high-powered chefs—each of whom has his own reason for being interested in healthy food—makes the result all the more remarkable.

“At LYFE Kitchen, we’re creating food for everybody, but it’s transformational in the sense that we’re getting people to think about their food in a completely different way,” says Smith, whose own experience losing 100 pounds through diet and exercise changed his life and views about food forever. “We’re showing our customers that healthy food doesn’t have to be boring.”

Vegan chef and cookbook author Tal Ronnen signed on next. He had teamed up with Smith in 2008 to create a 21-day, plant-based diet for Winfrey and had also helped to create Gardein, a plant-based protein that is in wide use at LYFE Kitchen.

“Trying to create food that’s intriguing for all diners, not just vegetarian and vegan and gluten-free items, is a great challenge, especially since the nutritional parameters are pretty tight,” say Ronnen, who just opened a Mediterranean specialty restaurant called Crossroads, in West Hollywood, California, that “happens to be vegan,” as he puts it. “I like the fact that people want to try this food and then realize that plant-based food is not only healthy, but also delicious.”

Together they recruited Jeremy Bringardner as corporate executive chef, with responsibility for making the team’s ideas work in a fast-paced chain environment. A Johnson & Wales grad who has worked with Charlie Trotter, Bill Kim and Jean Joho, Bringardner has always been aware of the way healthy, nutritious food can make your body feel great, but he often found himself the only person in the kitchen who believed that it could also be packed with satisfaction and flavor.

"Working in collaboration with two other chefs who have very different backgrounds has been pretty amazing,” says Bringardner, who has been a vegetarian for the past few years. “It’s completely changed the way I approach food, and I think we’ve all really stepped up our game to create this menu.” In scaling up recipes and figuring out how to simplify ideas to eliminate not only extra calories and sodium but also extra production steps, Bringardner often gets an assist from Stephen Ford, a chef and nutritional scientist who develops LYFE’s retail line of products.

Together, they hoped to create game-changing, better-for-you recipes for what Larry Taylor, vp of franchise, operations and systems, who put together the equipment package, describes as a “fast-casual service model serving borderline fine-dining quality at a casual-dining price point.”

Or, more simply, “fresh casual,” with menu positioning that calls for the brand to:

Taken together, these parameters amount to a gold standard for the direction in which healthy restaurant dining is evolving.

Art Smith began by leading his colleagues on a “yearlong taste quest,” according to chief brand officer Mike Donahue, first sampling an array of spices, herbs, vegetables and other ingredients in his home kitchen to facilitate brainstorming and ideation.

Later, the team moved to a warehouse with a mocked-up LYFE “heart of the house”—from equipment like a Combi-Oven and pizza oven to replica production stations—so that recipe concepts could be tested in an actual foodservice environment.

As part of the development process, individual recipes underwent three layers of nutritional analysis: “eyeballing” by the R&D crew; initial evaluation by LYFE’S registered dietitian; and final confirmation by a third-party professional lab.

A kitchen that would do credit to any full-service restaurant and a commitment to hiring and training cooking staff with a higher-than-average skill level are part of the concept. Unlike a typical assembly-oriented fast-food kitchen, LYFE has five full stations—pizza, pantry, sauté, broiler, and a “quarterback” who combines proteins, vegetables and other components of the actual build—plus an expeditor who garnishes the plates and calls them out to servers, along with the name of the guest who will be receiving the order. Having the server able to address the patron by name when delivering the order is a point of service that is at the heart of the LYFE model.

Further underscoring the commitment to its food, the company has recently decided to hire back-of-the-house managers with culinary training, rather than the operations-oriented kitchen managers who more typically supervise chain restaurant food production.

The Challenge: Modify Art Smith’s original recipe for a healthier version of fried chicken, so that it could be scratch-cooked within the 10-minute service window and served with interesting vegetables.

The Original Idea: Smith’s version called for marinating bone-in chicken in buttermilk and Tabasco overnight, then doing a “shake-and-bake” with a rustic breading of crushed Swedish-style crackers.

The R&D: Bringardner worked with Smith on a boneless breast that can be marinated and breaded in batch sizes of 90 portions—about a days’ worth. The Tabasco was removed to reduce sodium, and a more affordable and efficient breading was developed consisting of whole wheat panko crumbs, a house spice blend (now commercialized) and grated Parmesan (the cheese replaces the salt flavor more effectively, because it is on the surface of the product, not in a marinade). The breast is sprayed with pan spray before cooking.

The Refinements: In an early version, the chicken was cooked in a microwave-convection oven but the LYFE team wanted to minimize the use of microwaves and found that a Combi-Oven produced a crisper coating and moister interior, with a shorter cook time (5 minutes). A bit of Ronnen’s cashew cream— raw cashews soaked in filtered water and then blended at high speed—adds richness as a bed for the plated chicken. Early on, brainstorming with Ronnen established the accompaniment of roasted Brussels sprouts and butternut squash, which could be prepped ahead. Dried cranberries were added later for a burst of acidity and color, along with fresh herbs for flavor. The aha! moment arrived when the search for a sauce with what few calories were still left resulted in a sprightly Dijon vinaigrette; when it’s drizzled on the hot vegetables, aroma and flavor are released for the wow factor.

The Result: The #2 seller on the menu; a vegan version made with Gardein is also available.

The Challenge: Create a vividly green, extremely nutritious beverage that would appeal to the health contingent as well as the pleasure one; out on initial dine-arounds, Bringardner saw many green drinks, and knew LYFE had to have one.

The Original Idea: The “drinkable salad” would provide a blast of nutrition that’s also delicious and broadly appealing. Bringardner immediately thought of kale for its powerhouse of vitamins, fiber and other nutrients, as well as its green color, and a frozen banana to add creamy body and chilly temperature without having to use ice or dairy.

The R&D: Bringardner discovered that apple juice provided a less muddy-tasting result than orange juice and allowed the kale and banana flavors to shine through, without excessive sweetness. Further benchwork resulted in a base of apple juice plus lemon and ginger, which added enough acidity and bite to mask the inherent bitterness of the kale.

The Refinements: The drink still needed another dimension; Bringardner hit upon frozen cucumber, which elevates the frozen aspect while keeping the flavors in balance—maintaining a vegetal profile rather than a generically sweet one. The mise en place for each blended-to-order drink consists of a base of apple and lemon juice, two-thirds of a frozen banana and a 2-oz. chunk of frozen cucumber, plus a 5g piece of frozen ginger. A cup of raw shredded kale is added at the end.

The Result: An attention-getting bright green drink-cum-meal-replacement that packs in nutrition, yet doesn’t scare off the vegetable-wary. Now a beet-vanilla smoothie is in test.

The Challenge: Create a vegan variation of the popular pizza-like category player, which would serve not only as a platform for seasonal vegetables but also as a versatile item that could be an accompaniment, shareable, appetizer/side and lower price point entrée—and appeal to non-vegans as well.

The Original Idea: The handmade whole wheat crust used for the conventional flatbreads could be used as-is (a gluten-free version made with egg, brown rice, tapioca and potato flours was also developed), but the search was on for a vegan cheese alternative that would have the right flavor, mouthfeel and melt to underpin a rotating array of vegetable toppings, ranging from winter’s shishito peppers and broccolini to summertime grilled asparagus, heirloom tomatoes and basil.

The R&D: Dubious about finding the right “false cheese” that would carry flavor and lubricate the mouth, the team first experimented with vegetable purees and a secondary sauce. As the seasons (and vegetables) advanced and the chefs learned more about the project, they turned to a commercially made tofu ricotta. “It was good and people were happy, but we knew we could do better,” says Bringardner.

Ronnen had been experimenting with pureeing tofu to create a vegan version of ricotta. Further testing resulted in a product the chefs nicknamed “tartufo”: tofu pureed with a little extra virgin olive oil, truffle oil and garlic, which provided tremendous creaminess and flavor that was indistinguishable from the real thing in the context of the flatbread. A dash of cashew cream-sherry sauce (a base product created in the style of a béchamel with shallots, wine reduction and cashew cream) added richness and balanced flavor nuances.

The Iterations: The original whole wheat crust was made from dough balls, which were sheeted, flattened, shaped by hand and parbaked in-house—creating massive problems with consistency, and worries about scaleability as LYFE expands. The decision to commercialize the crust uncovered a source already making a similar product, and who will now provide a hand-formed frozen crust that can be slacked off and topped in-house. The manufacturer is also working on a topping of ground cumin, coriander, and flax seed (whole for fiber, texture and looks, and ground for bio-availability of Omegas) that has always been part of the recipe.

The Result: A delicious and wildly popular flatbread that most fans don’t even realize is vegan.

What else is healthy | How other chains see it