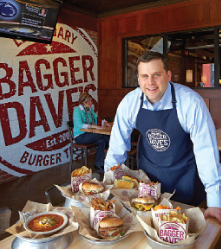 Poster Child: HMSHost, Bethesda, Maryland
Thanks to HMSHost, killing time at the airport has gotten more enjoyable and decidedly more delicious. A subsidiary of Milan, Italy-based Autogrill S.p.A, the company, headquartered in Bethesda, Maryland, is a leader in travel restaurants and retail with $2.5 billion in 2010 sales. It was the first to introduce brands into airport and travel plaza environments some 30 years ago. The company’s approach combines development of proprietary branded concepts, including Cheers, FOX Sports Sky Box, Jose Cuervo Tequileria, Casa Bacardi and Dewar’s Clubhouse, with licensing and franchising of popular international, national and, increasingly, local brands.

HMSHost works with nearly 400 licensed and franchised food and beverage brands in about 1,150 locations and opens an average of 50 new restaurants at airports across the country per year. Franchised brands include Chili’s, California Pizza Kitchen, Tim Horton’s and On the Border. Licensed brands, which make up 80 percent of the portfolio, include national names like Pei Wei Asian Diner, Shula’s and Pinkberry, as well as local brands like 42nd St. Oyster Bar in Raleigh-Durham, Esquire Grill and Burgers & Brew in Sacramento, and Anthony’s Seafood in Seattle.

To manage it all, the company employs a team of six in its restaurant portfolio group who work to build and maintain relationships with restaurants across North America. In addition, its design and construction team works with brand partners to create restaurant designs that meet the brands’ requirements while managing often-challenging space constraints and airport design standards. “We’ve been working with some restaurant partners for 25 years; other relationships are brand new, such as the group we’re working with at Sky Harbor Airport in Phoenix. There, we’re adding 20 local restaurant names into the dining options that will open in mid-2012,” says Bill Casey, vice president of the restaurant portfolio group. “We also travel the country to keep our fingers on the pulse of the latest trends in flavors, food and dining. This enables us to stay on-trend in our offerings.”

Among the biggest challenges and keys to “super zee” success is maintaining brand integrity and consistency, particularly in nontraditional settings, Casey notes. “We work very closely with our partners to ensure that they’re satisfied with how their restaurant is represented in the airport setting. These elements include maintaining customer service, the look and feel of the restaurant, the matching—as closely as possible—of the menu items being offered. We focus on operations and execution and on keeping the brands’ essence pure from street side to air side. We want the customer’s experience to be a seamless one.”

The Career Changer
Characteristics: Started franchising restaurants after first pursuing careers in other industries; incorporate experiences/lessons learned from outside the industry to their restaurant companies; have to be prepared to invest in expertise they don’t have in order to grow

Poster Child:  Aziz Hashim, National Restaurant Development, Inc.
Partly due to flawed career guidance counseling and partly to a knack for computers, Aziz Hashim set out to be an electrical engineer. He worked hard to earn his degree and land a plumb position at Rockwell International. Life was good–until his first day on the job. Looking around at what he describes as a “warehouse of cubicles,” he had a quick and certain change of heart. Three months later, he resigned.

Hashim had worked at Burger King during, working his way up from mopping floors to managing. “It got me through school, but wasn’t anything I thought much about,” he says. After Rockwell, he spent several years in other entrepreneurial enterprises, including his family’s auto repair business and as a c-store owner. “I was getting a taste of business ownership, but the passion wasn’t there,” he says. “It wasn’t until I tried my hand at QSR that everything clicked.”

Today, Hashim is president and ceo of National Restaurant Development (NRD) Holdings, LLC, which he founded in Atlanta in 1996. Starting with one KFC unit he grew to 13 KFCs in the Atlanta market before unloading them. The company’s portfolio now consists of more than 58 units, including Popeyes Louisiana Kitchen, Checkers/Rally’s Drive-Ins and Domino’s Pizza brands, as well as four Canada-based PetValu units. The latter were added last March as a way of testing international waters.

While engineering might seem a completely different skill set than foodservice, that background has served Hashim well. “Detailed planning and analyses are critical in engineering. You have to be very disciplined about what you’re going to build and how you’re going to build it. You have hundreds of people working on a project. No one electrical engineer’s going to build a computer: It’s built by 50 different types of engineers—the memory guy, the modem guy, etc. I took the same approach to my business, investing in infrastructure and in people with skills that I don’t have.”

Has he ever looked back? “Never,” he says. “I’ve loved every minute of it.”

The Franchisee-Franchisor
Characteristics: Works both sides of the equation, matching concepts to opportunities whether a proprietary brand or someone else’s; often begins as franchisee and later becomes franchisor; leverages relationships gained as franchisee to build own franchise; clearly understands and empathizes with own franchisees’ issues and challenges; must balance leveraging common opportunities and resources with separation of church and state.

Poster Child: Michael Ansley, Diversified Restaurant Holdings, Inc.
A successful Buffalo Wild Wings (BWW) franchisee for the past 15 years, Michael Ansley has the franchisee side of the business down pat. His Diversified Restaurant Holdings (DRH), established in 1998 in Southfield, Michigan, operates 22 BWW units in Michigan and Florida and has agreements in place to do 16 more. Ansley was the first in the BWW system to introduce a full-service unit; it led the chain in sales from 2003 through 2006.

Currently at six company stores in Michigan, RDH sold its first six-unit franchise development agreement to Bill Zellmer, also a BWW franchisee. Zellmer and partner Lonnie Griggs will open their first unit in March in Cape Girardeau, Missouri, with more to follow. “Hopefully, we’ll get a couple more area development agreements signed, and we’ve created some incentives to help take on some of the risk for franchisees,” says Ansley. “We’re also going to open at least five company-owned units next year.”

On going his own way, Ansley says he first considered franchising another concept as a way to grow. He even turned down a 50-store Five Guy’s development agreement in Michigan. “I wanted to try something on my own,” he says. “It’s rewarding, it’s good for our people and for our company. We’re a closely held public company and having our own brand makes us a lot more valuable to investors.”

Over the past 18 months, RDH has made significant additions to its management team to gear up for its foray into franchising. Ansley has brought on well-seasoned executives in finance, purchasing and franchise development, for instance. “It’s been like trying to build a top-performing pro sports team with a salary cap,” he says. “But we’ve got a great team.”

Buffalo Wild Wings, he adds, has been very supportive and his status as a franchisee there has help grease some wheels as he’s prepared Bagger Dave’s for growth. “We’ve been able to leverage a couple of contracts early on with their cooperation. Certainly, it gives us a lot of credibility with suppliers that we’re a BWW franchisee. We use the same distributor, so we’re able to leverage that relationship, as well,” he says.