Four luminaries of the restaurant and food industries took the stage at a Culinary Institute of America event last week to share their culinary philosophies and formulas for success. The quartet—Rick Bayless, Cliff Pleau, Daniel Humm and Walter Robb—was there to be honored with a 2013 Augie Leadership Award, a CIA honor now in its seventh year. 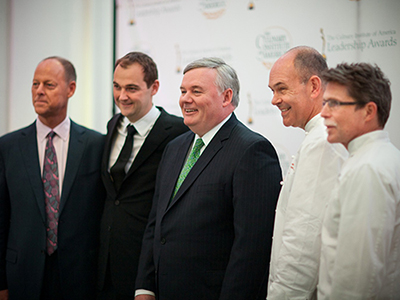 They hailed from decidedly different areas of the food world:  Bayless is chef-owner of the acclaimed Frontera Grill, Topolobampo and XOCO restaurants in Chicago; Pleau is corporate executive chef for Darden Restaurants’ Seasons 52 chain; Humm is executive chef of the New York fine-dining restaurant Eleven Madison Park and the NoMad Hotel; and Robb is co-CEO of the Whole Foods supermarket chain. But Dr. Tim Ryan, CIA president and moderator, was able to tease out common values, passions and goals from the panelists around the theme “Food Matters.”

Tim Ryan: What has guided you from the beginning?

Walter Robb: I’ve always been a passionate follower of the natural food movement and sustainability, and in my current role, I oversee purchasing, marketing, distribution and quality standards. Eating is an ethical act; I love talking about food and ethics in the same sentence.

Rick Bayless: Although I started out as an anthropologist, I always thought cooking was the best way to express culture. While pursuing my doctorate, Latin flavors captured my imagination and Mexican food became a passion. So I changed direction and became a chef.

Daniel Humm: When I arrived in America from Switzerland 10 years ago, I came with two suitcases and no English. My first job in the U.S. was as head chef at Campton Place in San Francisco. Then I was hired to work with Danny Meyer’s Union Square Hospitality Group at Eleven Madison Park. I now own this restaurant and NoMad; my goal remains to create fine dining for the next generation.

Cliff Pleau: Ever since I graduated from the CIA, I only pursued jobs at five-star hotels and restaurants and I was never out of work for more than 24 hours. That was great training for Seasons 52—I focus on technique, fresh, quality ingredients and ambiance. It’s about being seasonal first, and “it happens to be good for you” second.

TR: All of you took risks along the way. What are your thoughts on risk-taking?

DH: The most important thing is to do what’s in your heart and what you really believe in. That’s the only way you can be successful. We take what we do seriously but we don’t take ourselves very seriously. That thinking helps us adapt.

WR: The flip side of risk is courage. At Whole Foods, it takes acts of courage to adhere to animal welfare standards, seafood standards, GMO labeling. But 100 percent transparency helps [consumers] make the right choices.

TR: What challenges are on the horizon?

WR: Quality of water, quality of land and quality of life for farm workers are the next issues we’re dealing with.

RB: I’m always discovering something new in Mexico…new ingredients, new techniques, new flavors. I would like to trace every vegetable in the Mexico City outdoor market and find ways to use it.

CP: My biggest challenge is bridging the knowing/doing gap.

TR: How are you and your concept evolving?

DH: Collaboration is very important to evolving our menu and moving Eleven Madison Park from a brasserie to what it is today. We have a team of eight people involved in the creative process on a weekly basis and three dedicated to R&D. But inspiration can come from the lowliest cook on up. We have 14 different nationalities working in the kitchen and our collaborative style builds commitment by giving employees ownership of certain dishes.

RB: We originally had a vision that we could win people over with flavor. At first, customers were disappointed that we didn’t have tacos or burritos in a Mexican restaurant, but people grew to appreciate the authenticity of the menu. Diners have come a long way and so have we.

CP: At Seasons 52, our wine program and ambiance are the stable pillars, but the food has to constantly change. As we grow, we’re doing more partnering with farmers and small producers to supply ingredients and enrich our farm-to-table menu. We now have 31 restaurants and are building eight to 10 units per year. Customers in different parts of the country are looking for different things. For example, people are sensitive to the menu verbiage; some like it and some don’t. And Millennials eat differently. They are more concerned that food is hormone-free, and less concerned that an entrée comes in at 475 calories.

TR: How are you reaching out to local farmers?

RB: In Mexico, the areas that have the best cuisine also have the most diverse agriculture. I tried to replicate that around the Chicago area. I began by lending one farmer money to build a hoop house to grow spinach. It was the best spinach I ever tasted. In return, I got all his spinach for my restaurants. To be a successful restaurant in Chicago, you have to put farm names on the menu. We gradually expanded the program to offer other farmers interest-free loans that could be paid back in a year. This has now evolved into a foundation.

TR: What makes you happy?

DH: I love to be at the restaurant, but balance is important, too. I balance my time at Eleven Madison Park with time devoted to family and sports. I truly enjoy doing what I do; I’m happy but always looking for more. I still feel like I’ve only scratched the surface.