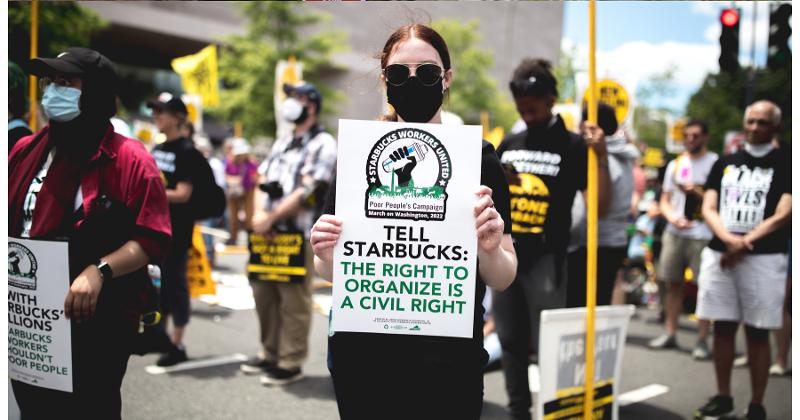 Efforts to hammer out labor contracts between Starbucks and its newly unionized employees have already broken down because of a dispute over the form of the meetings.

The union representing the workers wants to patch in members from remote locations via Zoom for the negotiations, while Starbucks is insisting on face-to-face meetings, citing federal regulations that validate its position.

The coffee giant filed five complaints with federal regulators against the Starbucks Workers Union, or SWU, after the labor group teleconferenced in members of its national bargaining committee from around the country.

The SWU said it had indications from Starbucks that a mix of in-person and beamed-in participation was acceptable. But five minutes into the hybrid meeting, Starbucks representatives stormed out of the room in the Buffalo, N.Y., location where the parties had gathered, according to the SWU.

Counterparts in four other locations then halted their discussions with union representatives, the SWU asserts.

The SWU quickly issued a press release that portrayed Starbucks as being irrational and capricious. “It’s as if Starbucks walked out of negotiations because they didn’t like the color of our hair,” Al Kerr, a worker at a Starbucks in Buffalo and a member of the bargaining team, said in the press statement.

Starbucks has countered that rules set by the National Labor Relations Board, the federal government’s unionization watchdog, expressly prohibits participants in a contract negotiation from videotaping or providing a transcript of the give-and-take. The rule is intended to ensure the negotiators can bargain openly, frankly and in complete confidence.

“Broadcasting or recording these in-person sessions is deeply concerning and undermines the interests of our partners because negotiations may warrant the discussion of individuals by name and are likely to address a range of sensitive topics,” the company said in a blog entry posted on its labor-focused website, one.starbucks.com.

The post asserts that Starbucks representatives never left the five meetings, but rather stood by to see if SWU representatives would respond to the company’s objections and limit the negotiating sessions to in-person participants.

Starbucks acknowledged that it had agreed in the past to virtual meetings with SWU representatives, but only because the threat of COVID had been high. And it insists that the union had agreed to meet exclusively face-to-face in the 40 negotiating sessions that had been scheduled for Oct. 24 through Nov. 10.

Each of those conferences would focus on a labor contract for a single Starbucks store. The company anticipates that it foresees holding at least 200 such meetings. It’s not clear why that number is not 250, or the tally of units where employees have agreed to join the SWU.

The SWU noted in its press materials that the Buffalo store where negotiations were halted had voted to unionize five months ago.

The other locations where negotiations were halted are Chicago; Ann Arbor, Mich.; Louisville, Ky.; and Long Beach, Calif.