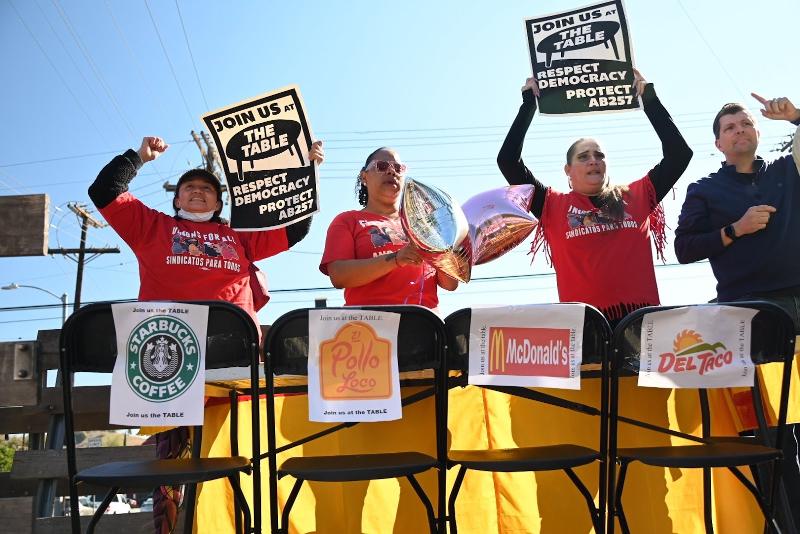 Fast food workers rallied in Sacramento Tuesday. / Photo courtesy of Fight for $15 and a Union.

Riley Lagesen, chair of law firm Greenberg Traurig’s global restaurant industry group, asked the crowded ballroom at the Restaurant Finance and Development Conference on Tuesday for a show of hands. Who operates in California?

So was the mood, at least at a session covering the Fast Act, California’s controversial law that will give workers and union representatives a voice in the regulation of the fast food industry, including setting wages that could potentially increase to $22 per hour. California Gov. Gavin Newsom signed the Fast Act into law on Labor Day this year.

The message to those gathered for the annual conference hosted by Restaurant Finance Monitor in Las Vegas on Tuesday, however, was an open appeal by the International Franchise Association and the National Restaurant Association to urge attendees to join in the battle to stop what they described as a growing labor movement from spreading.

If not stopped, the Fast Act will not be limited to California, or even be limited to the fast-food industry, Lagesen contended. Other states are already starting to look at similar legislation.

“It’s a coordinated and union-backed strategy to change the American labor landscape,” he said.

Meanwhile, in the California capital of Sacramento on Tuesday, fast-food workers organized by Fight for $15 and a Union delivered a petition signed by thousands of workers across the state calling for the creation of the Fast Food Council under Assembly Bill 257, known as the Fast Act. Fight for $15 said the petition was signed by nearly 20,000, which is double what the statute requires to create a council, though state officials will not count the signatures until January, when the law is scheduled to go into effect.

However, chain restaurants are pouring millions into an effort to gather signatures to put an initiative on the 2024 ballot in California to ask voters if they want to keep the legislation. With enough signatures, implementation of the new law could be put on hold until the 2024 ballot vote, said Kennedy.

“We feel very comfortable, very confident that we’re on track to collect those signatures,” said Kennedy at the RFDC conference. “But we’re not putting the champagne on ice just yet.”

There’s work to be done, not only in California but in other states where the rise of unionization is taking hold, the two association executive said.

Vulnerable states include those with Democratic governors, which, following the mid-term election last week, now includes Arizona, Maryland and Massachusetts. The governorship in Nevada flipped red, however.

“But this isn’t something you can throw money at,” said Kennedy. “We need bodies, restaurant owner and franchisees, who will join in pushing back on this legislation.”

This is not your father’s labor movement, he added. In the old days, workers would “protest and bang pots and pans” outside workplaces. Today, efforts are more internal, with workers seeking a seat at the table. Younger workers, in particular, may not really understand what it means to be involved in a labor movement.

International Franchise Association Senior Vice President of Government Affairs Michael Layman called for “being proactive way in advance” in the states where the seeds of a Fast Act could grow by “conditioning the environment to really sell the franchise model as important for growth.”

The good news is that the public loves restaurants more than ever, especially younger consumers, said Lagesen.

“So stay informed. Get active. Educate others. Be vigilant,” said Lagesen. “Don’t fall asleep on this because it’s not going to go away.”

CORRECTION: This story has been updated to correct a quote attribution.