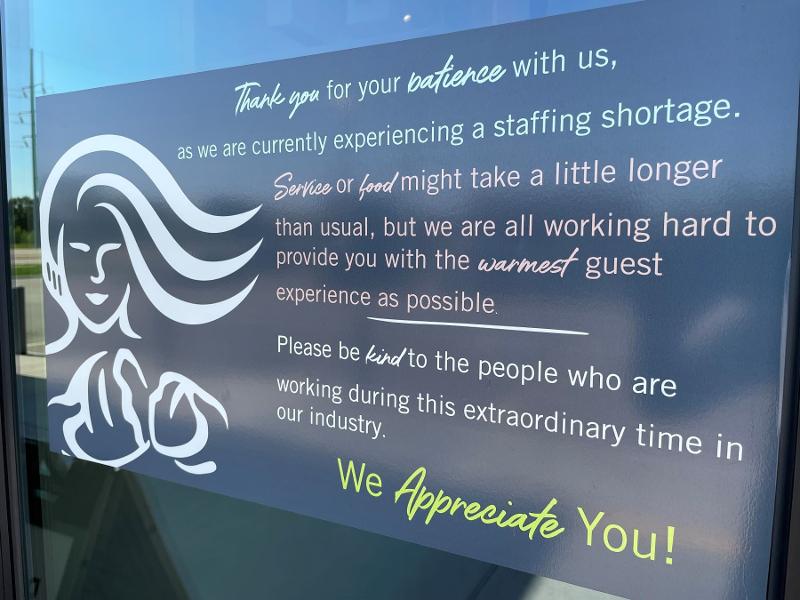 A Panera Bread in Minnesota warns customers that it is short workers./Photo by Jonathan Maze

Bubbalou’s Bodacious Bar-B-Que, a small four-location chain in Florida, closed the doors of its location in Winter Park earlier this month. In a Facebook post, the company said the reason was simple: It can’t find enough people.

“Business has been off considerably,” the company said in a Facebook post. “But the hardest part being the inability to find staff to hire. Despite paying more than any restaurant I am aware of, no one wants to work.”

Such stories have been playing out throughout the U.S. Despite an end to extra unemployment benefits, restaurants around the country are either closing dining rooms or reducing hours or closing for days at a time because they can’t get enough employees.

While the industry cut 41,500 jobs last month, there remains an abnormally high number of job openings. According to the most recent federal data, 10.8% of leisure and hospitality jobs were open in July, up from 10.2% in June. The “quit rate” for accommodation and food service jobs, meanwhile, was 5.4% in July, which was down slightly from June.

Both numbers were higher than every other industry. The result has been a restaurant industry struggling to cope with strong overall demand for their business and a lack of workers available to meet that demand.

We’ve compiled some tales of shortened hours and reduced services—or closed restaurants—from social media reports and our own observations.

What customers are experiencing

I’m sitting at a Jimmy John’s waiting for my lunch order. A number of people are waiting along with me. The store is short staffed. Even online orders are waiting.

Odd situation for a company that prides itself on speed. But the same situation is playing out everywhere.

Pre-ordered meals for some little leaguers. Currently sixth in line, going on about thirty minutes. Can't help but feel sorry for the overworked kids behind that counter. 😔 pic.twitter.com/qjwmlPdJh2

In my area most of the dominos pizza units don’t even deliver anymore and pick up only.

We went out for dinner a couple of weeks ago. They told us at the door they were short staffed and the meal would take around 90 minutes. The waiter mixed our drinks. We tipped him well because he’s choosing to work instead of taking free money.

Yeah I had to cancel my @ChickfilA app order today because the line was insanely long, not moving, and you could only drive thru. Hard to find workers I guess! 🤷🏻‍♀️

@jonathanmaze just walked by Noodles & Company, this was on the door pic.twitter.com/Ns3baZn3hS