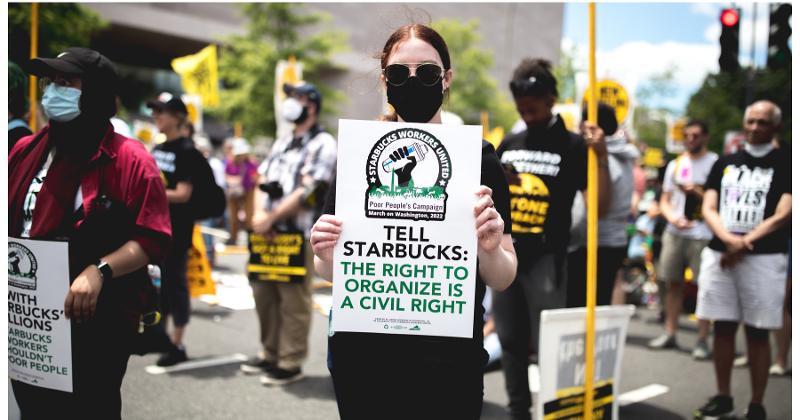 Starbucks has accused the federal agency that monitors union elections of violating its own fairness standards by helping baristas to vote in a union, as they’ve now done at 216 units.

The chain has asked the National Labor Relations Board (NLRB) to halt mail-in voting, the balloting method that was allegedly corrupted, until the assertions can be investigated.

According to the chain, the NLRB has violated its neutrality in the elections by such actions as…

The NLRB was also accused of trying to cover up the wrongdoings once they came to light. Starbucks referred to the actions as “misconduct” rather than outright illegal activity.

Chain headquarters said it learned of the irregularities from “a career NLRB professional” who reported seeing proof of the NLRB’s pro-union bias during a drive to organize a Starbucks store in Overland Park, Kan.

In a 16-page letter sent Monday to the NLRB’s chairman and general counsel, Starbucks General Counsel Zabrina Jenkins and outside counsel Kimberly Doud said that the anonymous whistleblower knew of documents that could prove the allegations.

“Until a thorough investigation is conducted it’s anyone’s guess how many elections in how many other regions have been similarly infected,” they wrote.

A copy of the letter was obtained by Restaurant Business.

Starbucks staffs have voted not to unionize in only 46 of the 262 union elections that have been held to date in its stores, or about 18%.

Asked for a response to Starbucks’ allegations of misconduct, NLRB Director and Press Secretary Kayla Blado said the regulatory body does not comment on open cases.

“The agency has well-established processes to raise challenges regarding the handling of both election matters and unfair labor practice cases,” she continued. “The regional staff – and, ultimately, the Board – will carefully and objectively consider any challenges raised through these established channels, which include opportunities to seek expedited review in both representation and unfair labor practice cases.”

Starbucks and the union being formed by its employees, Starbucks Workers United, have been trading accusations of misconduct and union-rule violations almost since the staffs of three upstate New York units kicked off the organization drive a year ago. Some of the union’s complaints have prompted the NLRB to escalate the back-and-forth to administrative courts, without sanctions being handed down.

The coffee chain has lately been more aggressive in dealing with the unionization attempts. Recently, for instance, it denied a pay increase to units that had voted to organize, saying the raise had not been cleared with the employees’ union representatives.

Headquarters also announced that it would permanently close 16 stores because it could not guarantee the safety of baristas in those units.