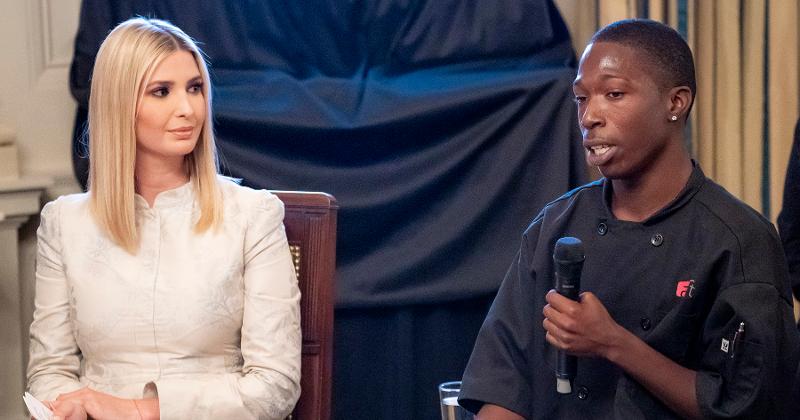 As lead breakfast cook at the Aloft Hotel in Orlando, Fla., Johnny Brummit is no stranger to stress. Every morning brings a swarm of sleepy-eyed guests who expect him to rev them up with quality meals prepared in a flash. But that standard operating anxiety is nothing compared to the jitters he felt in retelling his climb to that career rung at age 19 from a sometimes troubled childhood in the projects of Orlando. His listeners were a father and daughter by the name of Trump, as in Donald and Ivanka, and Brummit’s mission was to help them understand how the hospitality industry can be a springboard for underprivileged youngsters like himself.

Brummit was one of four young industry executives who were recently invited to the White House to celebrate the one-year anniversary of President Trump’s Pledge to America’s Workers, an initiative intended to foster upward mobility through training and vocational-style education. In Brummit’s case, that path was the Culinary Training Program offered by Second Harvest, a food bank devoted to feeding the needy. The charity offers a 16-week kitchen training program in central Florida through a collaboration with the American Hotel & Lodging Educational Foundation (AHLEF), the career development affiliate of the American Hotel & Lodging Association (AHLA).

“I never would have had the chance to do what I’m doing without that opportunity,” Brummit tells Restaurant Business. As a boy, he’d watch his grandmother cook. When she was injured in an accident, Brummit took over the stove to feed his grandfather, trying to recall how his grandmother had handled the pot, pan and burner. A sense of obligation turned into a passion, and by middle school he knew he wanted to cook for a living.

But opportunity didn’t keep up with desire. Looking for a pathway, a high school-aged Brummit figured he'd enroll post-graduation in a local branch of Le Cordon Bleu, the well-known culinary school. But it went out of business. There were plenty of other culinary schools he could try, but he lacked  the transportation to get to them. An aunt heard about Second Harvest’s program, which was offered near his home. He could also attend for free. “They even paid for my uniforms,” Brummit says.

The program not only helped Brummit hone his knife and safe food handling skills, but also drilled him in job interviewing through mock interviews. Offers came quickly, and he chose a combination prep cook and dishwasher position at the downtown Aloft because it was near his home. Within months, after mastering such functions as inventory control, he was heading the kitchen during the all-important breakfast shift and prepping the food for Aloft’s grab-and-go outlet.

That was the story Brummit told President Trump and his daughter, technically a special adviser, when he was invited to the White House. “I was actually working one day and I got a call from my instructor at Second Harvest. She told me, 'Something great is coming up,'” he remembers. “She called me back in a couple of weeks: I had an opportunity to speak in the White House in front of President Trump and Ivanka.”

“Of course!” he shoots back. “I just took a deep breath and gave them a speech on my growth and my experiences, how hospitality had benefited me and how it can benefit other people.”

The Trumps tried to put him at ease, Brummit recounts, and Ivanka was particularly gracious. “She spoke with me for about 30 minutes, and she already knew a lot about me,” he says.

He was also treated to a tour of the White House kitchen and a chance to meet the official first chef.

Joining him in the White House were Jaquan Hargis, who works as the culinary steward of the Royal Sonesta Harbor Court Hotel in Baltimore after graduating from the AHLEF’s Baltimore Empowering Youth Project in May; Azeem Bhatti, an employee at the TownePlace Suites in Springfield, Va., who’s about to participate in the AHLA’s apprenticeship program; and Coretta Bradley, who graduated from the AHLEF’s apprenticeship program and now works at Real Hospitality Group.

All were invited as examples of young people who have forged careers without a traditional college education. As a signer of President Trump’s Pledge to America’s Workers, AHLEF has committed to forging alternative paths through apprenticeships and programs like the one that Brummit underwent.

Since his visit to the White House was covered in the general media, Brummit has had to undergo some ribbing from his friends, some of whom now refer to him as "Mr. Hollywood." But he notes that two have asked him how they can follow in his footsteps, and one has already submitted an application to Second Harvest.

What would he tell others from his neighborhood if they were curious about a similar career path? “I’d tell them to go for it,” he says. “Just cooking, period, there are a lot of ways to grow. Your past doesn’t define you.”

Meanwhile, he’s starting to think about the future stops in his career. “Next, I’m going to try to get a business started, a catering business,” says the teen. “If I can’t do that, I would love to be a personal chef.”

*This photograph is provided by THE WHITE HOUSE as a courtesy and may be printed by the subject(s) in the photograph for personal use only. The photograph may not be manipulated in any way and may not otherwise be reproduced, disseminated or broadcast, without the written permission of the White House Photo Office. This photograph may not be used in any commercial or political materials, advertisements, emails, products, promotions that in any way suggests approval or endorsement of the President, the First Family, or the White House.