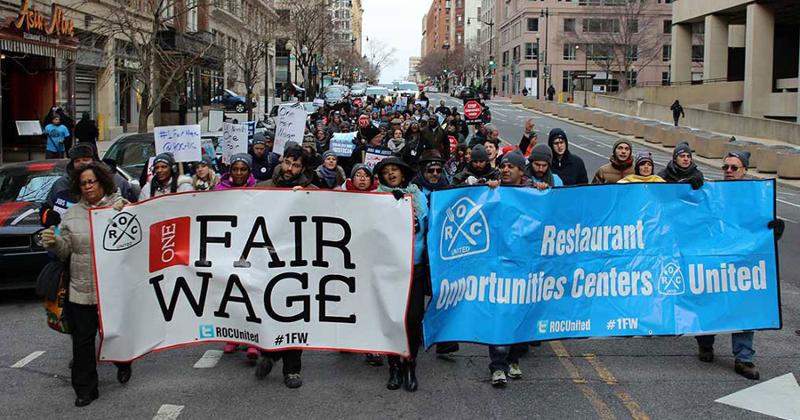 While restaurants were closing or scaling back their operations during the COVID-19 pandemic, proponents for organizing the industry’s workforce were also adjusting to the new realities.

By early May, that meant engineering job actions at branches of McDonald’s, Wendy’s, Domino’s and Chipotle; hosting back-to-back online “demonstrations” with Sens. Elizabeth Warren and Kirsten Gillibrand; convening the biggest-ever Walk Out Wednesday, a standing industry event intended to show labor’s strength; and using a website called ApplebeesIsRotten.com to solicit horror stories about working for Applebee’s and its sister chain, IHOP. And that was just one week.

“We’ve been busier in the last two months than we’ve ever been,” says Teofilo Reyes, director of policy for Restaurant Opportunities Center United (ROC), an advocacy group backed in part by the Service Employees International Union (SEIU).

Many restaurants may have been idled by the pandemic, but the crisis has galvanized the labor groups that for years have urged restaurant employees to band together for more leverage against employers. Observers say the message may have more force today because the advocates are focusing on the protection of employees’ health instead of the usual rallying points of pay and benefits. Their demands on restaurants are as likely to center on protective gear as on higher wages.

“People are fearful,” says Franklin Coley, labor specialist for lobbying and reputation-management firm Align Public Strategies. “Wages and benefits, let’s put that aside. Unions want to organize around worker safety—that’s a better place for them to organize than around wages right now.”

Reyes doesn’t dispute that assessment, though he adds financial breakdown as a front-and-center employee worry. “Our membership has grown significantly in the last two months because people are feeling the issues much more viscerally,” he says.

Focusing on protecting restaurant workers also helps the unions muster the general public’s support for their cause, Coley adds. “There’s general angst about going out in public, and that extends to the employees who are working during the pandemic,” he says. In the public’s mind, why shouldn’t restaurants or other employers protect their workers on the front line?

“Our membership has grown significantly in the last two months because people are feeling the issues much more viscerally.” —Teofilo Reyes, Restaurant Opportunities Center United

The SEIU recently hitched its campaign for a so-called living wage of $15 an hour to a protest of McDonald’s safety protocols for unit-level employees. The union called for a walkout at a San Francisco unit where four employees had tested positive for the coronavirus. A media alert issued to promote the event said employees of the store had filed a formal complaint against the restaurant with the San Francisco Department of Health, alleging among other things that they were directed to use coffee filters as face masks.

"Fast-food workers have stayed in their jobs on the front lines throughout this crisis to keep families fed, including their own," SEIU President Mary Kay Henry said in a statement accompanying the alert. "At every turn, McDonald’s has neglected to provide proper protections and equipment at great risk to the health of workers and the customers they serve.”

The statement went on to call for a federal minimum wage of $15 an hour and double pay for working during the pandemic, the new objective for labor’s long-standing Fight for $15 and a Union campaign.

It also asserted that safety concerns were the impetus behind walkouts and similar actions at McDonald’s restaurants across the country.

“There’s a lot of things we’re advocating for,” says Reyes. “On one hand, restaurant workers are essential workers. So places where they are working and where they’re being called back to work, they need access to PPE [personal protective equipment]. There’s no reason why people need to unduly put themselves and their families at risk.”

He asserts that some restaurant employers have gone as far as prohibiting employees from wearing masks, a flashpoint that he says fed into ROC’s decision to launch ApplebeesIsRotten.com.

The 2-month-old site asks anyone who has worked at an Applebee’s or IHOP to provide an unflattering anecdote about the chains’ performances as employers.

It also asks them to sign a petition that demands the all-franchised chains provide paid sick leave and to email their request directly to the franchisors’ headquarters. The site claims that 500,000 people have done so to date.

That number cannot be accurate, according to a spokesperson for the chains’ parent, Dine Brands Global. She says the company doesn’t receive that many communications—emails and telephone calls—across both its brands in any given year.

The spokesperson says she couldn’t find any record of an incident involving an Applebee’s employee being directed not to wear a mask, and notes that such an action violates the safety rules that were set for franchises and company stores alike.

“Once restaurants began closing due to coronavirus, we ensured we followed federal, state and local guidelines, and quickly established additional precautionary steps to enhance protections for our teams that were operating to-go dining,” the spokersperson says.

“In a lot of areas of the country you’ve had workers on unemployment, in some instances making $15 an hour. That’s a labor-related nightmare. It’s a ripe opportunity for unions.” —Franklin Coley, Align Public Strategies

Reyes stresses that increased worker safety is only one of the objectives during the COVID-19 crisis for groups such as ROC, SEIU and Fight for $15 and a Union. No. 2 on his employer’s list is securing paid sick leave as a permanent benefit.

“We see a lot of restaurants who don’t offer paid sick-leave benefits,” he says. Their employees are “essential workers, but they’re not making the highest wages out there. If they contract the illness and have symptoms, they have a real incentive to continue working to pay their bills.”

ROC would also like to see some sort of rent relief extended to restaurant workers who lost their jobs because their employer shut down or shifted exclusively to takeout and delivery. But it would like to see a rent break extended to small businesses as well, because keeping them in business preserves restaurant jobs.

“We know there’s a lot of pain out there among restaurant operators,” Reyes says.  “We want to see how we can support and help the industry bounce back.”

He disputes the assertions that industry labor advocates are exploiting COVID-19-related fears to pursue their long-standing agendas. Rather, he says, groups like his have been roused into stepped-up action by the particularly severe damage that COVID-19 has done to the industry.

“About 1 in 5 of the people who’ve been laid off works in the restaurant business—about 5.5 million people,” Reyes says.  “There has been a tremendous amount of need.

“Our message hasn’t changed,” he continues. “It really has become more salient.”

Coley of Align Public Strategies notes that unions have a particularly avid audience at the moment because many restaurant workers have been receiving more in government relief than they earned on their jobs.

“This is where the perfect storm comes into play—in a lot of areas of the country you’ve had workers on unemployment, in some instances making $15 an hour,” or what organizers are aiming to secure for them permanently, he says. “That’s a labor-related nightmare. It’s a ripe opportunity for unions.”

The dire conditions have also led to high-profile examples of restaurant staffs being victimized by employers’ greed—"cases where employers haven’t paid them wages due,” Reyes says.

Yet he doesn’t use broad strokes in painting the industry’s transgressions. “We’re seeing both extremes,” Reyes says. “Some employers are engaging in their own efforts to help their staff. But we also see the negative side, too, where workers have not received their last paycheck and we try to get their employer to do the right thing.”

The onetime McDonald’s worker cites Darden Restaurants as a prime example of a restaurant employer deciding to do the right thing for its employees because they need help. Early in the pandemic, before its dining rooms were closed, the parent of Olive Garden and The Capital Grille voluntarily adopted a paid sick-leave policy, with the provision that it would remain in place post-COVID-19. It also formed an emergency fund to help its 90,000 workers to stay afloat.

Reyes also has praise for Caribou Coffee, noting that the chain provides all of its workers with PPE.

“The next step is whether we see employers reach out and hire their former staffs,” he says. “I think they’ll see that their employees will be increasingly loyal.”

Does that signal warmer relations between employer and employee as the crisis eases?

“We’re going to see some changes, depending on how long the crisis lasts in terms of unemployment,” says Reyes. “We might have to operate for a long time with restaurants not being at full capacity. That does concern me.”

And how about unions’ penetration of the industry? Will organizers make permanent gains?

“Maybe,” Coley says after a long pause. “Certainly brands are distracted by other things right now and not focused as much as they would be on this. A lot of them are months away from liquidity problems.

“It’s really up to the brands and the unions.”