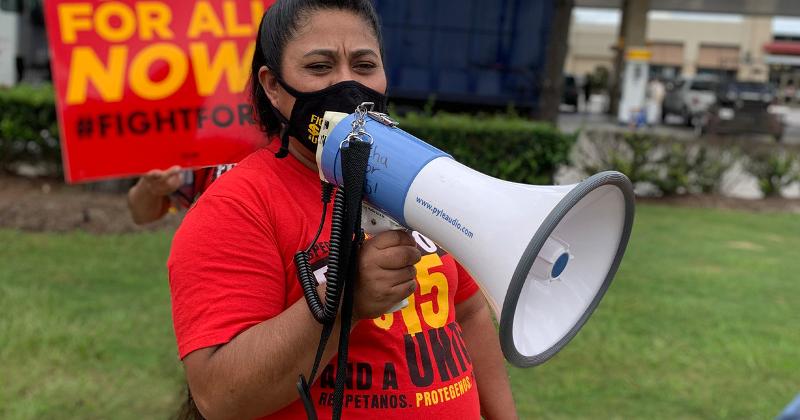 Photograph courtesy of Fight for $15 and a Union.

Raising the federal minimum wage to $15 an hour would lift 1 million Americans out of poverty, according to a study released last year by the Congressional Budget Office, the nonpartisan agency that gauges the financial impact of legislation being considered in Congress. For Gloria Machuca, it’d mean running the air conditioner in her home this summer without worrying about covering her electricity bill.

Machuca has been an employee of a McDonald’s restaurant for 21 years, currently earning $11 an hour as a kitchen worker for two stores. She thinks enough of the job to steer her daughter, the eldest of six children, into working for the brand. But she doesn’t understand why an organization of McDonald’s size won’t pay her enough to make ends meet when she’s been a loyal and hardworking employee for more than two decades.  Why shouldn’t she be able to take her family for a meal at the very place she sustains with her labor?

That, she says, is why she’s an active member of Fight for $15 and a Union, the union-affiliated group that’s pushing for what it’s dubbed a living wage. After all, Machuca said through an interpreter provided by the group, a Fight for $15-led strike against her employer got her a raise from $9.50 to $11 an hour. So she was on the picket line in withering heat on July 20, aiming her demand for a $15 wage at Congress this time instead of the Golden Arches.

Restaurants say they can’t afford to provide wages at the scale Machuca is demanding. They look at their P&Ls and conclude the hit to margins would make their business model unsustainable. Instead of higher pay, employees would end up without a job, a contention supported by the Congressional Budget Office study. It found that a $15 minimum wage would result in 1.4 million to 2.7 million jobs being eliminated across all industries.

But often lost in their calculations is the inability of many restaurant employees to get by on the industry’s current wage scale. Employees working 40 hours per week at the local minimum pay rate are unable to afford a one-bedroom apartment in 95% of U.S. counties, according to an advocacy group called the National Low Income Housing Coalition.

They would need to work 79 hours a week just to cover their rent, the group concluded.

Robbie Cochran works a full shift five days a week at a McDonald’s in Michigan, her employer for the last 11 years. She worked at another restaurant for eight years beforehand. Her current position enables her to start early and get home before the kids arrive home from school. Plus, the unit’s location enables her to get there via bus without a connection.

If her pay was raised to $15 an hour, “my life would change to something better than what it is now,” she continues. “Right now I am struggling. When you get your paycheck, it’s like you don’t even get anything. It’s gone right away. ‘Should I pay the gas bill, or should I get [the kids] something they need?’”

The constant economic pinch, she says, is why she’s joined Fight for $15 pickets and strikes. “I’m not just fighting for myself, I’m fighting for my kids and their kids’ kids.”

Why not join the mass exodus of workers looking for better situations in other fields? “To be honest, I have not had time to look for another job. I work five days a week,” Cochran says.

Restaurant employers say heads of households such as Muchaca and Cochran are far from their typical hires. Far more usual, they contend, are staff members like 18-year-old Abigail, a Midwestern fast-food worker whom Restaurant Business offered not to identify by name to avert any fallout from her employer. She lives at home and is saving her wages to help pay for college and to buy a car.

“I love my job,” she says. “It does get tough when it gets busy. But it’s still fun. There’s always something for you to do. When it’s slow, we stock up the whole store. Even that’s fun to do because we get to organize everything.”

Abigail is paid $12 an hour, or more than what Muchaca and Cochran earn.

“I’m pretty happy with what I get,” says Abigail, who just passed her one-year anniversary at the job, the second she’s ever held. “Considering the hours that I work and the things I’m saving for, it does help.”

Still, if another place offered her $15 an hour, “It would turn my head pretty far,” she says. “I would just double-check to make sure I knew what I was getting into.”

"Not all jobs are meant to support a family,: says Todd Hollander, director of dining services and events for John Knox Village, a retirement community in Lee's Summit, N.J. "Many starting restaurant jobs fall in that category in my mind.  I relate being employed to school.  We do not expect a 5-year-old to be able to handle a 12th grader's work load, let alone college courses.  In a similar fashion, starting positions are meant to give a person job experience and opportunity to learn how to behave in a work place so that they may try different opportunities."

The modern restaurant industry was built on employees like Abigail—high school and college youngsters looking to make a few dollars before moving on to the next station in their lives. But federal figures suggest the industry’s labor pool is changing. The average age of a restaurant worker in 2020 was just under 29, according to the U.S. Bureau of Labor Statistics.

Caught in the pincers

Restaurateurs aren’t crying wolf when they contend that a shift to a higher pay scale would strain their viability, says Joel Naroff, the economist who serves as the economic advisor to industry researcher Black Box Intelligence.

But they’re in denial if they think their economic realities are going to temper the push for higher wages, he suggests.

“The days when you could pay someone a restaurant minimum wage and expect them to survive on tips and that minimum wage is not over, but it’s starting to fade and it’s going to continuously fade,” Naroff says. “In some ways, the pandemic accelerated a discontent that was always there.”

Part of that discontent arises from working conditions as much as pay, he stresses.

“The restaurant industry has always had a high turnover rate, and that speaks to the fact that its jobs are not satisfying,” he says. “They’re going to have work on pay and working conditions simultaneously.”

Given the industry’s low margins and reliance on scheduling practices that favor the employer, that won’t be easy, he says. He predicts a long evolutionary process, a constant for some time to come.

“When you’re always living on the edge, as many restaurants do, it’s a tough balance,” says Naroff. “There’s this real tension between survival and employee satisfaction.”