One scene in the “The Wizard of Oz” provided a glimpse of the work life residents enjoyed in the Merry Old Land of Oz. They sang: “We get up at twelve / And start work at one / Take an hour lunch / And then at two we’re done!”  Even the most Oz-like company can’t promise such hours in the real world. But the best employers in the business provide something far greater—benefits that matter to real people, a “no-place-like-home” culture and a road toward growth. 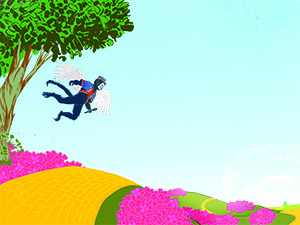 Any human-resources type can string together warm and fuzzy words about their company’s values, team spirit and culture. It’s one thing to evangelize; it’s a harder thing to act on those ideals and get employees to internalize them. Making it work in a system, across thousands of people and hundreds of units day after day after day takes concrete initiatives and great communication—not only from headquarters to each store but also from the bottom up.

The restaurant companies that do it right are models for the rest. To cut through the fuzzy and find the wizards of the industry, we turned to People Report, a TDn2K company that tracks workplace metrics such as turnover, diversity and compensation in the service industry. People Report’s annual awards recognize those operators who ranked highest in retention, diversity, community involvement and other criteria. We spoke to a few of the most recent honorees to find out what they do for employees that both resonates and earns results.

Pay no attention to the man behind the counter

Asked why he dons an employee uniform and dishes out chicken, mashed potatoes and gravy every Thanksgiving Day at a different Boston Market store, CEO George Michel—known inside the company as “The Big Chicken”—told Business Insider that it’s tradition and a way of leading by example. “I’m in the field a lot, and I spend a lot of time in our restaurants,” he said. “That’s where I started, and that’s where I feel very comfortable.”

Michel’s presence in the stores is part of a larger effort among the leadership team at the fast-casual chain. The last three and a half years have marked a shift in the way Boston Market communicates and interacts with its employees, says Randy Miller, chief administrative officer and general counsel. “We’ve been very focused on cascading our mission for the company and the values of Boston Market. In years past we weren’t successful at getting to the folks who are really on the front line of the organization.”

What’s changed? “There’s much more interaction from the top down in the restaurants,” Miller says. In 2010, the leadership team undertook a roadshow: They pulled every staff member into a three-hour meeting at a hotel and served them the chain’s new food items on plates to introduce them to operational upgrades. “We explained why we were making the changes and why they were important.”

Executives are not only going in to review operations, says Miller. “More important, they’re listening to our team members.” In the process, Boston Market employees have served up solutions to problems that have improved operations. It was a staff member who pointed out that new ramekins the company supplied for serving side items were too large, causing servers to inadvertently overportion meals. In-store staff also came up with the idea for Market Bowls, which the company introduced two years ago.

Listening to the folks in the restaurants has allowed them to feel more like business partners with headquarters, says Miller. “That interaction has enabled us to communicate our values and allowed them to stick.”

It’s also raised awareness of the company’s offerings for employees on the hourly and managerial level. Those include wellness programs and education, bonuses and the Boston Market U training program designed to foster advancement within the company. “We’ve gotten more rigorous with succession planning in the last 18 months,” Miller says. Managers at each level take an active role in spotting and developing future talent.

Does it pay off for the company? “I know it does,” says Miller, referencing 39 months of consecutive sales growth as evidence of the contribution recent initiatives have made to the bottom line.

Pensions and profit sharing and limos, oh my!

When executives of the family-owned burger chain heard from employees via its biennial survey that they desired a quick way to share thoughts and ideas with the Ingram family (owners of the privately held QSR), they responded in kind.  “[Team members] didn’t want to necessarily do it in a formal way or have to call HR,” says Jaime Richardson, vice president of the 93-year-old chain. The result was the creation of a “My Voice at White Castle” direct email account. All emails submitted land in the in-boxes of White Castle’s president Lisa Ingram (a fourth-generation family member who assumed the role in February 2013), Chief People Officer John Kelley and Richardson, and one of them responds quickly. Through the email, employees have shared everything from praise for another year of Christmas bonuses to suggestions for policy changes. “Simpler is better,” says Richardson, adding that being responsive and friendly helps bolster the culture of respect.

Smaller initiatives such as these are easily overshadowed by White Castle’s longer standing and widely lauded perks. A winner of People Report’s Best Practices Award for five of the last eight years, White Castle has offered health benefits to its full-time employees since 1924, with approximately 80 percent participation today. The company also offers a pension—an increasingly rare perk in today’s job market—a bonus pool and profit sharing.

Richardson credits White Castle’s benefits package for its low turnover, which is at 57 percent companywide and 5 percent among general managers. “Hourly wages are important, no doubt, but our team members rank that sixth,” says Richardson. More important, engagement survey results show, is the health care benefit. “When you think about the benefits and the Christmas bonus, we’re able to exceed their wealth expectation,” he says.

More than a quarter of White Castle’s workforce has been with the company 10 years or more. Longtime employees at all levels enjoy a trip to the home office, limo rides and a banquet when they hit 25 years of continuous service.

Richardson says all of White Castle’s offerings are in keeping with founder Billy Ingram’s vision for “providing freedom from anxiety.” But White Castle’s reign in this area could come to an end if the company, which has been outspoken in its opposition to components of the Affordable Care Act, turns to part-timers for future hires, as it has warned. White Castle estimates that its health insurance costs could rise by 35 percent if there’s no change to the 30-hours definition of full-time-equivalent employee, under the law. Richardson would like to see it raised to the industry’s definition of 40 hours per week. “We are very concerned,” says Richardson. “[But] we are hopeful it will have a chance to be changed.”

Seeing Chili’s deliver this year on its goal of raising $50 million for St. Jude Children’s Research Hospital in Memphis, Tenn., it’s easy to forget that it began with one employee.

The relationship was initiated in 2002 by a manager doing a fundraiser in Memphis to give back to the community, says Jennifer Hartley, vice president of PeopleWorks for Chili’s. A seven-store fundraiser became a regional effort. Eventually, it went national, and the company in 2006 committed to raise $50 million for St. Jude in 10 years—then delivered on that goal two years early.

“All of this is birthed through the people,” says Hartley. “It’s not something we give them and shove down their throats. They bring it to us; they elected to make it a national charity.”

Encouraging restaurants to lead charitable efforts tailored to their communities is the company’s M.O.—and part of the reason it won People Report’s Heart of the Workplace Award recognizing companies that make a difference in employees’ lives and in their communities. Corporate-sanctioned programs such as “giveback nights” allow a percentage of the store’s profits to be diverted to local charities. “General managers are empowered to say what the need is where [they] are,” says Tony Bridwell, senior vice president of PeopleWorks for Brinker International, Chili’s parent.

To motivate employees to get involved, each store elects a “Hope Captain” (often spotted in a “Hope Captain” t-shirt), whose role is to help encourage and inspire fellow team members to stay focused on the goal, be it soliciting participation in the annual systemwide Create-a-Pepper campaign for St. Jude or some other effort. Opportunities to contribute also are conveyed in daily in-store team huddles, and workers who sign up for corporate updates will receive reminders via text message.

Employees’ individual efforts also are matched by Chili’s in hours or dollars. “You can go into any of our restaurants and find stories of team members donating tips for the night,” says Bridwell. And team members at the “restaurant support center” (a.k.a. home office) in Dallas model that behavior by volunteering monthly at a nearby food bank. “We serve our guests but we also serve our community. There’s such a passion there,” Bridwell says.

How does it affect the bottom line? Bridwell points to the fact that Brinker’s stock has enjoyed a 1000 percent increase from $4 a share in 2008 to $46 a share today, since implementing a fundamental shift in the company’s culture and rolling out its five core beliefs—among them, “Win together” and “Own it.”

Heart of the workplace award
Chili’s