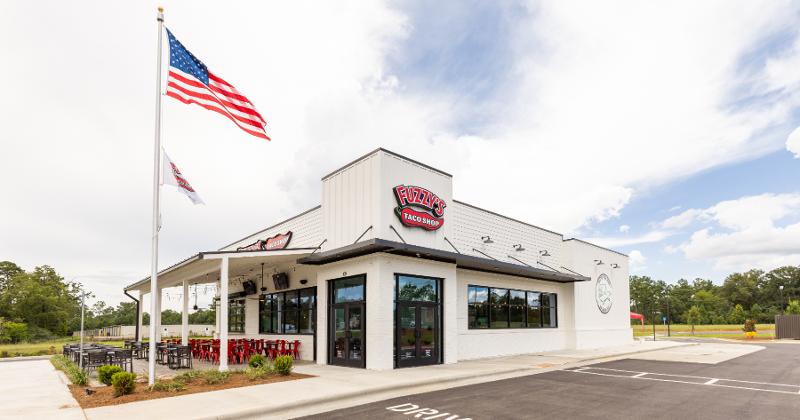 When Dine Brands CEO John Peyton visited the chain for the first time, in Denver, its self-styled “bad-ass” persona came through loud and clear in the form of upbeat music, vibrant decor and a bustling dining room and bar. The food itself, which consists of Baja-inspired Mexican staples: also “fantastic,” he said.

For the hospitality veteran whose experience includes two decades in the hotel industry, the experience reminded him of when Starwood Hotels debuted the W brand in the late ’90s, ushering in the idea of the “lifestyle” hotel with its edgy identity, sleek design and prominent bar.

“It hits you as soon as you walk in,” Peyton said of Fuzzy’s in an interview Monday. “It really struck me as a unique concept.”

That impression helped form Dine’s decision to buy the 138-unit Irving, Texas-based chain for $80 million, adding a growth concept to its duo of established brands in Applebee’s and IHOP.

Dine had been looking to add a third chain years before Peyton joined the company as CEO in 2020. Fuzzy’s, he said, checked a lot of boxes. It’s almost entirely franchised, which fits Dine’s existing model. It’s small but has room for growth. And it complements rather than competes with Dine’s portfolio. While IHOP specializes in breakfast and Applebee’s is more of a dinner destination, Fuzzy’s does 42% of its business at lunch, and 40% of its sales come from takeout and delivery.

“We did not want to compete in family dining with Applebee’s and IHOP,” Peyton said.

Indeed, as a fast-casual Mexican concept, Fuzzy’s is an almost entirely different breed than the two sit-down mainstays. But with its full-service bar experience, it shares some DNA with Applebee’s, and like both of its Dine siblings, it embraces value. Most importantly, Peyton believes it has the ability to become a nationwide brand in league with its much larger stablemates.

“We think the concept really plays well nationally,” he said. “We think it’s got a lot of potential.”

That number has shrunk over the past three years to 138. But with 125 new-store agreements currently in the pipeline, Peyton said Fuzzy’s is poised to start growing again. He believes Dine can help accelerate that growth by giving the chain access to its resources and scale.

“We believe that they grow faster with us than they do alone,” Peyton said. “That’s our goal.”

Besides that, he said, Fuzzy’s will continue to run much the way it has been under CEO Paul Damico, who joined last year, and COO Scott Shotter, who was hired in January. They’ll remain in charge, and Fuzzy’s HQ will stay in Irving, just outside Dallas, separate from Dine’s home in Los Angeles.

It’s a basic rule of good M&A, Peyton said: Find a brand with a strong team, make sure they come with, and don’t distract them once they get there.

With one deal under its belt, Dine did not rule out adding more concepts. “We believe this size and type of deal can represent a compelling M&A model for Dine Brands,” it said in an investor presentation Monday. But first, it will focus on Fuzzy’s.

“Our focus right now is to integrate Fuzzy’s, accelerate its growth and demonstrate that we can acquire a third brand, add value and help it grow,” Peyton said.

When a brand you admire drops the ball on customer service