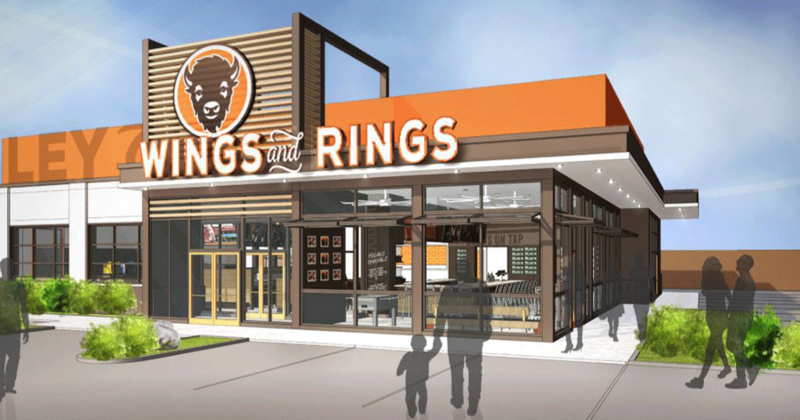 Someone interested in opening a Wing & Rings franchise now has a couple of ways to buy one.

They can do it the old-fashioned way, with $40,000 in cash. Or they can tap into their digital wallet and fork over 0.96 bitcoins (the going exchange rate as of Monday).

Wings & Rings is OK with either format. But it views the bitcoin option, added this year, as a way to get its feet wet in the fast-growing world of cryptocurrency, or digital money.

The 85-unit, Cincinnati-based chain is quite possibly the first restaurant brand to sell franchises in exchange for bitcoin. It is part of an overall brand refresh that includes a new name and look and a greater focus on technology, including a new POS system, app and tech-forward prototype.

“In the spirit of that evolution and embracing what the world of tomorrow brings today, we wanted to start wading into the waters and accepting bitcoin,” said Thomas Flaherty, Wings & Rings’ chief development officer.

To be sure, the chain is not expecting to get a flood of franchisees interested in paying with bitcoin. That’s kind of the point, Flaherty said. “We’re dipping our toe in the water vs. doing a cannonball, so to speak.”

But the news has sparked interest among prospective operators, including some who may not have otherwise considered the brand. At a recent multiunit franchisee conference, “I think it got some folks scratching their heads” and saying “Huh, that’s interesting,” Flaherty said.

"It’s not an age-centric thing," he said of the operator interest. "I thought that you would probably have a number of younger folks interested in this, but it’s been really kind of agnostic in age."

He noted that Wings & Rings has not yet completed a bitcoin transaction. And there are still some kinks to be worked out. First, there’s the matter of implementing the technology to accept the bitcoin. Then, the company has to decide whether to convert it to U.S. dollars or keep it as bitcoin and “roll the dice” on the volatile currency.

That will depend on how many bitcoin transactions Wings & Rings ultimately does. But, Flaherty said, “I think there’s an opportunity for us to hold onto it and then continue to evaluate that as you would your investment portfolio.”

There is risk for both sides. If the value of bitcoin drops significantly, for instance, the new Wings & Rings operator just got a good deal on a restaurant franchise, and vice-versa. But Flaherty, who has been investing in cryptocurrency since 2015, believes that what is now a largely speculative market will stabilize as the more popular coins become more mainstream.

He also did not rule out Wings & Rings one day accepting bitcoin payments from customers or using it to pay employees.

“I would say unequivocally and absolutely,” he said. “I believe it’s a matter of when, not if.” The “when” could still be five or 10 years away, he added.

Though more restaurants are wading into cryptocurrency, its overall penetration in the industry remains very low. Only about 1% of restaurants currently accept it as a form of payment, according to a recent survey by Technomic, and just 4% expect to do so in the next two years.